Raul Ruiz, a photojournalist who documented Chicano history during the turbulent era of the 1960s and 1970s died on June 13, 2019.  He was 78-years-old.  His work as editor-writer for publications he started like Inside-Eastside, followed by Chicano Student Movement, chronicled the growth of political consciousness among a new generation of upwardly mobile Latinos.

He later volunteered to take the reins of La Raza newspaper from Eliezer Risco and Ruth Robinson and began shaping it into a portal of current events. The latter publication at times printed 20,000 to 50,000 issues locally and its influence reached beyond Los Angeles.  Consequently, the accessibility of the paper inspired, to some degree, the creation of several Chicano college newspapers, like El Machete, at Los Angeles City College, El Popo at Valley College (Northridge) and La Vida Nueva at East L.A. College just to cite a few.

The most iconic photo attributed to Mr. Ruiz was that of a Los Angeles County Sheriff leveling a rifle loaded with a projectile toward the entrance at the Silver Dollar Café, on Whittier Boulevard, at the height of disturbances following the Chicano Moratorium rally protesting the war in Vietnam, at Laguna Park on August 29, 1970.

After the Sheriff launched the projectile the body of Ruben Salazar was discovered dead on the floor of the Silver Dollar Bar. The former Los Angeles Times editorial page columnist/reporter and KMEX-TV news director effectively articulated to the mainstream society the perspective of Chicano activists from the barrios.

Raul was born July 11, 1940 in El Paso’s Segundo Barrio, a neighborhood on the border city’s the south side. He attended public schools until he was ten during a time when the use of corporal punishment to discipline children heard speaking Spanish on school grounds was fairly common practice. The family moved to South Los Angeles where, Raul—according to numerous biographical accounts—often felt isolated.

He gradually found his footing,  a social circle and got married. The brief matrimony produced a daughter, but ended in divorce. The future movement firebrand would never remarry.
In 1961, Raul enrolled at Cal State Los Angeles, graduating with B.A. in 1966. He credited Latin American Studies Dept. professor Tim Harding for opening his mind to the struggles of working class ethnic minorities.

On campus, he met and befriended movement activists while reporting on civil rights, police abuse, school reform and the discriminatory practice of tracking Latinos away from academics. Alongside them, he distributed copies of Inside Eastside and later Chicano Student Movement—two early small-scale publications—at the local high schools and junior high schools. Sometimes, they distributed leaflets or small chapbooks with writing that got them branded as subversives by authorities and law enforcement. Ironically, it was this designation as subversives that they were most proud of.

These activities were precursors to the 1968 Walkouts (Blowouts), when thousands of students from the numerous East Side schools shook the establishment by leaving classes simultaneously in the middle of the school day as part of a massive yet well-orchestrated,  week-long student protest. When young Raza, who for years had been thought of as quietly passive and obedient people, broke the mold of perception by staging the largest student strike in U.S. history, it was to the benefit of all of us.

So, it is important to know that parents and adult community residents were involved behind the scenes to shape the protests and also anticipate the strong response from the system that came in the form of indictments on leaders like Lincoln High School teacher, Sal Castro. Facing criminal charges, the group became known as the East L.A. 13.

Ruiz, surprisingly, was not among those indicted, but he was deeply involved in efforts to organize a legitimate defense for them as a member of the Educational Issues Coordinating Committee (EICC), formed with some of the local parents to represent the community in talks with a recalcitrant Los Angeles Board of Education.

The EICC introduced the concept of bilingual/bicultural education as just one demand within longer list calling for smaller classes, Mexican-American guidance counselors, parental involvement in education, history books that included accurate depictions of Mexican-Americans, and the construction of new high schools to handle obvious overcrowding. All demands were denied except one: amnesty for all students that walked out. Two years later, all charges against the ELA 13were dropped—the judge ruled that it was not a crime to conspire to improve education!

In retaliation for the judgement in favor of the students, the Board removed Sal Castro from his teaching position. Ruiz and 50 others staged a marathon sit-in calling for his reinstatement at the Board of Education meeting room that lasted five days before a threat to arrest was issued. On the sixth day, police entered and arrested the remaining 35.

Over time, community pressure prevailed, and Sal Castro was reinstated. Additionally, the board established the Mexican American Education Commission which would function as an advisory group to the School Board and make recommendations based on student and community needs and input. Raul Ruiz was among those appointed to serve on the newly formed commission.

Soon after August 29th Chicano Moratorium manifestation the Los Angeles County District Attorney convened a public inquest on the death of Ruben Salazar. The eight-day hearings were televised locally. The most important witness was Raul Ruiz.  The courtroom was packed with movement people who at times broke decorum when it became obvious that the hearing officer, one Norman Pittlock, was only a shill for the system, asking inane questions like “who is Che Guevara?”

It was all a set up. No police official would be charged for the “murder” of reporter Ruben Salazar. Nonetheless Ruiz held the moral ground in court with his testimony and photos. La Raza newspaper later transitioned into magazine format wherein staff photographers graphically portrayed the sequence of events. 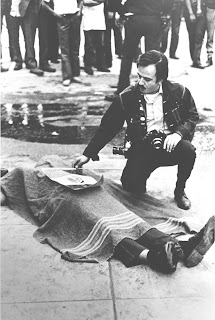 Nearly fifty years later the photos by Ruiz, Luis Garza (who took the photo to the left on Jan. 31, 1971 when Gustav Montag, a bystander at a protest march g was killed by “accidental” discharge of an L.A. County Sheriffs Deputy firearm), Oscar Castillo and at least nine other contributors were exhibited at the Autry Museum as part of the Pacific Standard Time regional art project initiated by the Getty Foundation. According to Garza, who helped curate the historic collection of images, roughly 200,000 people attended the exhibition, breaking all previous Autry exhibition attendance records.

More importantly, it was the first time such a sizable group of Chicano photographers had work presented by a major museum. Because of the overwhelming response, the Autry extended the exhibition several months beyond the original closing date.

Ruiz’ overriding interest was social change and the empowerment of our people who had no Los Angeles City Council representation; Edward Roybal had long ago moved up to the US Congress and the rare California State Assembly person in office of Hispanic descent were unremarkable and ineffective as leaders.

Add to this dire situation created by the attitude of many within the Democratic Party that took the Hispanic electoral vote for granted—an odious attitude that did have an official terminology: Mexican-Americans were referred to as the “hip-pocket” vote. Just pull it out at Election Day; no need to make promises to this constituency, no need to barter—true story. Compounding injury with insult, the big honcho of the LA County Democratic Party told us to “wait, you’ll get your turn.”

That mentality did not fly with Ruiz who was encouraged by others to run for office under the nascent La Raza Unida Party, a new trend proposed by either Corky González at the Denver Chicano Youth Conference or José Ángel Gutiérrez of Crystal City, Texas. Organizers then acquired the necessary signatures to qualify the Party for a special election in the 48th California State Assembly race to challenge the two-party-system. The anointed Democratic candidate was a young neophyte named Richard Alatorre, political aide to Walter Karabein.

One day Alatorre came to La Raza Magazine headquarters in City Terrace with the apparent intention of convincing Raul to acquiesce, drop out of the race. The meeting didn’t go well. I was there as well Patricia Borjon, a staff member, to witness this inevitable and historic moment. Alatorre assumed that as he was the chosen one, he deserved the inside track. To Ruiz, this claim seemed ludicrous. The establishment’s boy had no credibility in the community, was not involved in the on-going battles with the institutions. The meeting ended with Ruiz crossing his arms and refusing to shake hands. He declined to feign civility when his opponent represented the paternalistic powers that kept us in our place.

Both men qualified for the run-off. No one could recall if a Republican had ever held office in this heavily Democratic district but the shocking defeat of Alatorre opened the door for Bill Brophy (R).
Ruiz got 2,778 votes (8%) that tipped the balance to Brophy and brought the charge of “spoiler” to the candidate for the Raza Unida Party.  Was this a political defeat for the Raza Unida Party? I suppose so. But it was also a victory because it put the Democratic establishment on notice that we could influence the outcome of an election, even if it meant causing havoc.

The significance of this was the inevitable consolidation of power in the rising Chicano establishment politicians. Alatorre did okay. Winning future elections, becoming a Sacramento power broker and dropping back down to Los Angeles City Council—he made the circuit for years before melting down with personal problems and accusations that tainted his legacy. Ruiz ran again in 1972 for the 40th California Assembly District that also contained a chunk of East LA, garnering 5000 votes (13%) before losing to incumbent Alex Garcia.

The run of La Raza Unida Party fizzled out like all third party efforts do, but also educated large numbers of young people about the political process. Raul Ruiz did well also.  He taught for 45 years mostly Chicano Studies at Cal State Northridge and received Masters and Doctorate degrees from Harvard University.

Like just about everyone in leadership roles Raul drew criticism.  Some thought him aloof and arrogant, but no one could accuse him of being pretentious.  Raul was authentic. He was writer, photographer, teacher, mentor, lecturer, and an organizer, among other vocations. Much more could be said about his exploits and far-reaching influence. Sadly, he has passed onto the pantheon of Chicano heroes and heroines.

He gave much of himself to advance the cause of La Raza. As his coffin was being rolled out of the memorial service, a spontaneous “Chicano hand clap” broke out in tribute. He was interred at the San Fernando Mission Cemetery. To learn more about Dr. Raul Ruiz read Mario T. García’s book: The Chicano Generation: Testimonios of the Movement; University of California Press (2015) from which I gleaned much information, as well as drawing from my own experiences in the movement as a young partisan.
at 1:36 PM
Share