Showing posts from September, 2014
Show all

by Citlalli Chávez   On a recent warm LA Friday night, in the heart of Boyle Heights, loyal fans and supporters of Viento Callejero packed into the MBar to celebrate this up-and-coming band’s much-anticipated CD release party.    The celebration was a culmination of a recent crowdfunding effort organized through a Kickstarter campaign in which community contributors, organized primarily through social media platforms, raised over $8,000. The money allowed this trio to showcase their diverse musical backgrounds and talents with the release of an eponymous CD.    Composed of three permanent musicians, Gloria Estrada (formerly of La Santa Cecilia) on guitar, Federico Zuniga, Jr. (Grammy-nominated Sistema Bomb) on the bass, and Gabriel Villa (Chicano Batman) on the drums, the trio manages to cover classic Colombian Big Band Cumbias infused with electric psychedelic sounds that give the band it’s unique and novel sound. Viento Callejero, as the name implies, intends to uplift and “sco
Post a Comment
Read more 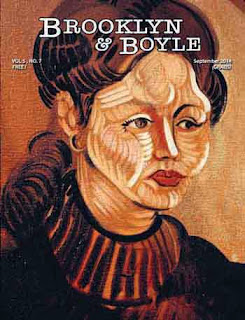 ​ Brooklyn & Boyle is very pleased to feature pioneer artist Roberto Chavez, a historic figure in the development of Chicano Art in our upcoming Latino Heritage Month edition. Chavez, the Chicano art instructor at East LA College will be the subject of a one-man retrospective at ELAC's prestigious Vincent Price Art Museum, a marvelous new addition to the campus where Chavez taught scores of younger artists who are now household names, among them Gilbert "Magu" Luján. We are literally only two weeks away from publishing what promises to be a riveting issue that will also include an article on muralismo in Highland Park and a history of the International Institute of Los Angeles, an organization that has provided services, assistance and advocacy to immigrants for one hundred years, among other stories that cover the vital communities that comprise the Greater East Side. As a friend, reader or simple supporter, you can help us celebration Latinio Heritage month wit
Post a Comment
Read more
More posts