Showing posts from January, 2018
Show all

She and He at the Movies 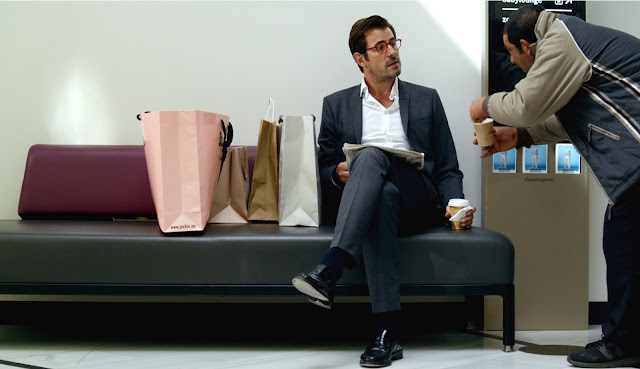 Claes Bang in THE SQUARE, a Magnolia Pictures release. Photo courtesy of Magnolia Pictures.  by Katherine Vallin and William Alexander Yankes The Square, winner of Cannes’ Palm D’Or in 2017, is a feature film by Swedish writer/director Ruben Östlund with actors Claes Bang and Elizabeth Moss. He: Shall we step into The Square? She: I’d rather view it from the edge. He: Unlike the title of this Oscar-nominated foreign film from Sweden, there are no right angles, nor straight lines in this feature production. She: The story hinges on a charismatic, womanizing museum art curator’s conundrums. He: Can you blame him? Women flock to him in droves. He doesn’t even have to really pursue them. She: This journey starts when a journalist confronts him with his own intellectually obscure commentary on art. Befuddled, he finds himself barely capable of making sense of it. He: There’s a comedic moment when the camera focuses on their respective facial expressions in reaction to
Post a Comment
Read more

Abuelita wields the almighty “chancla ” with experience and fortitude in COCO. Photo: Disney-Pixar   Review by Alci Rengifo Coco is that kind of family film that manages to tackle a tricky subject with heart and sensibility. Disney and Pixar have scored yet another visual achievement here, but this one is particularly notable for the way it uses Latin American culture to explore themes of death and memory. Visually, it is an enrapturing movie. The iconography of Mexico’s Día de Los Muertos (Day of the Dead) tradition is used with elegance and fun, capturing the tradition’s unique mixture of remembrance and celebration. The kind of romance associated with Latin folk culture is beautifully celebrated with dramatic energy. But this is a warm-hearted movie that probes deeper into the meaning of family and independence. It dives into Mexican culture with infectious gusto and joyous music, but its central narrative has a universal power. The story is set in the rural Mexican town o
Post a Comment
Read more
More posts