Showing posts from November, 2016
Show all

An Open Letter to Georgetown University

November 20, 2016
I am privileged to count myself among the graduates (SFS ’84) of Georgetown University’s School of Foreign Service. Georgetown graduates who enter the field of statecraft have traditionally been trained to represent American political and military interests, usually a euphemism for corporate profit and the power it exerts across the globe. I was inspired to pursue a career in the diplomatic corps to embrace the humanitarian mandate found within the venerable institution’s name itself: Service. Yet during my years at Georgetown, the notion of service was lost. My professors never mentioned it. Distinguished guest lecturers never referred to it. Students never talked about it. The lofty ideal of service was relegated to the teachings espoused by Jesuit priests on campus such as the late Father Richard McSorley, SJ., who extolled the virtue of peace as a diplomatic objective. Although Georgetown welcomes a substantial number of applicants from privileged means, it also opens its doo
Post a Comment
Read more NK-Riot, the performing entity developed by Kristopher Escajeda (l.), visits with Five Star owner Marco Cordova. by Alci Rengifo Marco Cordova is busy booking bands to play the Five Star Bar well into February. He just isn’t sure if there will still be a space for them to perform in by then. Cordova, owner of the well-known live music venue on South Main Street, is the latest small business owner to become the target of big business interests seeking to transform the face of Los Angeles. Last May, Cordova was astounded to find a Demolition Notice posted on his venue. Notices were also given to other neighboring businesses such as the Downtown Independent movie theater, a half blo k away. “All hell broke loose that weekend,” said Cordova at a nearby café on a Saturday night. “I was in awe. My jaw dropped.” The night club and entertainment establishment where the Five Star Bar resides was called The Columbine when it was purchased in 1971 by Cordova’s father, who passed away
Post a Comment
Read more 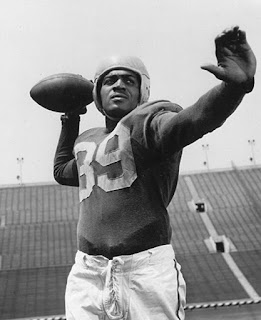 by Abel M. Salas On October 14th, Abraham Lincoln High School students, athletes, faculty, parents, alumni, athletic program boosters, neighborhood residents and several special guests celebrated the legacy of Lincoln High graduate and legendary African American sports figure Kenny Washington (August 31, 1918 – June 24, 1971) with a commemoration  program that has become a yearly tradition. From the sidelines and the bleachers facing the gridiron overlooking Broadway Ave. near Mission Road, a home field crowd cheered loudly for their cherished Tigers in a dramatic match with the visiting Franklin High Panthers. Referred to locally as the “Battle of the Big Cats,” the game brings the long-standing North East Los Angeles rivals together for an emotionally charged, yet amicable contest of skill, strategy and raw talent. It is the most important game of the regular season for both teams. In 2011, the annual duel became even more significant as the first ever Kenny Washington Memori
Post a Comment
Read more

Alé Strikes Out on His Own 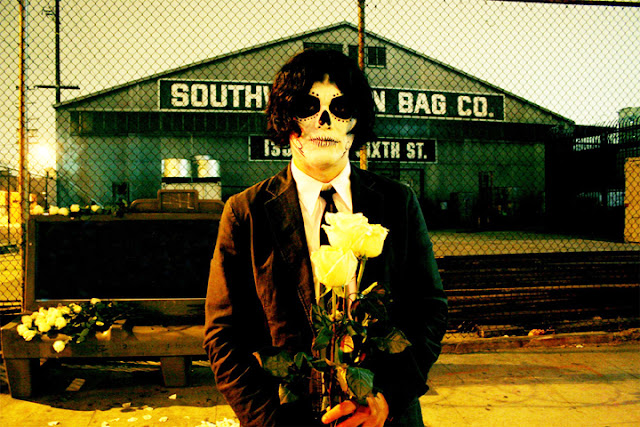 Alé poses for a Día de Los Muertos project. Photo by Wenceslao Quiroz.     by Abel M. Salas Alé pulls up in a small, well-worn, red pickup truck, a familiar green-and-white logo visible on the white paper go-cup clutched in his hand. “I’m so sorry. I should have asked you if you wanted something,” he says gesturing with the coffee he’s picked up blocks around the corner on Soto and Olympic. “You’ve never been here before? You mean I’ve never invited you over to see my studio?” he asks. “This is it. This is where all the magic happens,” says the Boyle Heights born-and-raised musician, songwriter, sound engineer and producer, leading the way up to the third floor of the four-story Downtown Rehearsal Studio. Built in 1923, the gray building occupies a space at 2155 E. 7th St. Directly to the rear of the structure, a parking lot reaches to the eastern bank of the concrete channel which, long ago, replaced the Los Angeles River. According to Alé, the structure once housed a
Post a Comment
Read more 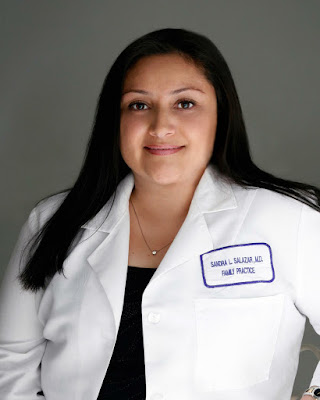 by Abel M. Salas Dr. Sandra Salazar, up for re-election as a member of the Cerritos College Board of Trustees, didn’t grow up on the Eastside. But as a resident of Norwalk, a mother of two young children, a physician who practices family medicine and an advocate for education, she is committed to creating pathways to success for students from South East Los Angeles. Raised near Culver City and Venice, Salazar is one of two girls born to a father from Zacatecas who worked as a gardener and a mother from Guatemala who cleaned houses in Malibu. “My father passed away when I was 12, so I was raised by a single mother,” said Salazar. Eventually, she recalled, her mother saved enough  to put a down payment on a small home in South Central Los Angeles. “That was really the only area where she could afford to buy in,” Salazar continued. Reluctant to take her and her little sister out of schools they were already attending, Salazar’s mother drove them to class every morning on her way t
Post a Comment
Read more
More posts