For Your Consideration: Documentary on Anti-Gun Violence Mom to Screen in L.A. 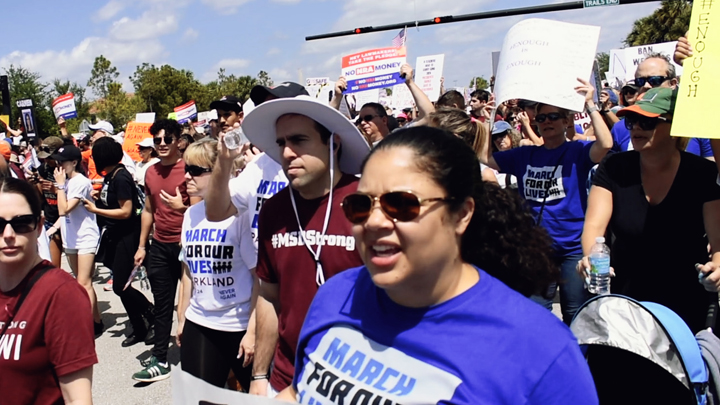 Cindy Polo, moved by school shooting to seek office, is the subject of a short documentary coming to L.A. Photo: Adam Schlachter

A few years ago, I came to the realization that life had thrown me a few lemons.  After a few brushes with death, a couple of failed relationships, joblessness, depression, and catharsis, those experiences failed to yield a single drop of lemonade. Fruit juice aside, it was time to seek redemption.

Then a tragedy struck a small town near my home…  Parkland.

On February 14, 2018, a former student opened fire at Marjory Stoneman Douglas High School, murdering 17 people and injuring 17 others.  In a mid-term election year, military-style weapons were immediately thrust into the national spotlight.

Upon hearing that a bus chartered by a group of social activists from Miami, where I grew up, was two hours shy of departure for Tallahassee, the state capital, I quickly showered, packed a bag, and—with just a few moments to spare—bought a back-up battery for my Nikon. It was a no-brainer.  When one is looking for a purpose, one will find it somehow.

What was the purpose of this trip, this journey being undertaken by a contingent comprised of primarily female students and parents?  At around 2 a.m., as my camera glided over them, capturing quiet images of these resting passengers, varying opinions on the gun reform issue became audible.  That was when I met Cindy Polo, a stay-at-home mom, “Girl Power,” a high school “DACA Dreamer,” Irene, and Paola. The foursome shared a singular conviction that something needed to be done about guns. “I can vote, I can post, and maybe I can run.”

After eight hours or so, we arrived at the capital city.  The passengers congregated with random activists from across the state gathered in a large hall at Florida State University, my Alma Mater. They listened to impassioned speeches, and finally marched to the Capitol Building to voice their concerns to their respective elected officials.  Although it rained hard that afternoon, not a single soul broke for cover.

“Girl Power,” 17-years-old, whose real identity I will protect, carried a sign with the locations where gun violence had erupted along with the corresponding number of victims during the previous decade, tragic events she had always felt helpless to do anything about…  until that day.

Inside the Capitol, constituents attempt to meet with their elected officials, to no avail.  They voice their frustrations with office assistants and interns who steadfastly guard their bosses, unavailable due to their closed meetings with lobbyists.  But the Congressional Chamber is standing room only.  Overflow activists are forced to sit outside and listen to concerned speeches via a closed-circuit television set.

“One day my son is going to ask me what I did after 17 seventeen people were killed...  And I cannot look at him anymore and say that I did nothing,” Cindy Polo tells an assembled crowd when it is her turn to speak.

From the darkest tragedies come the bravest voices.

I followed up with Cindy about a month after.  When she told me that she had decided to run for office to honor her son and in memory of the fallen, I knew I had to continue documenting her story with my own weapon of choice:  my trusty movie camera.

Before and during the “March for Our Lives,” Cindy described the new challenges she would face. She and her family marched along with thousands of concerned citizens, paralleling the newfound activism of “Girl Power,” whose familiar sign depicted a rallying cry seldom heard from her generation.

After months of canvassing, Cindy discussed her journey as a political candidate, visiting polling stations, embracing her volunteers, and encouraging voters to choose her.  Her husband, son, and best friend all supported her enthusiastically. 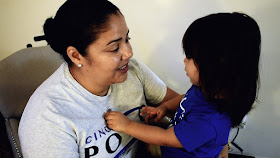 When the primary polls closed on August 28, 2019, she reached out via social media to all her staff and friends, anxious about the results that would be announced shortly.  As she rushed into a restaurant party, instead of looking for a screen with election returns as expected, she chose to embrace her baby boy, reminding herself and those around her of the reason she had run for office to begin with.  And rather than spoil the film for you, I encourage you to watch it when it plays near you.

Because of the immediate nature of the subject matter, I was limited in crewing.  But that also allowed for near “carte-blanche” freedom to film in areas and at events usually only reserved for mainstream media. The intimacy of several moments would have been impossible with a larger production.

In other words, to get to the heart of the matter and capture the “real life” stuff, I had to remove some of the distracting production requisites.  And in doing so, I picked up new skill as a listener, offering each of my subjects only the following question:  “Why are you here?”  It was all I needed to ask.

My strongest asset as a filmmaker has always been the ability to make quick, instinctual decisions that improve upon the story at hand.  Every documentary will present editorial and sound issues or challenges that must be resolved or overcome, but it is in knowing the footage, the juxtaposing of images, and clever problem-solving that a little masterpiece can emerge unexpectedly.  After twenty-five years making films, I know why I was put on Earth.

The Parkland massacre mobilized a powerful millennial movement I had not witnessed before and had only heard about in stories of the 1960s and civil rights causes.  In production, I felt the best way to document the expression of an individual’s first amendment rights would be to capture their personal journeys, specifically their own motivations to fight for gun reform.

Given that the film’s protagonist is an American-born woman of Latinx heritage who decides to run for public office, I want it to serve as a symbol of empowerment for all women. There are several homemakers who star as supporting characters in the piece that echoed Cindy’s concerns. Equally critical were the perspectives of many high school and college students.

I became acquainted with so many activist groups, many I had never even heard of before. What an eye opener it was to interview them, thriving in our diverse communities and as proactive as their needs call for.  That these citizen-activists trusted me enough to open their homes and share their lives candidly—welcoming me with arms wide open—was astonishing.

If more women and college-aged young people are moved to become social activists and political candidates after watching my film, any award the film earns might actually seem slightly pale by comparison. Please do not misunderstand me.  I would never turn down an award for film.  I love film.

But I was entranced by the instant community these citizens created in the process of trying to let their elected representatives know that gun control legislation was an urgent issue for them. When the politicians ignored their concerns, they took it upon themselves to pray, vote, march, post, and, as was the case with Cindy, run for public office.

It is a fact the Latinx population comprises a disproportionate percentage of the victims of gun violence in the United States.  The election of Donald Trump showed that there are forces of hate who wish that we would disappear forever.

This project demonstrates grass-roots democracy at its finest:  If you are a citizen who feels stymied by the system, all it takes is for you to find a common community, and you can inspire change.  If you run for office and actually win the election, you can literally start creating change at the policy level.

This is not an effort to create further political division but rather an attempt to call for intelligent, respectful discourse between those on all sides of the gun issue.  I hope the final version of the film inspires more youth and parents to get socially engaged.

It is crucial that registered voters in the U.S. see this film before the upcoming elections. Who knows?  Maybe it will speak to those who feel left out by a broken socio-political system and help swing a vote for the benefit of the people.  America needs that now.

So back to this redemption thing…  it turned into a new life purpose. You want to know how to turn an extreme tragedy into a positive experience? Ask me. Making this film, perhaps the most significant work I have ever produced, was a case in point.

And The Brave Shall Rise is directed and produced by Adam Schlachter; produced and edited by Van Kassabian; and presented for film awards consideration in all pertinent “Best Short Documentary” categories by Anne Clements and Hoan Tran.

A special Presentation and Reception for the film as part of the “NewFilmmakers LA” Festival will be held on Saturday, September 14, 2019 at 8 p.m. at the Academy’s Mary Pickford Buidling Linwood Dunn Theatre, 1313 Vine St., Los Angeles, CA 90028. Tickets are available at www.newfilmmakersla.org