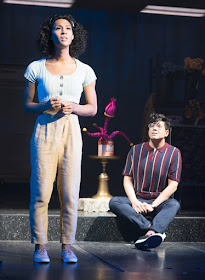 Perennial Off-Broadway and Broadway favorite, Little Shop of Horrors—a darkly comic rock musical with music by Alan Menken and a book by Howard Ashman based on the 1960 classic cult film by legendary B-movie director Roger Corman made from a screenplay by Charles Griffith—is enjoying a national resurgence with revival productions sweeping both coasts simultaneously from Pasadena to New York City.

There’s no doubt that Pasadena’s unique version—directed by Mike Donahue and starring George Salazar and MJ Rodriguez—is a certifiable hit. The current West Coast incarnation is addictive comedic fun that satiated a full-house on a recent Thursday night and had the audience screaming with appreciation for the by now familiar rock & roll, doowop and Motown-inflected musical numbers. (Pictured at left: MJ Rodriguez stands and George Salazar listens. Photo by Jenny Graham)

For those who don’t know the tale, it’s a simple one. Little Shop follows meek plant store worker Seymour, his co-working crush Audrey I, her sadistic/abusive dentist boyfriend and the blood-thirsty plant (Audrey II) that threatens them and the world as they know it. The Skid Row flower shop adds to an already formidable arsenal of visual and auditory salvos that tantalize the senses with songs, lights and beats. The foot stomping kind, interspersed with moving ballads.

What sets this version of the show apart from previous or current productions anywhere else is how it came into being. Donahue, a rising director heard about an emerging star and they met last December over coffee to discuss the casting of Audrey. He didn’t know if MJ (who transitioned to Hollywood fame this past year on the Ryan Murphy’s FX Pose) would take the role. She thought he wanted her to play the plant. Rodriguez’ role in the show is like a house-mother to mostly LGBTQ artists trying to co-exist in the NYC ’80s scene. The play was also cast with an eye toward reflecting L.A.’s ethnic diversity more accurately.

“George, our Seymour, is of Filipino and Latino descent. The plant is a woman, and it’s always stereotypically played by a male,” Donahue has said. Rodriguez points out that, “These are new things that I feel like people in the audience need to see, to see that there are so many ways that you can bring life to these characters and not just by a specific role played by a specific race.” Her comments mirror the director’s approach, which was to let the usual 1960s backdrop give way to a modern Manhattan. “New York right now is incredibly diverse,” Donahue says.

The plant is a woman, defying past stereotypes while adding new layers. The woman behind the plant, African-American actress Amber Rile, had a role in the Golden-Globe-Winning musical comedy Glee. Her voice is complimented by those of two other Black cast members, Britanny Campbell and Tickwanya Jones, powerhouses who exert a cohesive force between the action on stage and the musical interludes. Riley’s plant is a nuanced choreography of all things maternal. Cheyenne Isabel Wells as the third skid row school kid is a crooner and belter worth the price of admission alone. A magical all-seeing chorus, indeed.

Kevin Chamberlin as shop owner, Mr. Mushnik clearly earned his three Tony-Award nominations with real chops. Matthew Wilkas in various turns as the boyfriend/dentist, Dr. Scrivello is deliciously delirious and oh so delectable in the multiple roles he plays as a heavy-lifter with an impressive range, resulting in a smaller than usual group of players in a show that has become a staple of community theater precisely because it does not require an army of actors, singers or dancers or elaborate, swirling sets and over-the-top costuming.

Iconic Ellen Greene’s performances as Audrey in the original off-off-Broadway production of Little Shop of Horrors aren’t meant to be replicated, and MJ does a wonderful job showing us both the tender and strong-willed woman she needs to be while suffering abuse.

The hilarious irony of the following lyrics in one particular tune, “I cook like Betty Crocker and I look like Donna Reed” is not lost on the audience, which revels in the additional layer of humor the non-traditional casting ignites. While there is much that can be said about how much this benefits actors of a certain color, sexual orientation or gender identification, be they Trans, Cis or fill-in-the-blank pronoun, but what truly makes a great show memorable is really good showmanship and this show has it all.  Little Shop of Horrors runs through October 20th. Tickets can be purchased online at the following website:  www.pasadenaplayhouse.org. They can also be ordered over the phone at 626-356-752 or purchased in person at the Pasadena Playhouse Box Office, 39 South El Molino Avenue, Pasadena, CA 91101

E.M. Fredric, an accomplished screenwriter, producer, actor/advocate and prominent journalist, joins Brooklyn & Boyle as an Associate Editor and a very welcome addition to a venerable team of community-based contributing writers. We are pleased to be working alongside her and are grateful for her energy and dedication. She blogs and posts at www.EvaMarieFredric.com
@EvaMarieFredric