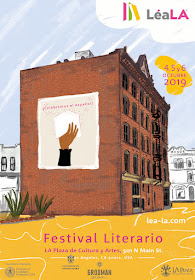 Ending a four-year hiatus, LéaLA—the unique literary event presented successfully in downtown Los Angeles by the University of Guadalajara Foundation USA under the auspices of the Guadalajara International Book Fair (FIL) in the years 2011, 2012, 2013 and 2015—returns to L.A. this month. Organized as a celebration of Spanish-language letters, the festival was launched with considerable expectation as the “sister” or satellite edition of the literary festival held annually in Guadalajara, Jalisco. Founded there in 1987, the “Feria Internacional del Libro” is the largest and most important publishing industry trade show, book fair and literary event in the Spanish-speaking world. Globally, it ranks second only to the one hosted yearly by Frankfurt, Germany.

The anticipation which accompanied the arrival of LéaLA was justified. Latinx Angelenos flocked to the L.A. Convention Center by the thousands to peruse Spanish-language titles from among the catalogs of over 200 publishers who had come to Los Angeles and participated as exhibitors in the book fair, a principal aspect of the massive undertaking. According to a Publishers Weekly article by Leylha Ahuile, plans to bring the popular festival back in 2017 were derailed by a drop in the value of the Mexican peso relative to the U.S. dollar.

With “The Border and its Metaphors” as it central theme, a leaner and more intimate edition of LéaLA  opens on Friday, October 4th at 5:00 p.m. at LA Plaza de Cultura y Artes and runs through Sunday, October 6th. Free and open to the public, the festival features over 40 of the most prominent writers in various genres from throughout Mexico, Latin America and the U.S. Among the latter are writers who also work as translators of Latin American literature from Spanish into English or vice versa.

“We’re going to celebrate Spanish as a way of claiming our culture. So that people do not feel sorry to speak it, but quite the opposite: proud of a language spoken by more than 500 million people in the world, a language with enormous potential,” says Marisol Schulz Manaut, General Director of both LéaLA and the renowned Guadalajara International Book Fair.

The festival, more intimate and with less moving parts than ever before, Schulz explains, will also be highlighted by a live musical production called “Cada Quien su Frida, (To Each His Own Frida),” which stars acclaimed actress and human rights activist Ofelia Medina. A short form documentary titled “El valiente ve la muerte sólo una vez (The Brave One Sees Death Only Once” by Diego Enrique Osorno will screen at 1:00 p.m. on Sunday and represents the creative, experimental approach embraced by Schulz and her staff for the scaled-back iteration of LéaLA, an artistic direction which still leaves room for more traditional literary festival fare. Among the latter are a series of 15 one-hour poetry readings meant to compliment the panel discussions and lectures being offered as well as numerous workshops and learning opportunities designed to encourage play and stimulate the imaginations of children based on various age-specific topics.

Although LéaLA no longer includes the vendor market stretching the length of a soccer field that marked its auspicious beginnings, books written by the presenting authors will be available through an exclusive collaboration with the Librería Carlos Fuentes—owned by the University of Guadalajara—which will operate an on-site bookstand open from 10:00 a.m. through 7:00 p.m. for the duration of the festival. LéaLA concludes on Sunday with a dialogue between former Los Angeles Mayor Antonio Villarraigosa and Marcela Celoria, Consul General of Mexico for Los Angeles. Their discussion begins at 4:30 p.m. and is titled “From South to North: Latino Culture and Community in the U.S.”

Asked if the thematic focus of this year’s LéaLA was a response to the political attitudes toward Latinos among the close advisors to U.S. President Donald Trump, Schulz says, “Not expressly… because LéaLA was created in 2011, but we do understand that the situation which Latinos who live here find themselves facing is made much more difficult by the current political reality… so in that sense, promoting and celebrating Spanish is at the same time a vindication of our roots and our heritage, since we come from ancient civilizations and are heirs to an enormously rich cultural legacy. We have centuries of history, of tradition, and we should be proud of that culture that goes beyond what some voices detract or minimize.”

Abel M. Salas is the founder, publisher and editor of Brooklyn & Boyle. His writing as a journalist has appeared in numerous nationally and internationally prominent periodicals such as The New York Times, Los Angeles Times Magazine and The Austin Chronicle. A once and future poet, he has been invite to share his work at international literary festivals in: Havana, Cuba; Ajalpan, Puebla (Mexico); Mexico City, Malinalco (Mexico); and Zacatecas, Zacatecas (Mexico). His poems have appeared in Zyzzyva, Americas Quarterly, La Jornada, The Beltway Review and Huizache, among others.