To celebrate Día De Los Muertos and the Latino art community, Red Bull invited Southern California artists to submit designs for a concept called Red Bull Latagráfica- the Calavera Edition.  Artists were challenged to draw inspiration from the Mexican holiday and submit original artwork, with the top design to be immortalized on two million 12 oz. cans slated to hit shelves this October.  East Los Angeles’ native and current Long Beach resident David Flores has been announced as the winning artist.

The Red Bull Latagráfica concept gives an artist the opportunity to expand their portfolio and put their work in front of millions of consumers.  Flores’ design will virtually turn supermarket aisles and convenience store cases into mini art galleries in cities including Los Angeles, San Diego, Tucson, Phoenix, Houston, Dallas, Austin, San Antonio and Chicago as well as parts of Northern California.

Día de Los Muertos is a Mexican tradition where friends and family gather to celebrate and honor the lives of those close to them who have passed away.  Outside of the inspiration Flores received from some of his favorite artists including Rufino Tamayo, Diego Rivera and Salvador Dali, his Día de los Muertos design was mostly an homage to the flower and sugar skull-adorned alters of the tradition. 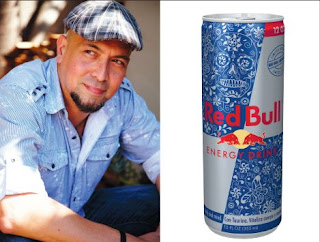 “I wondered what life would show me after death and this is what came to me,” said Flores.  But besides his favorite artists and the calavera traditions, Flores had a more personal connection to the subject matter, having lost his mother last year.

“One person I would want to share this moment with is my mother,” he said.  “I wish she were here to see this moment and have her be very proud of me. To me, Día De Los Muertos means celebrating and remembering my loved ones that have passed, to remember the beauty of their lives- it’s about their souls, which I feel are around me and are in my thoughts on that day.”

David Flores is an East LA native and self-taught worker of acrylic-oncanvas and paper mache. With his roots in surrealism, Flores’ goal when creating a piece of art is to bring his subject to life with the power of color rather than form. While he garnered some formal education with a mish mash of classes in high school and college, most of his practice seems to be attributed to his hard nosed hustle and ambition - on top of spending his free time drawing and painting, he’d seek out and enter competitions and
contests as often as he could.

His work has been shown at numerous galleries, including Gallery Azul in San Pedro, which Flores credits for being a big stepping-stone in the art world for him, and Gallery Expo in Long Beach.  Flores has also donated artwork to YWCA in Los Angeles.  For more information, please visit: www.redbullusa.com/latagrafica.