North of a Tree


Old man Pablo never missed a game.  Rain or shine, he stood there on the side of the field sipping his Yerba Maté, as if he was Uruguayan, or, a prisoner in one of the distant concentration camps everyone wants to forget. His head floated from one end of the field to the other, following every play.

The black and white checkered ball moved revolving in the opposite direction through the air as it traveled towards the left pole of the opposing team’s cage.  The play made him smile, but it was a contained smile.  Really, he felt like jumping up and down, even if it meant spilling the hot cup of ultra-sweet maté in his hand.  Seeing the left wing offensive player of his team, jump and with a fast motion of the forehead lose the sphere in the annals of the opposing team’s cage.

He was the first one there for all of the Sunday morning games. He made it to the indicated field before all of the players, coaches, sideline men, referees and spectators.  As players began to arrive, Old man Pablo was already involved in the ceremony of preparing his second maté of the morning, slowly pouring the boiling water from his black thermos into the cup filled with yerba, adding the sugar last.  He would pull out a white handkerchief and wipe the silver ‘bonbilla,’ which he always championed on the top-left coat packet of his jacket. It had been the only inheritance his father left him, whom in turn had received it from his mother, going back seven generations. 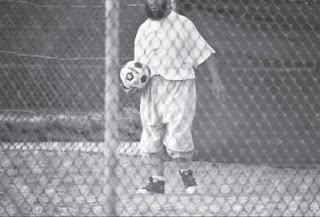 Old Man Pablo was a widower. His wife Sirena died months after he had been imprisoned in the concentration camp of Puchuncavi in central Chile.  He had never really liked soccer that much, and had hardly played it at all in his youth. He spent most of his childhood and growing up years working in the fields, rounding up cows, taming horses, feeding pigs, while the children of the land owners his age, played the ancient Chinese game.

In reality, what enchanted Old Man Pablo the most in life then, and what he did most with the little free time he had for himself, was to ride at withering speeds through the fertile valleys as he viewed the world from the heights of a fast moving horse.  Riding transported him with the galloping motion, the heat of the beast beneath him sweating through the skin, the soothing sound of an ancient drum deep in him as the horse’s legs tapped upon and elevated from the ground beneath.

Old Man Pablo spent three long years in captivity, and an incredible sense of solidarity among most, if not all of the prisoners helped a lot.  In a way, they were all lucky to be in a concentration camp, rather than in one of the old jail facilities of the country, where many more hundreds and thousands were imprisoned with “common prisoners.”  At least in Puchuncavi, they were all “PP’s,” Political Prisoners, or “PC’s” Prisoners of Conscience.  They were lucky their bodies were not amongst those in the common graves, or deep down in the bottom of the sea with a piece of railroad track tied around their necks, dismembered, banished, or disappeared.

It was in Puchuncavi, he fell in love with soccer.  The prisoners played as often as they could, the
teams were made according to each political party affiliation.  Socialists formed one team, while the Christian-Left and MAPU, fewer in numbers, joined forces to make theirs. The MIR always had the most number of young players on their team. It was not clear until the last minute, whether the Communists would participate since soccer in the eyes of most of the party members, was considered “ideologically problematic.” A lot of the soccer balls that were brought in with much sacrifice by family members ended up being kicked over the layers of chicken-wire fences towards the orchard, as the prisoners called it, planted with landmines.  A young prisoner, fed up with the regular and methodical beatings, kicked a ball towards the orchard and detonated one of the mines.  Since then, it became a common practice for deflating anger and frustration. At times, it was simply the thing to do to get a good laugh, the kind of satisfied laughter that came from seeing a soldier jump in fear.

One particular mini-tournament final was celebrated with a night of one-act sketches and music, provided by the prisoners very own and improvised musical group, The One-Thousand-And-One. One tall skinny musician playing the quena, followed by two short fat ones playing guitar and charango and next to a tall and skinny one, playing sampoñas and bombo. .

While in captivity, Old Man Pablo could smell the sea.  He knew it was there in the vicinity, especially at night.  He breathed in deep the Pacific Ocean breeze.  And he thought about all of the waves he and Sirena had contemplated together, every coming and going with the roaring foam on its crest, but she was no longer around and would not be returning.

In 1976, Old Man Pablo was thrown out of Chile and exiled to the United States.  It was not easy at the beginning.  Old Man Pablo had to learn how to drive.  He had to learn to speak Spanglish and get used to being called Mexican without really knowing much about the country he later learned to be “So far from god and so close to the United States.” Thanks to the UFW, he—along with other Chilenos—had the opportunity to get employment training. He became a computer technician in the newly born Silicon Valley. After years of dedication and hard work he was able to buy a small house for himself.

He drove a white Impala station wagon with a beige fake-leather interior.  The car was so big and long, whenever Old man Pablo got in it, something he did as if mounting on the horses of his youth, you could hardly see him. Soccer players nicknamed him “El Fantasma en Ruedas” or “Ghost on Wheels.”

One afternoon after years of working for the same company, and driving from home to work and back again day in and day out, he was unable to get home.  He found himself completely disoriented.  He drove around for hours near it, but could not find it. Confused and tired of going around in circles, Old man Pablo gave up and drove to the Sepulveda’s, a family of exiles who lived close by.  No one thought anything bad about Old man Pablo’s predicament, because of the lives they all had had to endure.  After a warm cup of tea and plenty of jokes about amnesia, old age and military pedagogical methods, Jorge, the oldest son led the old man back to his house.

After thanking Jorge and watching him ride away, he stepped onto the sidewalk and onto his front lawn.  He looked up at the few stars visible through the urban glare, stretched his arms, letting out a sounding laughter that echoed in the night’s shadows that quickly turned to tears rolling down the crevices of his wrinkled face.

The old tree in front of his home that had been his South and coordinate in the geography of the city, had been cut-down by the San Jose City Parks and Recreational Services.
Fiction Stories Leni Olivares North of a Tree October 2012 Volume 3 Issue 5