Las Cafeteras Let Everyone Know What Time it Is!

November 16, 2012
They are Las Cafeteras, a seven-piece ensemble born in El Sereno under the watchful care of Roberto Flores and his brood, a clan of family members—some only  symbolically adopted—that gathers still at a space called the East Side Café. Home to the spirit of collective cultural and political work, the East Side Café on Huntington Drive had long been an outpost of Zapatismo, progressive politics and a return to the roots of communal labor that seeks to uplift the needs of the many and eschew the glorification or gratification of the few.

Quiet and humble, Roberto Flores refused then and refuses still to be considered a patriarch. His has always been the spirit of collectivism. His own children, among them Quetzal and Xochitl and Angela Lucía, took those lessons… that kind of life learning gleaned as children of the movimiento and made music with it. 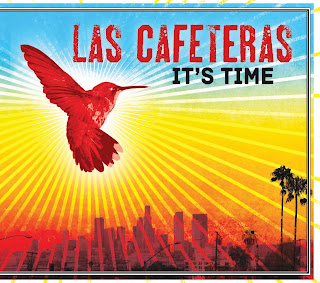 But it was not just music or even just movimiento music. It was black music, African music that had been molded and shaped by its marriage to indigenous Mexican cultures on the tropical shores of what is now known as the state of Veracruz. While not commonly known, only ten percent of the African slaves brought to new world were destined for the colonies that later became the U.S. The rest, 90% or more, were bound for Mexico and the rest of Latin America.  Nowhere is the African influence in the land of our forebears more evident than in son jarocho, a sound created by red and black slaves, human beings forced to labor under threat of whips, chains and guns.

Resisting their oppression at the hands of the colonizers and enslavers, they often came together, combining their respective musical and cultural traditions to celebrate freedom and liberation with joy. While their bodies may have been shackled, their hearts could still create, imagine and dream.
Son jarocho is thus, at its core, the music of protest and resistance, the music of the original freedom fighters who knew, even then, that none could stem the tide, the inevitable triumph of those who would reshape the world into a place devoid of violence, greed and oppression.

Although only three parts women and four parts men, they are still called Las Cafeteras in deference to those slave women who worked on coffee and tobacco plantations throughout the Americas. And the anthem which reveals the essence of their debut album release, a song titled “La Bamba Rebelde,” is a bold re-tooling of the traditional Mexican-American party track, a century-old song made famous in the U.S. by Ritchie Valens (Richard Valenzuela) and later given new life by Los Lobos for the Luís Valdez biopic of the “kid from Pacoima.”

In the Cafeteras version, however, the traditional son jarocho call and response dialogue directly addresses the poignant political issues that propelled Obama into the White House for yet another term. Jabs at anti-immigrant laws in Arizona and elsewhere, support for same-sex marriage, and an anti-war stance are just three examples of what give the song new teeth.

The group is comprised of Annette Torres on the marimbol, Denise Carlos on jarana and lead vocals, Daniel Jesús French on jarana and back-up vocals, Hector Flores on jarana and back up vocals and David Flores on requinto as well as quijada keeper Leah Rose Gallegos on lead vocals and José Cano on flutes and caja. Carlos, Hector Flores (brother of David), Gallegos and Torres also chime in with zapateado during the bands thrilling and universally popular live performances.
The opening track “El Chuchumbe” refers directly to a style of music and dance that was banned by the Spanish Catholic Church in colonial Mexico for its physically expressive, playfully romantic and flirtatiously suggestive lyrics or rhymes. Not only were the native and African slaves enriching the invaders, but they were being denied even life’s simpler pleasures

Produced by Aparato’s Alexandro D. Hernández Gutiérrez and Eguene Toale, It’ Time teems with the energy of Canto Nuevo and son jarocho fused at an East Side back yard happening in honor of a good cause, but it also vibrates with production virtuosity. Recorded at Bedrock Studios in Silver Lake, the album’s primary vocals are delivered by Carlos, Gallegos and French, the first two trading turns with haunting, torch-singer vocals that seem to have been schooled by exposure Lila Downs and La Santa Cecilia’s Marisoul Hernández and perhaps even Hope Sandoval.

The opening a cappella zapateado on “Café con Pan” is more than an invitation to dance in happy communion with Las Cafeteras. It is also a call to action as much as a preamble to the traditional “fandango,” a musical fiesta where composers of improvised décimas and dancers come together. “Luna Lovers,” the subsequent song, is a soft quiet reverie, a ballad that speaks to the sweet surrender that is love. It is a stroll through the landscape of yearning and eternal companionship, illuminated by the ancient grandmother in the sky. With the addition of French on vocals, the love song is a lyrical balance between the three voices and delicate, jarana string pucking (requinto).

Addressing a heavier, yet no less emotional subject, “Ya Me Voy” begins with minor chord flamenco-esque riffs created on the jarana (as a opposed to the guitar). The lyrics speak to exile, to the circumstances that lead to emigration and of the dreams that promise a better life. The song is a melodic reminder that leaving home for a far off land also fraught with danger and uncertainty.

By contrast, “It’s Movement Time” is a resounding hip-hop poem that underscores the history of race relation across the continent and the birth of civil rights struggles in the U.S. From Benito Juarez, who abolished slavery in Mexico, California’s United Farm Workers and the Chicano Brown Berets to imprisoned black activist Mumia Abu Jamal, murdered teenager Treyvon Martin and Chicago Young Lords, the rap is a roll call in support of progressive causes across the last century. Ultimately, it is a call for unity as we move forward in an era where poor and working class people of all colors and creeds need, now more than ever, to stand together.

As a whole, the collection of songs gathered is an erudite and musically potent blend that brings son jarocho, Chicano protest music, hip-hop and trova nueva together for a rollicking cruise through the future of Chicano-Latino music in Los Angeles. From music that speaks directly to the Juarez femicides in “Mujer Soy,” a moving song made all the more powerful by Cano’s Native American flute to “Trabajador-Trabajadora,” a tribute to the humblest of working people everywhere delivered in harmonious song and hip-hop rhyme, the album lingers like a searing vision that leaves brightly colored tracers of after-burn on the back of your eyelid. It’s time for It’s Time and it’s time for Las Cafeteras.
Las Cafeteras News Reviews