The Old Man & The Shy Boy


A Short Story by Clodomiro Calvo

The old man had enrolled in a workshop for beginning writers. The workshop was offered in a converted old apartment on the second floor of the J.S. Schirm Building, on the corner of First and Cummings, in Boyle Heights. Each Monday evening the old man grasped the rickety unstable handrail and climbed the twenty-six worn out steps. By the time he arrived at the first landing his knees were complaining with pain, and he was forced to stop and rest. After a few moments, he continued his slow ascent of the remaining steps. The old man then managed to shuffle down the dark corridor to the doorway of what must have been at one time a tidy modest apartment.

Not counting the past sixteen Monday evenings, the only other time he had stood at this doorway was more than sixty years ago when he was a mere 12 year old shy boy. Pausing at the open doorway and smiling at no one in particular, the old man reflected on the ironical coincidence and began to reminisce.

He met her at the Joy Theatre. She and her sister had gone to the Saturday matinee and were sitting behind the boy when they started to tease him by flipping pieces of popcorn at the back of his head. He just sat there and watched the movie, too shy to respond. They must have sensed his shyness and inexperience; otherwise they never would have been so brazen. After the movie, as they were exiting the lobby, she apologized and said her name was Gloria. The boy wanted to say that it was ok, but he just grinned back at her and remained silent. His wide eyes were fixed on her young, but fully developed breasts, which seemed to be struggling to burst out of her powder blue cashmere sweater. His body twitched with adolescent desire.

The girls giggled and began skipping home, a new two-storey apartment building at the corner of First and Cummings, just a block away from the theatre. The boy followed them. When the girls got to the entrance of the apartment building, still giggling, they gestured for him to follow them upstairs. The boy reached the top of the staircase by leaping over several steps at a time. As he reached the hallway he heard a voice sweetly call out, “over here”. He turned with eager anticipation, and quickly walked, almost ran, towards the voice. Just as he got to the end of the hallway a door slammed on his face and he could hear the giggling of the two teenage girls. Choking with embarrassment and anger the young boy quickly turned around, ran back through the hallway, stumbled down the stairs, and flew out of the building. It wasn’t too long after that fateful Saturday that he and his family moved from Boyle Heights.

Several years would have to pass before those long-ago sounds of derisive laughter receded and faded, rarely to be recalled, and then only as a Proustian memory. Much living would take place and many world events would punctuate his life before he returned to that two-storey building. High school, college, law school, marriage, children, grandchildren, death of loved ones, love affairs, betrayals, cities obliterated by nuclear explosions, wars and war moratoriums, television, presidential assassinations, lunar landing, civil disobedience, labor unrest, farm worker boycotts, environmental pollution, school walkouts.

The slamming of that door wasn’t necessarily a turning point, yet it became a metaphoric incident that would influence him all of his life. So, instead of fleeing from barriers, he gradually transformed himself from a shy bookish young boy into an articulate kicker of doors.

He would become involved in social causes requiring him to confront established authority. There were some successes, but mostly failures. Yet, he continued to fight. He was always searching for new causes, until one day he realized that he had grown old and the cloak of relevance had been snatched away by a new generation of social activists. He was now, not only old, but also marginalized.

The old man’s withdrawal into that oblivion called retirement started with the mandatory golf games and the obligatory lunches with old cronies. Invitations to school reunions never ceased. But each of these activities left him with a sense of futility. He continued to feel irrelevant.

Then one day the old man came across a copy of “The Stranger”. Camus’ first line, Mother died today, almost sucked the air out of his lungs. He was unable to explain why such a simple sentence should have such visceral power. Nor could he explain why the novel’s language made such an impact on his soul. However, he did realize how much he had sacrificed, and a new thirst for meaningful artistic discourse began to develop deep within the core of his being.

He gradually began to reinvent himself. Perhaps a better way to say it is that he began to revert to his first true passion. After all, his hidden desire had always been the serious reading of literature and philosophy. But somehow the deeply imbedded anger of that almost forgotten Saturday had constantly steered him away from a life of reflective scholarship and into a career of social activism.

The old man continued his transformation by immersing himself in Twentieth Century fiction. Perchance, it was Somerset Maughn’s portrayal of a successful banker who abandons everything for his art in the “Moon and Six Pence”, or maybe it was Dylan Thomas’ poem “Do Not Go Gentle Into That Good Night”, whatever the reason, the old man’s creative spirit that for so many years had been buried somewhere in his soul, began to stir, and the idea of writing his own story started taking shape in his heart.

He was not, nor did he ever consider himself, a writer of fiction. But, he was willing to learn a new skill. After a few casual and fruitless attempts at story telling he decided to join a workshop for creative writers. He had nothing to lose except his ego, and at his age there was very little need of ego. 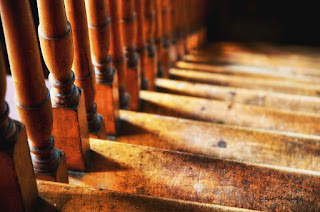 Thus, each Monday evening, he has been climbing those twenty-six steps and entering the rooms from which he was so long ago barred. He finally was rewarded with the fulfilled promise of pleasure; perhaps not the anticipated pleasure of an adolescent, but the more lasting pleasure that accompanies a two-hour feast of writing and discourse.

And so, the old man has promised the shy boy of long ago, that they will “not go gentle into that good night”, but together they will, in Dylan Thomas’ powerful poetic words, “Rage, rage, against the dying of the light.”
Boyle Heights Fiction Stories October 2012 Volume 3