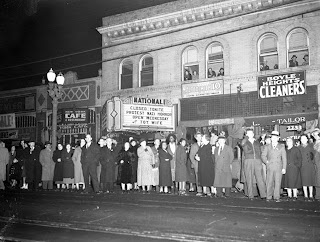 Canter Brother's Delicatessen along with the Breed Street Shul, were the social centers of the local residents. Eventually, if you lived in Boyle Heights, you would visit Canter Brothers. The display case was on the left side of the delicatessen, and small tables for four were on the right side of the room. A wooden partition separated the tables from the display case area. Two booths were located at the far end of the room, just beyond the tables.
As Tony opened the door, a loud chorus of voices reached his ears. His eyes scanned the warm room, and as he entered the aroma of sautéed onions and baked bread reminded him of his hunger. He noticed that all of the customers were men; the only female was the cashier.
Tony walked over to the cashier and said, "I'm looking for Howard Pensick." The cashier stared at this stranger, and then pointed to a man sitting in one of the booths. In the booth sat a middle-aged man dressed in a dark suit, white shirt, and black tie. The little hair that was not covered by the yarmulke had a tinge of silver. On the table in front of him was a shiny brown cup of black coffee, a book, and several newspapers.
Howard Pensick was reading a copy of the morning edition of the Daily News, when out of the corner of his eye he saw the cashier talking to a stranger and pointing in his direction. He noticed that the stranger was well dressed, but he needed a shave and his jet-black hair needed to be cut. Tony maneuvered his way through the tables, his steps were measured and deliberate; his erect posture announced self-confidence. Howard watched the stranger and correctly surmised that his deliberate walk was giving the stranger an opportunity to assess everything and everyone in the room. By the time Tony reached the table Howard's curiosity had been piqued.
"Are you Mr. Pensick?"
Howard continued to assess Tony's appearance, and noticed how his eyes matched the dark color of his black hair, and the hue of his skin was a light-brown Mediterranean amber. He detected a slim but powerful body.
"Who wants to know?" asked Howard.
"My name is Antonio Varela. Sam Lee said you're looking for a night watchman."
Howard thought for a moment, and then recalled that Sam Lee was the Chinese waiter at the San Kwo Low and had said something about his brother's friend who was looking for a job. But Howard was not expecting a Mexican.
"Sit down," said Howard as he cleared the table and pointed to a chair.
"Do you have any experience?"
"Some."
"As a night watchman?"
"Not exactly. But what does it take to watch over a furniture store?"
"Do you have any references?"
"I just got into town."
"Where from?"
"Arizona."
"What kind of work did you do there?"
"A little of this and a little of that," replied Tony.
Howard thought that Tony was too evasive and decided not to hire him. But he was intrigued by his demeanor, and wanted to know more about this stranger. So he continued to probe.
"Have you ever been in trouble with the police?"
"No."
"What brought you to Los Angeles? Looking for a chance to become a famous movie star?"
Tony detected a touch of cynicism.
"I don't think so," grinned Tony.
Just as Howard was going to tell him that he could not hire him, Tony pointed to the book on the table and asked, "What are you reading?"
Howard picked up the book and said, "It's one of the oldest and greatest books of Western literature."
"Oh yeah, which one, the Bible?" asked Tony.
"No, it's the Iliad. Have you ever read it?"
"Once," was the terse reply. Then he added, "I only read the Latin translation. The Greek was too tough."
Howard stared at Tony in disbelief. He never had met anyone who had read any of the classics. A few claimed that they had read the Iliad, but usually they had only read a condensed summarized English translation. In fact, the only complete version that Howard had read was an English translation.
"Is that right?" Howard's question was draped in sarcastic skepticism. He thought to himself how could this Mexican, who just came into the city from who knows where, be familiar with the works of Homer.
"I guess most of Socrates works are difficult to translate from the original Greek," said Howard.
"Socrates never wrote anything. It was Plato who did the writing."
"Are you saying that Plato wrote the Iliad?"
"I didn't say that. Listen Mr. Pensick, I'm sure that at least one of the many times you've cracked open that book you noticed that the title page has Homer as the author. Why are you asking questions, if you know the answers?" Howard detected irritation in Tony's voice.
Howard had one real passion and that was reading ancient Western literature. Suddenly, sitting in front of him was someone sufficiently intelligent who might be able to discuss the classics. Moreover, he was asking Howard for a job. Howard was finding it difficult to suppress his pleasure.
"I'm sorry. Let's start all over. Why does someone with your education want to be a night watchman?" said Howard.
"Because I need a job."
"You said you came from Arizona, but why did you come to Los Angeles?"
"To begin a new life," responded Tony.
Howard remained silent. Then quoting the Midrash he said, to no one in particular,     "All beginnings are hard."
Howard was beginning to change his mind about this Mexican. Maybe he could use him as a night watchman.
"Well Antonio Varela let's order some breakfast and talk Greek literature."
"Call me Tony."
"Okay Tony. Breakfast is on me. What'll you have?"
"How about some ham and eggs?"
Howard smiled and said, "Canters is a kosher restaurant and doesn't serve ham."
"What's kosher?"