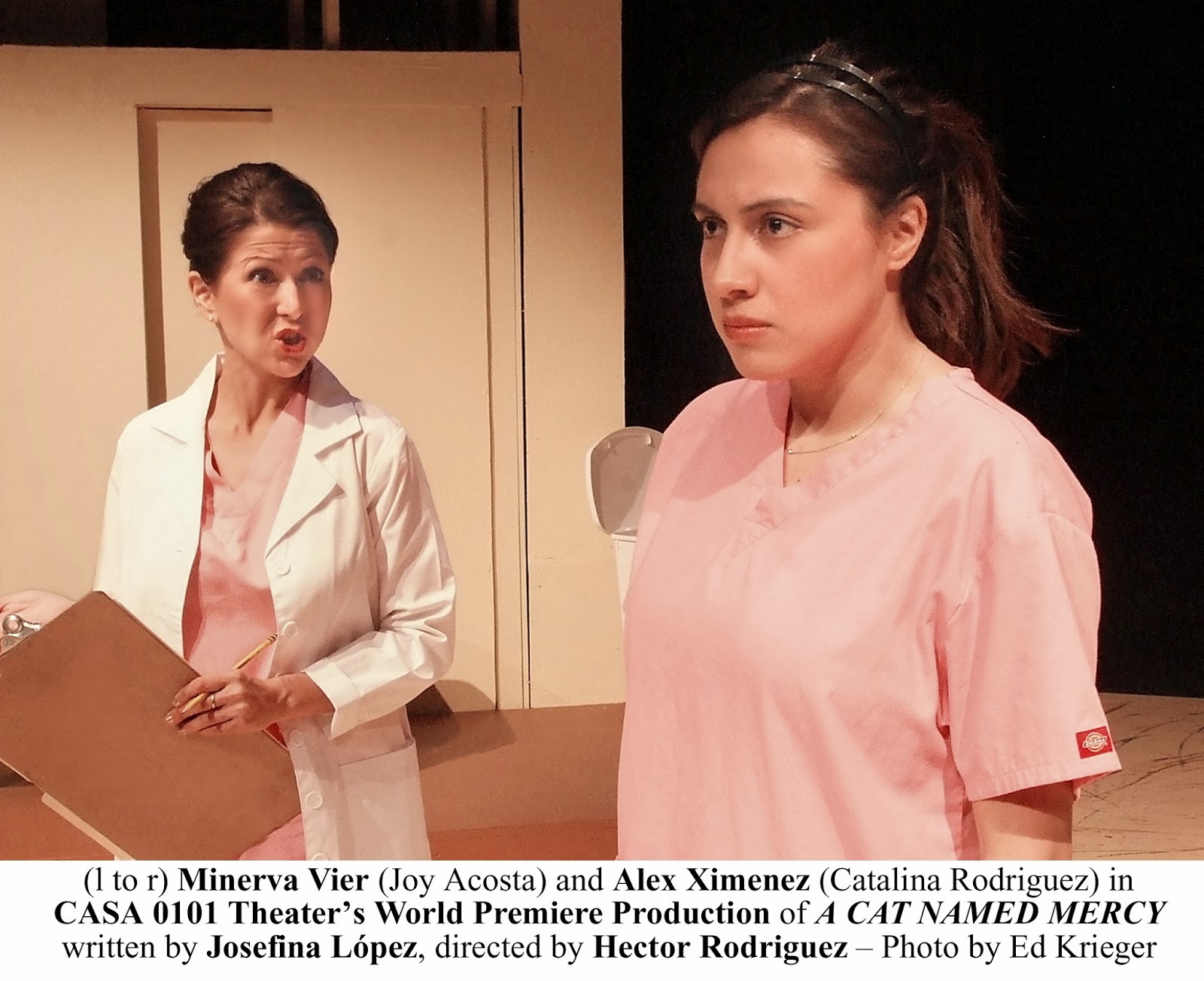 Recently staged at Casa 0101, A Cat Named Mercy is not always an easy production to watch. The play, a newly penned drama by Josefina López, written in her signature cine-teatro form, brings us to the brink, literally, of death and beyond. It is no small feat. Staged with aplomb and a veteran director’s subtle hand by Hector Rodriguez, the two-act show is laden with heavy, contemporary issues.

Elder care, immigration, undocumented and uninsured elders, the denial of health insurance to those with pre-existing conditions, assisted suicide, and sexual abuse in the home are all addressed with a keen sense of wit and theatricality, that zig zags through a maze of troubling, sometimes hard-to-stomach and always hard-hitting material.

In an ironic twist on the play’s title, López offers no quarter or mercy, but she is never so completely heavy-handed that it becomes unbearable. The drama unfolds with beauty and sadness, with bold truths and implacable hope. At the center of the story are Catalina Rodriguez, a cheerful sweetheart who works as a nurse’s aide in a convalescent home, and a mystical cat she comes to call Mercy.
Delivered with heartbreaking, uncanny realism by Alex Ximenez, Catalina’s optimism and genuinely good nature are severely tested as the production pushes forward, threatening to spiral out of control into melodrama or even, perhaps, farce. Fortunately, Rodríguez is able to reign in all those possibilities and turn them into strengths, culling performances from his actors that merit notice all around.

At once tender and soul-shattering, A Cat Named Mercy is López and Rodriguez at their best, working in the context of a collaboration that is at least a decade old. The nuanced rigor that informs their working partnership is evident, especially in the characterizations and fleshing out of the vividly memorable roles written into the script. More than a dark comedy about health care, it tell the truth about our times.

The fluid ensemble nature of the play is no surprise. Many among the troupe are also long-time López collaborators. Carmelita Maldonado, as such, is luminous in three very distinct roles. Newcomer Blanca Araceli as Catalina’s blind and increasingly ill, undocumented mother, has created a character that is absolutely riveting. The culturally diverse cast includes French-Filipina Minerva Mier, who first comes on as the hard-ass supervising nurse and later becomes Catalina’s biggest defender. In all, 14 actors play 33 roles. The lyrical score and sound design by Bill Reyes is seamless. And the fluid set by Marco De Leon allow the actors to move from a senior convalescent center to a small cramped apartment to a dispatcher’s booth, to childhood and the afterlife with ease.