Ana Castillo's GIVE IT TO ME 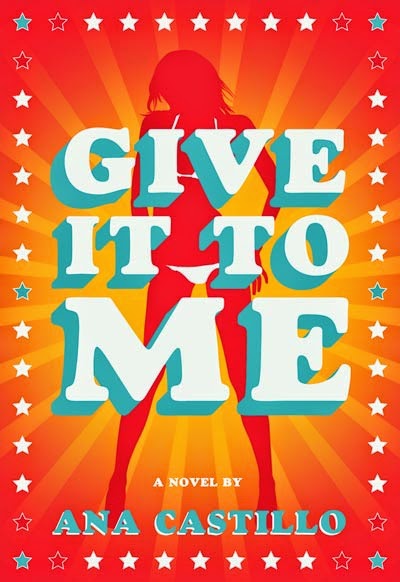 Palma Piedra, the stormy, conflicted, promiscuous heroine of Ana Castillo’s newest novel, is the kind of character you don’t want to admit you’ve fallen in love with. Give It to Me, the infinitely loaded title of the book is perhaps an over-simplication, because Palma is not simply oversexed. She merely enjoys being physical with others, and her appetites are expressed incessantly as a need for love and comfort for the most part but also as the very real ramifications of both an emotional and a physical hunger, a raw lust that can only be satiated with passion and lovemaking. The latter two are acted upon amply and in every manner of possible configurations, where traditional categories and orientations and preferences are gleefully thrown out the window.

Bluntly, Give It to Me, is a guilty pleasure, easily a one-sitting read because Castillo’s language, her dialogue, her caustic, always subtly sarcastic observational commentary as manifested in the mind of her lead character’s nearly omniscient sensibility are by no means muscular or truly literary in the traditional ways. It is, at its root, pure, rootless, and full of rooting fun, a fun-house ride through the life a woman already aware that she has attained a not so enviable cougar status but who retains a certain innocence and optimistic hope in spite of all the evidence to the contrary.

Palma, named for the California palm trees her mother might have seen in California, grows up in Chicago under the assumption that she has been abandoned by said mother and raised by a strict, almost sadistic grandmother. Enter a boy child who is presumed to be her cousin, a handsome, charming troublemaker who she herself abandons early on and with whom she later initiates a long distance affair upon his release from prison for unspecified crimes.

Castillo is far from a Margaret Atwood and much less a Sidonie-Gabrielle Colette, but it does seem as if the latter has had more than passing influence on the making of Castillo’s new novel. Palma Piedra expresses her femininity with a brazen, running, non-stop take-down of everything and everyone. From the “spider monkey” Mayan tree trimmer to the spoiled rich Jewish-Central American daughter of Brentwood or Beverly Hills privilege, not a single community, ethnicity, socio-economic class, artistic discipline or sexually-oriented identification is spared. Of course, the gamut is laden with stereotypical depictions of each, so there is never any danger of any real emotional or lasting connection with any single one of Castillo’s characters, including her itinerant protagonist.

Castillo is imbued with enough of an encyclopedic familiarity vis-a-vis cultural currents (both Chicano/Latino and otherwise), fusions, technological developments, social media and psycho-sexual babble from the last 30 years to make the roller coaster romp that is Palma Piedra’s life more than just the author’s masturbatory exercise. In the end, one finds that rooting, in the porrista, cheerleader-esque manner of speaking, for Palma is a worthy pursuit, even if it flies in the face of our most basic moral tenets. This is also one of the reasons Castillo’s is an important new work for an artist who has long been an outlier in the realm of letters and particularly among those whose work focuses on Chicano or Chicana literature.

If for that reason alone, beyond the sheer reading pleasure, Give It to Me can lay (pun intended) claim to a few hours of one’s albeit diminishing spare time, it would not be wasted effort. More than just an examination of issues around sex as subversive power which can be used to empower the colonized and disempower the those entitled by hegemonic systems historically at play on both socio-economic levels and in gender or sexual paradigms, Give It to Me—as perhaps an extension of Castillo’s own private personal experiences—is fascinating enough to be, if not imperative, at least not easily dismissed. The insider coding, Spanish-language word choice and the refusal to offer indirect translations, like so many others often do ala a Sandra Cisneros “I only speak Spanish in italics” mode, are for me, admirable and particularly enjoyable. Long live “la Rocky” Palma Piedra and may she get it as much or as long as she likes. A reader should revel in that wanton abandon no matter how guilty doing so might make him or her feel.