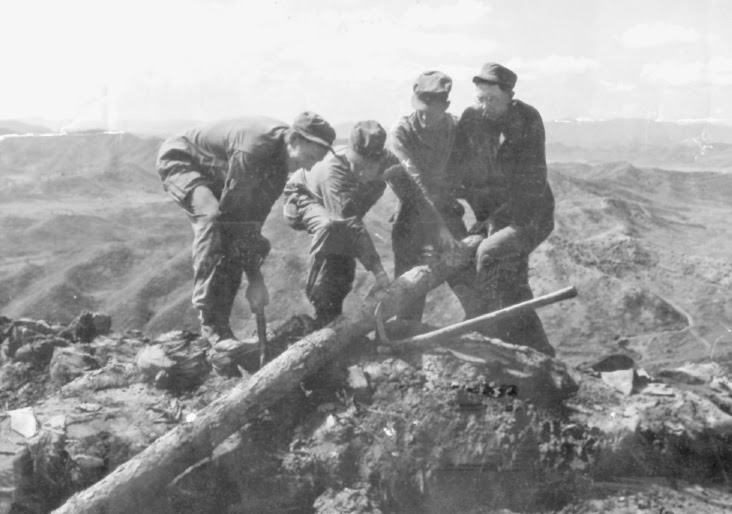 Every Veteran’s Day, I call my father. He’s 82 and comfortable with a cell phone. He raised a total of nine children, seven with my mom and two with his second wife. He is proud that all nine of his kids finished high school, that one is a doctor and another works in Washington, D.C. for the Labor Department. He is not proud when he talks about his military service as a member of the 7th Infantry Division in Korea. In fact, he has a hard time talking about it at all.

Like many Americans of Mexican descent, he enlisted. Full of the belief that he was going to defend his country, he hopped on a Greyhound from Houston to Killeen, Texas for basic training. He was so thin and slight in stature that he was only charged the children’s fare for his bus ticket. At Ft. Hood, he boxed in the lightweight class before shipping of to Seoul.

Fighting alongside Ethiopian and Colombian battalions who were there as part of a United Nations force, he was wounded during the months-long Battle of Pork Chop Hill again communist Chinese forces, decorated with a Purple Heart and honorably discharged. As a consequence, he nursed Post Traumatic Stress Disorder, PTSD, for most of his life, never seeking treatment while it lay seething and festering there in the wounds which would never be visible from the outside, the psychic damages that came from witnessing war firsthand.

On the morning of November 11th this year, he tells me I shouldn’t call him to wish him a happy Veteran’s Day. “You should wish me luck. You know I have heart surgery tomorrow,” he chides. Being the terrible son that I am, I haplessly apologize and ask him about the procedure. The heart stents he was fitted with many years ago have worn out and are to be replaced. The doctor will go in through an artery in his leg.

During high school, I co-captained the boys gymnastics team. We placed third at the state tournament, and as a result, I received a recruitment letter from the Naval Academy at Annapolis, which sought to fill the ranks of its own gymnastics squad. That fact that I was Latino, a good student and actively involved with service organizations on campus as a student leader were probably also part of the reason I’d been invited to apply. I remember both my parents sitting me down in the living room of our small, crowded home. My father’s face was solemn. Even then, he wanted me to know, that while the decision was mine to make, I shouldn’t feel compelled to serve in the military and that he had seen too many horrible things to congratulate me or wish me good luck before patting me on the back proudly and packing me off to the East Coast.

By that time I had already begun to identify as a counter-culture rebel and ultimately decided to stay at home for school at UT, a decision I have never once regretted. Perhaps my father recognized the fact that I had always struggled with authority and was happy to spend hours daydreaming or escaping in my collection of superhero comics.

My little brother, who had always had a much tougher time in school than most of us, got his high school diploma and then promptly joined the Air Force, which sent him to the Middle East during the first Desert Storm. In the air, a small heart murmur which had never been diagnosed was made much worse from the pressurization and the altitude.

This week, I call my father to check in on his recovery. He is irritated because he’s been told he can’t drive for a week. Once again, the subject comes up after I tell him the story of Eugene Obregón and how I’m putting the Medal of Honor winner on the front cover of my paper.

“Mi’jo, war is no good,” he says. “I wouldn’t want any of my children to go through it. Look at your younger brother. They got him classified as 100% disabled. When he got out [of the Air Force], he was only at 60%. No matter what happens you don’t come home the same.”