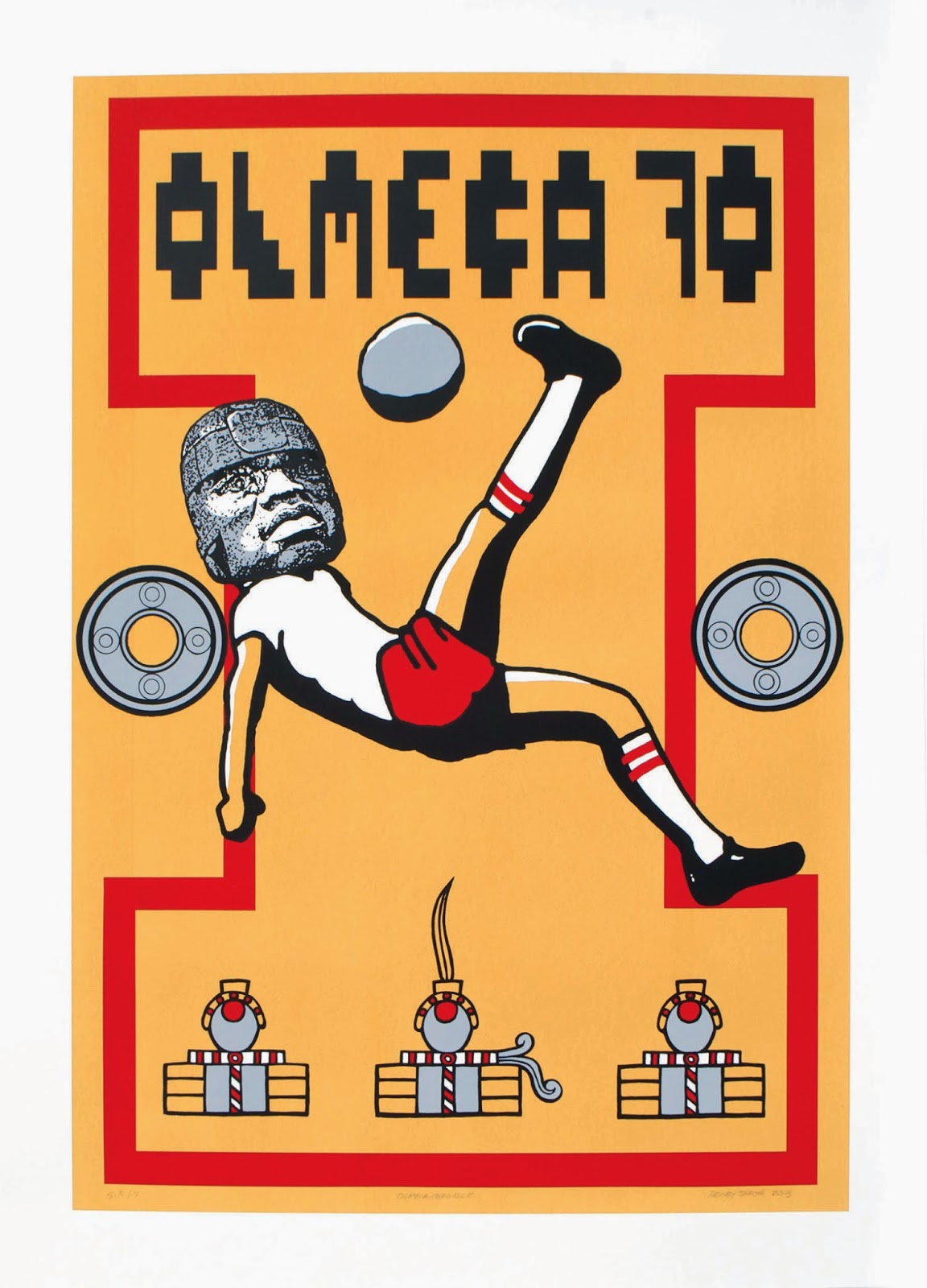 PL: Dewey how did you get into the Fútbol: The Beautiful Game show at LACMA?
DT: I guess from hanging out at Self-Help. Yvonne Gallardo was working with the curator of the LACMA show and he wanted to have prints. And he wanted to have prints that were created in L.A. So he invited Self-Help Graphics to create prints. So I had given Yvonne one of my Mexico ’68 prints and the curator said I want simple kinda prints, like that one. So my name came up.
PL: And did you dig the show?
DT: I’m not really into soccer that much but I appreciate all the art in the show. It’s badass. So they asked me and then I was like ‘Oh shit I have to think of something.’ My initial ideas were like these drawings of a skinny little kid in this shanty town with a big stadium in the background. And I showed them to Yvonne and she was like that’s cool but it’s not a Dewey print.
So I think I got kinda pissed off like what the hell is a Dewey print? So I’m like I have this other idea but I just thought it was too stupid. I was trying to be all serious. But that’s what came out; the Pele/Olmec head.
PL: And then I forgot that you do poetry. People can Youtube you reading at East Side Love for the “Where you from?” night.
DT: Before I did visual art I used to write poems. When I went to college I went as an English major.
PL: And how long have you been doing the Social Machine radio show?
DT: About a year.
PL: And do you two have similar tastes?
MBC: There’s definitely overlap. We don’t run our playlists by each other and there’ll be times where we play the same song. I feel like he’s got a much wider range of music than I do from like crazy punk to crazy country. And I wanted to also have like a talk show, political kind of show. I’m still haven’t figured out how to make it all work, what kind of show to have. How to have a message and a purpose other than sharing my music.
DT: I just wanna play music.
To hear Dewey and Becky on the radio inside your computer go to:
http://radiosombra.org/category/social-machine-broadcast/
To learn more about Hard N Da Paint go to http://www.hndp.la/
Follow social machine on the twitter and the instagram