Orange Is the New Musical Sells Out 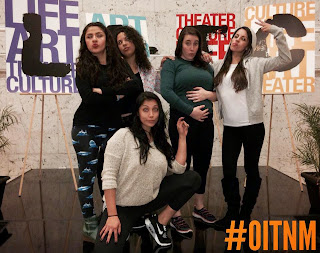 Now and again, a creative community comes together in response to an idea, a wild notion born almost collectively in the minds of young artists, performers, musicians, dancers and actors. Sometimes, the vision comes as a reaction to a cultural zeitgeist constructed around a popular media manifestation. Veronica Vásquez, a writer and filmmaker is amazed by the response her effort to simultaneously honor and spoof a hit television show has generated.

A long-time fan of the cult-favorite series Orange is the New Black, Vásquez, 28, could never have predicted the avalanche of support for her tongue-in-cheek tribute, an “unauthorized parody” of the show she has followed since its debut on Netflix as part of the network’s ground-breaking slate of original programming. As the writer and co-producer of a sold out, one-night-only experiment called Orange is the New Musical, she could not have imagined she would be ultimately responsible for the bottled lightning her imagination has wrought.

“It’s just really blown up it into something that I didn’t even think it would ever be when I first had the idea to do this. I thought it would be, at the most, maybe 10, 15 actors. Originally, my co-producer Bryan and I were going to direct it,” says Vásquez. “Then it just turned into this larger than life type thing. And we realized we needed to bring in professionals because it was becoming so great. And now we have a cast of 30.”

In partnership with Bryan Sandlin, an actor, writer and director she met while assistant directing on his independent feature film, Then End of Our Lives, Vásquez is at the helm of what is likely to become the underground hit stage production of the year.

“Bryan and I met on his film. He and I became instant friends. We collaborated on a bunch of stuff, and then when we were looking around for our next project, I said ‘How about Orange is the New Musical?’” Vazquez recounts. When she pitched him with several of the songs she was composing as part of her vision for a fanciful, edgy musical based on the Netflix show, she says, he was all in. “He said, ‘We have to do this.’”

At a downtown rehearsal on a stage inside the glamorous and historic Los Angeles Theatre Center on Spring Street between 5th and 6th, she is witness to the embodiment of a project that has become an emblem of possibility. A Highland Park native, Vasquez is the epitome of the new Los Angeles, a multi-cultural mosh pit where being Latina and the child of a well-known marketing expert who has specialized in and successfully mined the Hispanic market for major corporate clients, is merely one small facet of her identity. She cannot be faulted for the occasional need to pinch herself as it all unfolds.

A stage manager, a choreographer and a musical director add heft to a rainbow cast that is being directed on a squared-off numerical stage grid that allows the dancer-actor-singers on stage to hit their marks with precision and frees them up to learn the arm, leg, head and body movements that will best convey the spirit of the songs which comprise the bulk of the story. It is a story that, according to Vasquez, uses the same characters to “accentuate the ridiculousness of everything, to the point of it’s funny because it’s true.”

“We’ve been working together about seven years,” says Sandlin about his relationship with Vasquéz
“It’s very much a parody of what is happening in the show. We just go there. Our story line does diverge at a certain point because it is musical theater and we want it to be dramatic,” Vásquez adds.
The music, which features songs such as “Chocolate & Vanilla Swirl,” a sexually charged reference to an interracial lesbian liaison delivered by the Crazy Eyes character, and “Table for Two,” a hilariously exaggerated take on the Morello character’s obsession with marriage and her ex-boyfriends, are two direct examples of what Vásquez means.

“We’ve actually had a lot of the cast members from the show be interested in this show… which is crazy… liking all of our statuses on Twitter…  and be into the idea. There was a Netflix press conference recently, and the woman who plays Sofia and the woman who plays Gloria were like ‘yeah, our fans are amazing. They’re actually making a musical. It’s in Los Angeles on May 16th,’” Vásquez says. “It’s unbelievable that a group of people here in LA putting on a musical because we just need to is being talked about by people on a Netflix show. That doesn’t really happen in real life.”

Vásquez admits to having watched every episode of Orange is the New Black four times in preparation for the musical which she hopes will receive an extension or at least a new date at LATC. Bryan Sandlin, her creative partner, is equally thrilled by the unexpected overwhelmingly positive response. A winner of the “Highest Standard” award at the All Things Hollywood Film Festival for his independent feature—the film which brought him into contact with Vásquez—Sandlin made the move from Toledo, Ohio to LA because he knew his calling.

“I grew up in the theater, as an actor. I was in all my high school productions,” Sandlin confesses. Naturally, the Toledo, Ohio native made his way to LA. A role as producer becomes him. “This is my first time producing a musical so it’s very exciting. It’s bigger than we expected. We didn’t expect to sell out this fast. This is our first big collaboration together, and it’s been a lot of fun.”

Both Sandlin and Vásquez hope to announce an extension of Orange is the New Musical or at least a second date at LATC when the show opens on May 16th. “We’re hoping we can say it’s back by popular demand,” Vásquez admits. The social media buzz around the musical is unavoidable and portends a future for both Vásquez, the KefiStudio production arm she has formed with Sandlin and everyone involved the production.

“LATC does a lot of experimental theater from independent producers, [and] we are committed to supporting new Latino talent from our diverse communities,” says LATC founding director José Luís Valenzuela. “One of the goals is to introduce new audiences to The LATC, we welcome fresh talent and content that will expand the theater going experience for more Angelinos.”

Melinna Bobadilla, who takes the role of “Gloria” and Rocío López who plays “Aleida” are rare examples of Mexican-American actors portraying East Coast Puerto Rican or Caribbean characters, a switch since the history of Hollywood is chock full of boricuas or Cubanos standing in for Chicanos or Mexicans (J-Lo in Selena, Esai Morales in La Bamba, Tony Plana in every role he’s ever had, etc.). Both have the Loisaida swagger and attitude down. It’s a big-hoop earring body language that shouts a two-snap “Oh, no you you dit’-in!”

Bobadilla, who spent time in San Juan Bautista working with the famed Teatro Campesino and in the Bay Area while studying can’t say enough about how thrilled she is to be in the show. “Are you kidding me? It’s an amazing, awesome play. Everyone is great. You’re coming to see it right?” Bobadilla quips.

Sitting in the lobby of the Los Angeles Theater Center, Bobadilla and López rush through lunch and hurry to join the multi-cultural, multi-ethnic, cross-pollinated cast for a rehearsal in full swing. Dance moves, vocals and music explode across the stage. Vasquez and her team are hard at work.

“All of these people are here because they want to be. We don’t have any money. And we told everyone that during auditions. But we still managed to get all this incredible talent. And it’s just magic,” Vásquez says, her energy echoing the palpable joy hovering around the room.
#OITNW Kefi Studio Los Angeles Theatre Center