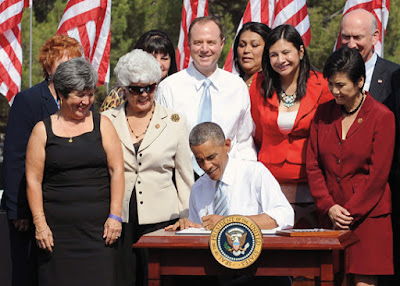 By George B. Sánchez Tello

For many Angelenos—African-American, Asian-American, Indian and Raza—inclusion was just a matter of time as to when various organizations and federal agencies would accept that we earned our place at the table where public land is discussed. The San Gabriel Mountains National Monument would not have garnered President Barack Obama’s attention had it not been for organizing among communities of color. His own words on the declaration day reflect this.

“The notion of a national monument is interesting because it reminds us that America belongs to all of us – not just some of us,” President Obama said. “My commitment to conservation isn’t about locking away our national treasures; it’s about working with communities to open up our glorious heritage to everybody—young and old, black, white, Latino, Asian, Native American—to make sure everybody can experience these incredible gifts.”

Soon after speaking these words, America’s first Black President signed the declaration, surrounded by a small crowd that included the first Chinese-American Congresswoman, veterans of the Chicano Rights Movement, the son of a Jewish civil rights attorney and an immigrant from Jalisco, Mexico. This gathering of communities was not merely the result of a local coalition, San Gabriel Mountains Forever, or the 11-year-old federal study of the region, which included dozens of public meetings.

The process unfolded in small ways across multiple decades: When a young immigrant father took his family on vacation in the San Gabriels; when an Asian-American community organized against a local English-only initiative; when an African-American Forest Ranger expressed concerned that more rangers in the Angeles National Forest needed to look like him; when communities began demanding recognition of indigenous history, culture and heritage.

The San Gabriel Mountains National Monument fundamentally alters America’s romantic notion that protected public land are isolated landscapes. Is public land alongside a major metropolis integral to our national landscape heritage? The answer, according to ecologists, historians, activists and residents as well as environmentalists, is resoundingly yes.

Yet more significant than recognition of the land, which birthed this culture we call Los Angeles, is the recognition of people and our experiences. The San Gabriel Mountains National Monument is a matter of belonging, or more importantly, recognition that we, as a community and society, cannot continue to exclude others.

In reassessing our view of the landscape, we have also altered our own relationships. Access to safe, green space and preserving our remaining wilderness is part of a comprehensive matrix of community well-being that improves mental, physical and spiritual health as well as civic engagement. And with a stronger people comes a stronger economy. We cannot afford to think of these elements as independent of one another.

Socially, these movements can no longer see themselves as separate. While traditional conservation organizations, like the Wilderness Society and the Sierra Club, were key allies, the San Gabriel Mountains National Monument would not exist without the support of local environmental justice organizations, education and immigrant-advocacy groups. This scenario will play out across the country in future public land campaigns as communities of color and urban populations continue to grow.

Struggle is the correct word to describe this movement for authentic inclusion, as our work has not come without opposition. When Mexican and Central American immigrants attended public hearings to support increased protection of the San Gabriels, their participation was dismissed by some. Foothill residents murmured among themselves that urban residents should have no say in the matter of the mountains. As President Obama declared the San Gabriel Mountains National Monument, a group of protesters amassed outside Frank G. Bonelli Park, where the declaration took place.

Upset with President Obama’s use of executive privilege to declare the San Gabriel Mountains National Monument, protesters allowed the event to reveal their attitude of exclusion—that urban communities and immigrants shouldn’t have a voice in protecting Los Angeles’ public lands. The protest escalated when supporters of the national monument arrived. Among the supporters, young women, in particular young women of color, were singled out by protesters. Attempting to dismiss their show of support, protesters demanded to know where the young women lived.

Precisely because many of us don’t live adjacent to the mountains, because we live in neighborhoods congested with automobiles, smog and environmental degradation, where healthy food is not a convenient option, we go to our wilderness, Los Angeles’ wilderness, the San Gabriel Mountains. The San Gabriel Mountains National Monument also alters the popular image of the people who protect our public land. And that is a story to celebrate.

George B. Sánchez-Tello teaches at California State University, Northridge and will contribute regularly on the environment and youth empowerment. His prose and fiction will also be proudly featured here.