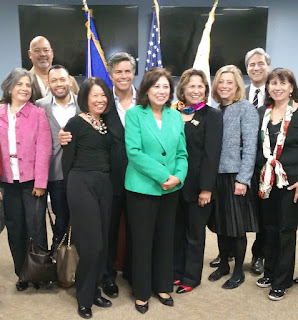 On November 10, the Los Angeles County Board of Supervisors voted unanimously to support increased diversity in both programming and management level staffing at LA County arts institutions. A motion by Supervisor Hilda L. Solis, will require the County Arts Commission to establish an advisory group of diverse arts leaders who will work with arts institutions to develop recommendations for ways to enhance the participation and leadership of individuals from underrepresented communities in the arts.

“As a global leader in the arts and perhaps the most diverse County in the nation, Los Angeles should be at the forefront of discussions and actions taken to improve cultural equity,” Supervisor Solis said. “Greater inclusion at all levels will strengthen our cultural institutions and help ensure maximum access to the arts for all, as well as future audiences and supporters for these important institutions.”

With the time allotted her during the public input portion of the agenda, Josefa Salinas, also a noted author and at-risk youth advocate, added her voice to the many backing the motion because it would benefit everyone, but “most of all, to those who live and work here… [because arts] inspire children to have greater vision.” Salinas ended her testimony by citing the late Dr. Maya Angelou: “…in diversity there is beauty and strength.”

“Los Angeles is the creative capital of the world and a melting pot of cultures,” said Supervisor Mark Ridley-Thomas, who co-authored the motion. “The arts organizations and programs in Los Angeles County should reflect this rich diversity in order to be sustainable and to reach a greater audience.”

Responding directly to the impassioned and moving public comments delivered by the assembled arts leadership just moments before the Board of Supervisors vote, he spoke at a press conference following the regular Tuesday Board session. “The arts have contributed to a long and meaningful set of narratives that comprise this region’s most significant asset. You have elevated the conversation.”

Ben Guillory, whose theater company is named for legendary African American actor Paul Robeson, spoke to the transformative power of the arts and how they have led him to a personal belief that: “Life is an art form. What we do, what we partner in, what we contribute,” continued Guillory, a veteran stage director and producer as well as performer. “If I had not been inspired by the arts, I don’t know what might have become of me.”

The Supervisors’ motion pointed out that one out of every seven jobs in the County is being generated from an arts-related field, according to the Otis Report on the Creative Economy. In light of the fact that Los Angeles County represents the 19th largest economy in the world, the role of the arts as part of a globally competitive economy becomes apparent. “When you have these kinds of gifts,” added Ridley-Thomas, “it’s something very, very special indeed.”

Rachel Moore, recently appointed president and CEO of the Los Angeles Music Center, admitted that her experience was gleaned primarily on the East coast. Nevertheless. she was prepared to expand the Music Center’s commitment to making arts programming, organizational leadership and staffing more reflective of the county’s overall population,

“I’ve served on boards in both Washington and New York. I also know how important it is that arts institutions look like the world [around them]. And believe me, LA has already been a leader,” said Moore, who performed as a dancer at American Ballet Theater long before becoming the dance company's top executive.

After 11 years at the helm of New York's internationally acclaimed performing arts powerhouse, her arrival in Los Angeles was greeted by great fanfare and expectation. By far the largest single recipient of the annual Los Angeles County budgetary outlay for the arts, the Music Center received approximately $24 million for operating expenses during the 2015 fiscal year. The Music Center operates the Walt Disney Concert Hall, the Dorothy Chandler Pavilion, Mark Taper Forum and Ahmanson Theater, as well as The Music Center Plaza and the newly opened Grand Park as part of its performing arts complex. It also serves as home to Center Theatre Group, LA Opera, LA Phil and Los Angeles Master Chorale, the four resident companies which lease space from the Music Center.

The motion, according to press materials from District 1 staff, directs the Arts Commission to establish a broad-based advisory task force, receive input from around the County, and identify philanthropic and nonprofit partners in moving forward with its Final Report, which is due in about nine months. The report is expected to offer specific proposals—based on community input, arts leadership and audience surveys, for example, that will lead to more diverse arts organization boards, staff, audiences, and programming at appropriate institutions and organizations.

LACMA’s Govan suggested that it was time to change the long held perception among entrenched, often defensive leaders in the arts, politics and academia, that diversity efforts are impositions mandated from outside by strong-arm, knee-jerk partisans of the politically correct set rather than a pragmatic path to sustainability.

“Diversity has often been seen as something to contend with” said Govan. He is among the arts leaders who know that developing long-term support for their institutions depends on their ability to convert audiences into sustaining members. Increasingly, those potential members will come from communities that have a broader range of cultural references. He looked forward, he said, to being part of a movement to help art leaders understand that a focus on diversity is ultimately beneficial to their respective institutions from a practical economic perspective as well as a programmatic one.

Film and TV star Esai Morales affirmed those sentiments. “It’s a hot button topic. But diversity, the word… it means to engage in the enfranchisement of people… and because it is all about business… to grow the market,” he said. The actor, who went from a role as a juvenile delinquent in a film called Bad Boys opposite Sean Penn to playing a Mexican-American U.S. President in HBO’s comedy series The Brink, took advantage of the opportunity to “accidentally” refer to District 2 Supervisor as “Mr. Ridley-Scott.” He was rewarded by a roomful of spontaneous laughter which erupted suddenly upon his dead-pan delivery of what seemed like an honest mistake that was quickly corrected.

Loosely quoting 19th Century dramatic arts instructor Francois Deslarte for emphasis on the arts beyond their economic value, Morales reminded those present that: “The high mission of any art is to crystallize the emotions and fix them in form.”

“The County is taking the lead in a significant conversation here,” said Laura Zucker, the Executive Director of the LA County Arts Commission, echoing Supervisor Ridley-Thomas. “This is a national conversation. That the Board of Supervisors wants recommendations that can move this conversation to action is a tremendous opportunity.”

“Children from every part of our community not only need access to a robust arts education, but also need a robust pipeline for entering these jobs. We hope that this report will provide recommendations to achieve this end,” Supervisor Solis said.