BOOK REVIEW: The Water of Life Remains in the Dead 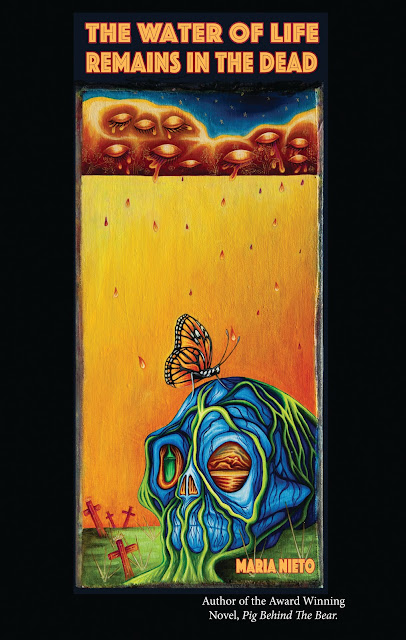 With her second Alejandra Marisol mystery, author Maria Nieto—a real life biologist who teaches in the Bay Area and, as such, has an understandably more informed appreciation for the forensic sciences—has reached into a reserve of deft humor and a lifetime of personal observation to generate a proto-Chicana super-sleuth that we can as proud of as we are entertained by. Meet Alejandra Marisol, the intrepid protagonist of Nieto’s first two outings as a mystery suspense writer.

A Los Angeles Times reporter with gumption, Nieto’s unlikely gumshoe tools around town in a powder blue Volkswagen Beetle named Azulita and is pulled into solving a series of grisly murders that seem connected to the case she helped the authorities break in a previous novel, The Pig Behind the Bear.  More than a sequel, however, The Water of Life Remains in the Dead is both allegory and a fast-pasted roller coaster ride through the underbelly of LA’s darker and less savory environs, even as it subtly explains how LA’s powerful political, economic and religious elite have long conspired to swindle, exclude, oppress and marginalize it’s large Mexican American population.

Outside of her dual life as a professor of natural science and a newly published fiction author, Nieto is the daughter of a strident Chicano activist and the step-daughter of a Mexican American LAPD officer who was one of the very first Latinos ever promoted to detective during the tumultuous 1970s. So she really does know where the bodies are buried and who those skeletons rattling around in the closet belong to. Because of it, her narrative, though written in the clipped, direct language of the modern L.A. noir novel, is loaded with tragic truths and the kind of unbelievable plot turns that would be far-fetched from anyone else.

As the nerdy science geek who spent her childhood in Highland Park navigating back and forth between disparate worlds, each as rife with danger as the next, Nieto is witty and imaginative. The puns and inside—occasionally bilingual—jokes fly fast and frequently. The history lessons come as natural aspects of Alejandra’s search for answers in a fictional mystery that unfolds in 1971.
Iconic LA settings such as Clifton’s in downtown, St. Basil’s Church on Wilshire and Belvedere Park in East LA are juxtaposed with the true circumstances of several still obscure (perhaps by design) historical events such as the peaceful Católicos Por la Raza protest at St. Basil’s that ended in police violence against pacifist demonstrators, church collusion with the displacement of Chavez Ravine residents in favor of land speculators as well as other oft-buried, uncomfortable nuggets are peppered throughout the story.

Of course, LA’s reputation as a city of glittering contradictions only serves to enhance the plausibility of the indelicate realities Alejandra Marisol’s journalistic investigations uncover each time another layer of truth is laid bare. With her savvy knack for connecting the dots and a fearless yearning to ensure the guilty are brought to justice, our heroine is aided and abetted by a cast of colorful characters that include “Gato,” in a return appearance as the black cat who exhibits eerily human behavior, Alejandra’s one-legged aunt Carmen, who isn’t  “going anywhere,” despite her cancer diagnosis and a number of lovable extended family members who are on Marisol’s side as she chases the scoop no matter where it might lead.

Filled with Fellini-esque humor and a plot that surprises with an unexpected ending,  The Water of Life is a quick read. The sophomore effort endears us even more to Alejandra Marisol. As an introduction to the irrepressible reporter, it makes us want to read the preceding novel. It also leaves us wanting more, because we have long needed a Chicana hero with moxie to root for.  The spunky, upstart LA Times reporter fits the bill. She seems ready-made for a television series or a movie of her own.

Too bad Hollywood and those elite powers that be still aren’t willing to let go of their own notoriously backward notions of what Mexicans and Mexican Americans can or should be allowed to do. A producer with real creative vision would do well to option these books as an episodic production. Said producer would also do well to consider hiring a director inclined to cast an actual Mexican American woman in the lead role. In the immortal words of Marvel’s Stan Lee, “Nuff said!”
Highland Park Los Angeles Times Maria Nieto Murder Mystery Pig Behind the Bear