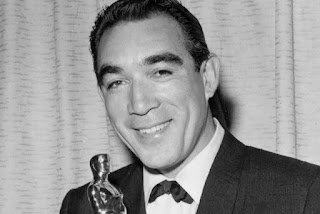 with a nod to two-time Oscar winner Anthony Quinn, who did not attend the 1952 Academy Awards to accept his Oscar and who won again for his portrayal of Paul Gaugin in 1956...

The Oscars broadcast audience share fell 6% this year, which makes it the lowest rated Oscars since 2008, according to the Los Angeles Times.

What was an apparent attempt during the telecast to address the lack of diversity and inclusion in the entertainment industry turned into an over-the-top display of multicultural miscues, borderline cultural insults and a missed opportunity to align the conversation with the most significant concerns of culturally diverse film audiences.

To begin with, Chris Rock got his locations mixed up. While he claimed to be doing his man on the street interviews in front of a theater in Compton, he was actually conducting them in Baldwin Hills at a former AMC Magic Johnson theater, a well-known movie viewing destination for the Black community.

Compton has no theaters.  And if the interviews had been conducted in Compton, the majority of those being interviewed would have been Latino, since Latinos make up over 60% of the population there.  When this community goes to the movies, they go to South Gate, Paramount or Downey, depending on the movie and whether its opening night, family night or a first date.

The Academy Awards broadcast demonstrated once again that Hollywood isn’t getting it.  There is a real problem, and it has to do with people feeling invisible and unheard in an industry the entire planet looks to for stories about life in today’s world.  They are tired of the same tactics of appeasement—like those demonstrated during the broadcast—where old stereotypes of minority anger are thrown back in the faces of the live audience while the world watches.  The idea, such a broadcast suggested, was to make Hollywood’s elect squirm for a few minutes as a misguided guilt-trip was laid on them for being party to the exclusionary practices of the movie business.

The Hollywood “problem” extends beyond the Oscars and the Academy, however. It is actually the result of a close-knit content creation factory that knows how to do things only one way and doesn’t care to open its production pipelines to include outsiders.  But just like climate change, there is real science behind why this is an unsustainable way of conducting business.  As tastes in movies and the kind of people who watch them continues to shift, a certain cognitive dissonance will eventually need to be addressed.

The fact is, Hollywood makes movies based on stories that knowingly ignore how demographic shifts are playing out in communities like Compton, Koreatown, Southeast Los Angeles and similar urban areas across the US. Hollywood and its elite seem to lack a frame of reference and, either because of arrogance or denial or both, demonstrate no interest in adjusting the aperture of the industry's proverbial lens enough to acquire one.

The industry solution is to mirror the politicians who have learned how to appease minority voters long enough to get through another election cycle.  They go to church, sit with the pastor and sing along with the choir. They attend local fiestas with buttons that read “Viva this” or “Viva that.”  They say “Happy New Year” in eight languages during Lunar New Year among a sea of Asian faces while they struggle to look happy and not out of place.

They make these token gestures to placate the “leadership” within the communities they understand they have to pay special attention to during election season, a leadership that they had a hand in developing through a system of political patronage. The Oscars broadcast was more of the same. But judging from the downward trend in viewership, this is not working anymore—and for good reason.

Every day there are more and more options available for those from minority communities to place themselves into the frame.  El Rey, Netflix, Amazon, HBO, Hulu and a host of other alternative sources for filmed entertainment are gaining audience share exponentially with original programming.  These alternative content incubators pose a real threat to the Hollywood system because they are open to telling stories that reflect the increasingly “brown” textures and tones of American artistic expression and cultural identity.

Programming available from these boutique platforms comes across as authentic and seamless.  Users are encouraged to customize and tailor their experience, selecting content which then provides the channels with enough feedback to suggest further programming options more closely related to an individual viewer’s personal tastes or interests. This is the antithesis of patronizing appeasement.

The leaner, upstart platforms are investing successfully in stories the world is hungry for. From episodic and feature-length dramas to animation, shorts and documentaries, content produced outside of the traditional studio and network parameters is resonating within the emerging demographic realities. These are marked by a growing audience base with money to spend on content in which they see themselves depicted as more than trite, played-out stereotypes.

Unsurprisingly, the Hollywood machine, continues to rely on a network of long-standing, self-appointed “advocacy groups” (too many to name here, but we are all quite familiar with them) that, for the past thirty years, have been led by those who have learned how to play the Hollywood game of appeasement. Regrettably, that dinosaur cadre of “advocates” and the media watchdog organizations they represent bear more than a passing resemblance to top-heavy social justice organizations whose leaders have, elsewhere, been unkindly and less euphemistically referred to as “poverty procurers.”

Three decades later, we are still having the same conversations about exclusion, lack of diversity and our MIA status at the table where green lights are bestowed. The only thing that has come out of it are the big donations from the Hollywood studios and entertainment companies that line the pockets of the advocacy organization executives they have created in their own image. These organizations help maintain the status quo while keeping hope alive that real change is just around the corner.

So the dinners with awards to artists of color are lavished at galas that uphold the power structures and the assiduously enforced pecking orders prevalent in Hollywood but which, ultimately, mean nothing and carry little weight within the actual industry.  And, as if that weren’t enough, the same Hollywood insiders who close the door on opportunities for artists and filmmakers from outsider communities dutifully attend those galas to accept awards and give speeches which reiterate how serious they are about change, recycling scripts from Christmas past approved by executives like CBS’s Leslie Moonves.

Meanwhile, Moonves is only too tickled to confess that he’s delighted uber-racist Donald Trump, an even bigger threat to the quality of life for non-white people in the U.S., is in the running because commercial air time sales for his networks (and for those of his competitors) have exploded as a result. Tragically, we don’t even realize that regular (unpaid) “news coverage” about Trump’s campaign outpaces that of his Republican opponents by more than a ten-to-one ratio directly because of it.

We’re too busy wondering why, despite the speeches we hear at that hotel on Wilshire Blvd., among the few dozen Latinos afforded access to the kingdom via the precarious drawbridge that retracts quicker than you can say “holy guacamole, Batman!” less than a handful are representative of the nation's largest Latino demographic. Mexicans and Mexican Americans comprise 66% of all Latinos in the U.S. Yet, when it comes to casting decisions, even in stories set in L.A., where they up half the city’s population, they are practically invisible. No need to mention the dearth of homegrown Latinos in above the line production jobs which lead to real advancement and important guild memberships.

It is the church with the choir.  The fiesta and Viva! button. The Lunar New Year greeting.  The glowing mirage that leads to the mainstream, an illusory path designed to circle ceaselessly around the destination it promises. A road that never gets to where it says it’s going. The altar at the end of the aisle where the mahogany-skinned ingénue and the handsome kid from East LA are left with their Hollywood dreams in tatters.

Of course, this scene, conveniently looped by the masters of illusion who really run the City of Light, is now the cue for the newest generation of artists and leaders to step up and take matters into their own hands.

They are already doing so. Long since bored and dissatisfied with the consolation, tacked-on two-dimensional gangbanger, maid, gardener or prostitute with a heart of gold stock character, they herald a changing of the guard that won’t be funded by the Hollywood establishment but will instead break through with vanguard artistic expression and social capital garnered along the streets of Compton, Boyle Heights and other places where 21st Century history is really being made.

Richard Vasquez writes from the intersection of marketing and community building, and occasionally contributes his two-cents on politics. He lives and runs in Highland Park with the members of the Highland Park Runners (Tuesdays, 7:15 pm, York & Ave. 50).  He can be reached at:  richard@vasquezassociates.com