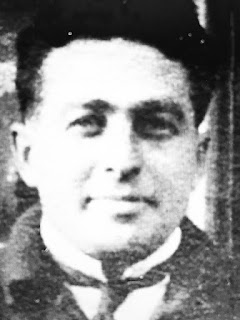 My father can hardly contain himself. Since we spotted the Boyle Heights exit, he’s been craning his neck, shifting in his seat, ordering me to turn this way, not that. He’s eighty-five, but reminds me more of my six year-old grandson at the sight of the Disneyland Matterhorn. Or myself at the Nordstrom’s off ramp. (Photo to left: Samuel Kantor)

The visit to Boyle Heights, an area once known for its ethnic diversity, is ostensibly professional for me. I am researching it for my third historical novel, set there in the 1920s. Among other things, my story relies on the premise that despite its melting pot status, strong divisions existed among the various working class groups, especially geographically, with neighborhoods intentionally segregated. But narrative considerations aren’t motivating my dad as we drive up the 5, and his reason for accompanying me certainly has nothing to do with fiction. Indeed, he grew up in the community and is simply excited to be going home. Where I’m hoping to get a sense of place, he’s planning a return to his youth. Where I’m hunting for artifacts, he’s seeking to confirm his memory.

Neither of us will get exactly what we want, of course, because so much of Boyle Heights has changed. As I follow his directions, down one road and up another, we both come to understand this. Time has marched on, we say, as if it’s a revelation. The schools he attended are still there, as is his home on Winter Street. But the Breed Street Shul where he learned Hebrew is barred up. The billboards are now in Spanish, and taquerias have replaced delicatessens. In other words, the Jewish part, the part that was culturally his, is gone. The world has turned, the land transferred from one people to another.

I see by his expression that the realization is bittersweet. The light in his eyes dims a little. But it doesn’t stop him. “Come on,” he says. “Onward to Brooklyn.” He means Cesar Chavez, the name that now identifies the avenue on which the shift has most obviously left its mark. Before we even get out of the car, Mexican spices scent the air. A fruit vendor on one corner competes with a mural of Jesus on the other. My dad recognizes the general outline, but the particulars are foreign. Where is the old bank? The tailor? The pickle stand? Wait, that used to be Wolf’s place, or, no, maybe it was over there.

We amble as he peers into the shops, attempting to rewind the years. He squints at the glittering sidewalk on which his feet both do and do not belong. Chavez, Brooklyn. A dual road, both familiar and strange, still the bustling, commercial center of town. I take in the sights with my novelist’s eyes, he through a rear-view mirror that is slightly askew. Each with our own gait, we search for our own gate, our particular opening to the quotidian past.

And we continue on that way until the last leg of the journey, when our quest suddenly becomes one. Now our heels click in sync. For now we are heading to 2325, the former location of his father’s shoe store. “A shoe box of a place,” my dad jokes, “but with quality products. Right next to Canter’s,” he says, as if the famous deli never moved to Fairfax.

We close in. This is the block. Our pace slows in unison. Our hearts skip the same beat:  Would the address be the same? Had renumbering been part of the shift? As we approach, my dad beams. For a moment, he is a little boy again.

Gazing west from Boyle Heights to the ever-changing downtown skyline, it is impossible not to feel some admiration for the technology that (hopefully) keeps those towering structures aloft. Up and up they go, like sprouting beanstalks reaching ever higher, competing for their place in the clouds. When I was young, the Egyptian inspired City Hall loomed large. A landmark as much as the Hollywood sign, it was the fixed point around which the city turned. Yet, even back then, the scale felt human. City Hall was tall, but manageable. You could see to the top without getting dizzy. There was a link between it and the environment.

Today, it is a dwarf among giants, a quaint reminder of a former era. It could be said that the American Dream is like City Hall.  A vestige of a time when upward mobility was attainable, when you could not only see to the top but reach it. At least in theory. Some understandably question whether the idea wasn’t always only aspirational, especially for people of color.  A dream indefinitely deferred, to paraphrase Langston Hughes. Still, the ethos of hard work, of it leading to a piece of that seemingly infinite pie, animated American society for a good portion of the twentieth century. Certainly in Boyle Heights where working class values included the belief in the possibility of a better life. 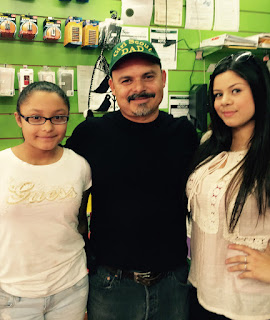 Today, however, that Dream appears dead, the victim of an increasingly inequitable country. Politicians claim they’ll revive it, but who believes them? Persistent racism, the shrinking of the middle class, and especially in areas like Boyle Heights, gentrification, has proven that hard work doesn’t guarantee anything, materially or otherwise. Upward mobility? Bah. The rungs have been cut out from under even the most conscientious among us. The Dream, along with Horatio Alger, who popularized it through his tales of “rags to riches,” is already collecting dust. (Right photo: Efrain and his two daughters)

2325. Yes, it’s there! We stop and gradually look up, almost believing that we’ll see our family name. But no, the sign reads Maria’s. Maria’s Shoes. We exchange glances. Could it be? We drift in. A forty-ish, handsome Hispanic man greets us warmly. He introduces himself as Efrain. He’s the owner, and the store is named for his wife. Cowboy boots, strapped heels and ballerina flats line the shelves. Mariachi music plays in the background. A teen-aged girl, his daughter, we learn, mans the register, just as my dad had done for his father decades before.

My dad tells Efrain his story. That his father Sam moved to Boyle Heights from New York with his two young children after the Depression. That his sister was ill and Los Angeles weather offered hope. That as Jews, they flocked there with other minorities for precisely the better life that the Dream promised. That they struggled, but that the business enabled Sam to take care of his family. That they ultimately   moved from a one-bedroom apartment to a three-bedroom home. That because of my grandfather’s sacrifices, my father went medical school and became a doctor.

Efrain listens and nods, his expression conveying that he can relate. He tells us that his family was from Mexico, that he’s owned the store for ten years and hopes to one day expand, although with prices the way they are…  He gazes at his daughter.

“She wants to be a singer. Beautiful voice. She performs at our church,” he says, showing us a poster of her upcoming program. My dad, I know, can relate, too, remembering his days at the synagogue, perhaps even the talent show he competed in with his now deceased best friend. I know he can relate because I can feel the goose bumps, the ones that travel from him to Efrain and back again. We all in fact know, know that this is an instance of chance and coincidence. There is no “rags to riches” hero, here, no wealthy benefactor that intervenes on anyone’s behalf. But across time, and within these very walls, we have been given a gift. We have witnessed a glimmer of the Dream.

We chat for a while longer, my dad about old times, Efrain about the present, his daughter about the future. We take photos with our smartphones. I jot notes that I’ll use in my novel. I write the word “continuity,” and then more cheekily, “walking in each other’s shoes.” We say our good-byes and hug, as if we’re long lost family. We will stay in touch with these people. We will see each other again. As we prepare to leave, I notice a pair of black leather pumps. They look vintage, a style from the 20s. It is almost too symmetrical, too ripe for metaphor. But they fit, so I buy them anyway.

Ona Russell has been published widely and is the author of three award-winning historical mysteries, including Rule of Capture, set in 1920s Boyle Heights. She holds a PhD in literature and lectures statewide on the topic of “literature and the law.” All photos (except for the vintage portrait of Sam Russell) by Ona Russell with a smart phone.