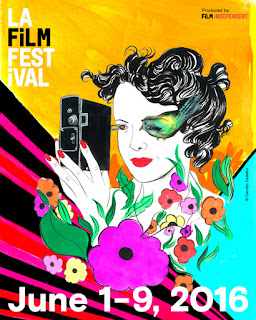 “In 2013 we launched a series of LA Film Festival posters designed to celebrate LA artists. Carolyn Castaño joins the ranks of acclaimed artists Ed Ruscha and the late Noah Davis as the 2016 poster artist,” said Mary Sweeney, Film Independent Board Chair. “Castaño’s work reflects and celebrates her deep roots and experiences in the powerful Latina culture of Los Angeles. Film Independent and the LA Film Festival support and celebrate the diversity of unique artistic voices.”

Castaño, whose mixed-media installation at San Diego’s New Americans Museum last year went on to show at the 56th International La Bienniale di Venezi. Her work in painting, drawing, video and mixed-media has been exhibited widely and was featured in LACMA’s Fútbol: The Beautiful Game, the Pasadena Museum of California Art and at the Museo de Arte Contemporaneo Rufino Tamayo in Mexico City. Her site-specific installation at the Los Angeles International Airport will be unveiled in June 2016. Castaño earned a BFA from the San Francisco Art Institute and her MFA from UCLA.

A 2013 Joan Mitchell Foundation grant recipient, a 2011 California Community Foundation Getty Fellow and recipient of the prestigious C.O.L.A. (City of Los Angeles) Individual Artist Fellowship in 2011. Her work was also featured in the Los Angeles County Museum of Art’s critically acclaimed Phantom Sightings: Art After the Chicano Movement, a groundbreaking “post-Chicano” exhibition that explored shifting and evolving identity politics as filters for aesthetic solutions to art in various media.

An extension of work exploring the role of female personas and feminine narratives associated with the narco wars and political dramas currently unfolding in Latin America, the mixed media installation which recently traveled to Venice is titled Mujeres Que Crean/Women Who Create. As a self-contained, one-woman exhibition, it included video, drawings, a site-specific curtain and site-specific collection of light-boxes depicting women created for the New Americans Museum.
The centerpiece of the exhibition is a video depicting survivors of Colombia’s armed-conflict re-enacting a number of well-known number of recognizable feminine poses and gestures in historical artworks.

With subjects juxtaposed with lush tropical landscapes, the video explores the role of women as mothers, sisters, and children of armed-conflicts, whose loss and survival is mirrored in that of the delicate ecologies surrounding the towns and villages from which they were once displaced as result of violence.

Set against the vibrant backdrop of East LA’s near-spiritual car culture, Lowriders follows the story of Danny, a graffiti artist who must choose between the world of custom tricked out ranflas pioneered by those like his old-school father and ex-con older brother, or the adrenaline-fueled, often outlaw spirit life that defines his own chosen form of creative self-expression.

“It is such an honor that the LA Film Festival has chosen Lowriders to open this year’s Festival,” said producer and Academy Award® winner Brian Grazer (A Beautiful Mind, 8 Mile, American Gangster). “From their humble beginnings to their modern-day status as works of extraordinary art, these aren’t simply cars… they hold the imagination of the people and culture that create them. Danny’s coming-of-age story is one of a son, a brother and a visionary, and we cannot wait to share Ricardo’s film with the world.”