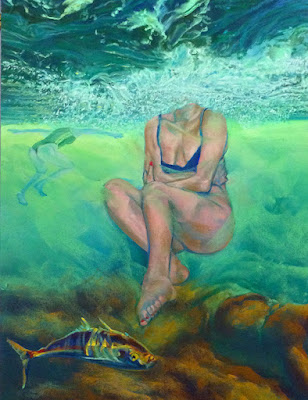 Pancho Lipschitz: I know you said you grew up in Boyle Heights but I didn’t know you worked at the Fine’s Market.
John Valadez: I always had a job. I lied and said I was 16 when I was 15. I was there about four and a half years. Every week I would buy an album.

PL: What was the first art that influenced you?
JV: I liked drawing, and I remember in grammar school when the Flintstones were the big rage. I spent one night looking at Fred Flintstone and trying to draw him as perfectly as I could. I took it to school to show my friends or people I wanted to be my friends and they said, ‘you didn’t draw that.’ So I was kind of hurt and I put it away. When I was in high school everyone liked Dali because it was weird but I always liked the Ashcan School; painting what the streets were like. I was always inspired by documentary photography, people like Diane Arbus and Lisette Model.

PL: So where were you seeing those works?
JV: Newsstands. Creative Camera Magazine. I would go to Hollywood off of Gower. That was golden. When I went to ELAC (East LA College) I was very fortunate to have Roberto Chavez. Chavez was the first Chicano art teacher; I realized if I keep going, I could get a job doing this. I didn’t have any aspirations other than to draw better and learn how to paint. A lot of my friends were much better at drawing. My friend Joey could draw anything. He’s the one that inspired me. But he never pursued it. The ones who struggle, we’re the ones that keep at it. If it comes too easy you want to do something else. Also I went to LACMA. I saw Warhol, Agnes Martin, Kienholz. I was like 17, 18. I went to the Film-X Film Festival. I saw the premiere of Eraserhead. Gronk was there.


PL: In the early days you were aggressively trying to make work that confronted the viewer.
JV: I didn’t do it on purpose. I just wanted to do my work. But I did have the attitude of “I dare you to buy this shit.” And a lot of them didn’t. Nobody bought it. The first show I had was in ’83. I didn’t sell anything at the opening. But they came back and bought it.

PL: What is the significance of the beach?
JV: The beach has always been fun. I used to body surf. I remember there was a certain point I would get out of summer school and my house was really close to the freeway. I would get on that one freeway ramp and people would pick you up. I had my towel and my flip flops and my little surfer Hawaiian shirt. They know where I’m going. (Above: Convertible Operas/Cinema Deudeuche ©John Valadez)

PL: How did you get to do the mural at the Victor Clothing building?
JV: I was doing murals for the city-wide mural project with Glenna Avila. I needed to get a mural job so I started at one point of Broadway, and I walked all the way up, hitting every store asking do they want a mural. Victor Clothing had a mural. It was kind of traditional with Columbus and the Aztecs. It was kind of cool though. I asked the guy would you like a mural because I see you have one there. Much to my shock and surprise he says “show me a drawing.” It changed my life. I showed him an elaborate pencil drawing and he said, “yeah.” I think I charged him a thousand a canvas. It took me about a year and a half.

PL: How did you start getting into pastels?
JV: I saw what Carlos (Almaraz) was doing, but he was much more of a pure painter. I always needed to take my time and make a story. Even to this day, I need drama.

PL: Does it bother you that so many of your murals have been covered up?
JV: We used to talk about it with Carlos especially; we’d go to lunch with some of the other muralists and we realized right away; they don’t last. It’s in the street and that’s the criticism. The young kids with the graffiti thing. But then the graffiti became the mural which I think is really, really cool. But we knew they were temporary because the building changes (owners), they don’t like what you’re doing, or there’s an earthquake and it literally crumbles, or people get tired of it, it fades and they need another one.

Like on Brooklyn and Soto, Frank Romero had this beautiful spray can art for years, it was there forever and then I asked Frank, because we got funding for a project, can I paint over your mural? He said, “Yeah, it’s old… it’s faded, go ahead.” So we did this whole thing using Roosevelt kids and then the earthquake came, and then Payless Shoe Store took over, and they wiped our mural out and the Streetscapers came and that’s what’s there now.

PL: How did you transition from doing strictly realism to what you do now?
JV: I didn’t want to be set in one thing. Even though the gallery would say ‘Just do those portraits’. I have this weird higher standard. I have to move on. People say ‘I like John’s work but it scares me. I don’t want it around.’ That’s a compliment. What you do is who you are. You’ve got to follow that guy. I really feel that there is two people, one that says ‘fuck ‘em all’ and the one that wants to be liked.

PL: You seem to enjoy defying the conventions of what a Chicano artist is supposed to be and what Chicano Art is supposed to be.
JV: I’ve heard that. That’s where I started from, but for me it’s just a platform for me to do what I want to do. Being an artist you have to have a little bit of narcissism. Maybe more than a little bit. I want to stand apart. I knew ASCO and I knew Los Four, but I always wanted to follow my particular vision and development.

When you’re not in a hurry, you ask yourself, ‘what am I doing?’ in terms of figure, setting and where does the character take you, not where you want them to go. It’s like being a writer. I want to make little cinematic moments. Like stills of a movie. Because we’re all trying to find transcendence. To make work you really want to transcend what your motive is and have a universal that people can see. That’s what really interests me.