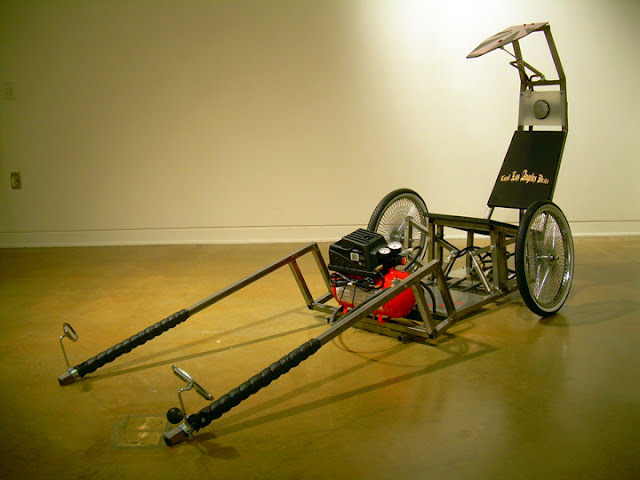 What happens when a Japanese American kid grows up in East L.A. in the ’70s? It sounds like the set-up for sit com on the El Rey network but it’s really the story of Clement Hanami’s life. We sat down for beers in Little Tokyo to talk about his journey from East L.A. to UCLA, coming home again to design the art for the East L.A. Civic Center Metro station and how he learned about the true meaning of art by being a roadie for Los Illegals.

PL: Did you always think of yourself as an artist?
CH: My father was a photographer and my mother was a seamstress but they both dabbled in artistic things. My dad was a poet on the weekends. He would do this thing called senryu. It’s like a haiku but haiku deals with nature and senryu deals with ironies in life. Like a Seinfeld episode. My mother used to paint. So I grew up in a house that was very creative.

Do you remember when you started to take art seriously?
Growing up Asian you’re always taught you have to get a job, you have to do good in your studies, stuff like that. So I did go to Don Bosco Technical Institute and I studied architecture. I had a hard time with a lot of the classes but I always did good in rendering. I could draw really well, but when it came to the math or any of the other subjects I didn’t do so well. I eventually got kicked out of Don Bosco and ended up at Garfield High School.

When I got to East L.A. College I realized that it was the art that I liked and not the architecture. That’s where I met Manuel Valdez who was the guitar player for Los Illegals. I became his roadie. I met Willie Herron who was the leader of the group. I started to understand that art was more than just drawing apples cut in half. That art could be something with meaning. When they did their performances they would have pictures of political prisoners and they would throw paint at it. They were using music and visual media in a different way. It really intrigued me.

What’s the difference between synthesizing different aesthetics and appropriating different aesthetics?
I don’t have a big problem with that. I grew up in East L.A. on First Street across from Maravilla amongst Latinos, and I was always classified as the “Chino.” I would be like, ‘What the heck. I think that means Chinese but I’m Japanese.’ And they’d be like okay Chino whatever. I had as many Latino friends as I did Asian friends. So in my situation I don’t have that fear of appropriation because I have that total immersion since childhood in Asian and Latino cultures. Not the big things but the regular things like eating tortillas heated over the fire with some butter by someone’s mom.

I think that’s what’s so cool about living in L.A. We have this environment where you can grow up with these cross-cultural experiences and you don’t even realize that you’re doing something different. I think that’s where the Lowrider Rickshaw comes from, when you start to observe the weird juxtapositions where in one situation it’s normal and then in another situation someone says no, you’re not allowed to do this, or you’re appropriating or you’re hi-jacking the culture. I think L.A. more and more is full of this type of experience, people just don’t embrace it or understand it or they’re afraid.

What was your experience at UCLA like?
When I got to UCLA it was a complete culture shock. At UCLA they didn’t care if you could draw an apple. What they wanted to know was “why are you drawing the apple?” Initially it was really a challenge but I was working with people like Alexis Smith and Paul McCarthy who tried to help me develop my ideas.

The culture wars were going on. The C.A.R.A. show was at UCLA. People were using Post Modernism and looking at weird juxtapositions. And there was nothing weirder than people of color in contemporary art. Like isn’t it weird to be talking about issue of race and ethnicity within a Western European context. Using some of the same methodology that Paul McCarthy uses in his work, but now it’s “yellow.” It was an interesting time.

What can you tell us about your Metro station commission.
I’m at the East L.A. Civic Center Station, right by Belvedere Park. I grew up right on the other side of the park so I have vivid memories of catching minnows in the lake and flying kites there. What I often do is take a stereotypical Western myth and deconstruct it through the lens of a Japanese American person of color. So the name of that piece is called Through the Looking Glass or Moving at the Speed of Light Rail.”

For me it was so weird that where I grew up in East L.A. was getting a metro station because as long as I lived there it was always seen as an area that was not worth anything. We’re unincorporated, we have to do everything ourselves. So this is really like Alice and Wonderland where people can jump in a rabbit hole and take off and visit places that they may not normally have exposure to.

I also was thinking of that Disneyland ride a long time ago called the Monsanto People Mover. There was this image of a big eye looking at you. Like you were supposed to be shrinking down. But I thought, Oh my god we’re being scrutinized. So if you go to the station there’s a big looking glass, but I turn it around so instead of being looked at, you’re looking out. It becomes a launching point for a whole new world of possibilities for people in this area.

There’s a quote from Jaime Escalante on the looking glass that says, “The greatest thing you have is your self-image. Don’t let anyone take that away from you.” So as people sit at the station hopefully they look up and they get this inspirational quote from a local educator about being proud of who you are.

We see a lot of this fear of the Other. People really want to build walls. Like what’s going on with Trump.  So the show is an experiment to see what is going to happen when all these cultures start mixing and blending. It’s really a discussion about the future of America.