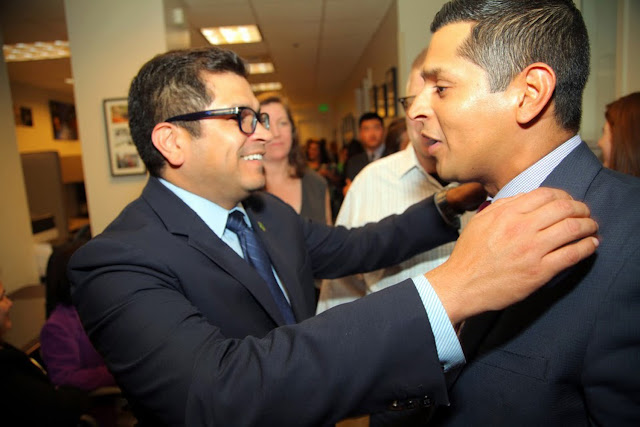 California Assemblymember Miguel Santiago certainly looks the part. Except for the subversive socks. Otherwise, it’s all there. The subtly patterned gray suit, the crisp white shirt unburdened by the tie he would be wearing for a more important meeting and the modest cuff links that seem more a personal flourish than a nod to GQ style all broadcast Sacramento insider daywear.

He’s taken a short break for an interview at a newish but non-descript and obviously independent eatery and coffee house on the ground floor of a renovated downtown LA building not far from his local headquarters as the incumbent Assembly District 53 representative, a state-wide office to which he was elected in 2014. But the multi-colored horizontally-striped socks are hard to ignore.

The unusual stockings, however, go unmentioned as the 42-year-old lawmaker discusses the trajectory that has taken him from a childhood on the fringes of LA’s San Fernando Valley to a formidable station as the Assembly’s Majority Whip, whose district includes downtown Los Angeles, Koreatown, Mid-Wilshire, Boyle Heights, Pico Union, MacArthur Park, Westlake, Little Tokyo and the cities of Huntington Park and Vernon.

“I grew up in Moorpark,” Santiago says. “Both of my parents were born in Mexico. So I had to translate letters and be the go between.”

Because they worked almost super-human hours to support him and his siblings, he recalls, he was motivated to study hard and look for part-time jobs to help alleviate at least some of their burden. His political awakening came during Governor Pete Wilson’s xenophobic crusade that led to Proposition 187.

“Growing up, I went to church, followed all the rules and got pretty good grades,” he explains. “My mom and dad worked so hard, and they never asked for much. They never complained.”

Seeing his neighbors, family members, all the hardworking, law-abiding people he knew as integral to his extended community get blamed for somehow taking advantage of the system and who therefore did not deserve—according to the shrill Wilson parrots, access to public education or services—was a shock, he says.

As a result, he understood that education was the key to building a better life for himself and his family. It would also honor the long hours for less than minimum wage his parents had worked tirelessly for years to keep him fed, clothed and sheltered.

“I attended community college and then applied at UCLA,” Santiago says. “I didn’t get accepted the first time but I applied again and got in.” Propositions 187 and 209, were twin, top-down legislative directives being vetted by professional “policy-pushers” that would limit access to public and post-secondary education to those who, in his words, “looked like me.”

As a student at UCLA, he became involved in efforts to oppose Proposition 209, which sought to dismantle affirmative action policies instituted to increase educational and economic opportunities for those who had been traditionally excluded by an uncodified and pervasive institutional tendency to maintain a status quo that was fundamentally averse to diversity.

“Because of Proposition 209, I decided to pursue public service,” he says. A role as a public servant, he understood, would allow him to influence the policies affecting those from constituent communities unaware of the extent to which their lives and the lives of their children were governed by policymakers. It is the responsibility of the public servant, he suggests, to let them know how much their lives and their children’s lives are circumscribed by policies created without any input from them at all.

When Warren T. Furutani resigned from the Los Angeles Community College District (LACCD) Board of Trustees in 2008, Santiago was appointed to fill the vacancy and earned the seat thereafter with a successful bid as an official candidate in 2009. “As an education advocate and a former community college student, I was really interested in doing all I could to make sure the proposed improvements across the nine LACCD campuses—and which were the basis for the original tax-payer funded bond package approved by voters in 2001—were actually carried out.”

Eventually tapped for a job as District Director in the office of Assembly Speaker John A. Perez, who had been elected to represent Assembly District 53. It should be noted that District 53 had previously be redrawn to include a significant and densely populated section of Assembly District 43, which Perez had previously been elected to represent had been redrawn to include a significant portion of Assembly District 46, previously represented by Pérez, Santiago simultaneously won reelection to the LACCD Board of Trustees in 2011 with overwhelming voter support as part of a slate that sought bond reform and an audit of the $5.7 billion dollar bond measure approved by voters in 2001 and again 2003.

With support from his colleagues on the Board, he pushed to get Measure J, a $3.5 billion bond, that would go specifically to the renovation and rebuilding of physical and architectural structures at all of the District’s nine colleges, onto a ballot which was then overwhelmingly approved by voters. In July of 2011, Santiago was unanimously chosen as President of the LACCD Board.

“It’s never easy to clean up a mess other people leave behind, especially when the people they were supposed to be working for have lost faith in the system. But we did it,” Santiago says. “If you drive by East LA College today you can see how far we’ve come.”

The ongoing construction there and at the other eight community college campuses might have been delayed even longer had Santiago not stepped up as Board President to call for bond reform measures and the creation of the first ever adhoc committee on bond reform.

Whether Vincent Price Art Museum Foundation Board Members such as Pete Galindo, Armando Durón and Consuelo Velasco-Montoya or the newly installed VPAM curator Pilar Thompkins know it or not, the state-of-the-art-facility on the East LA College campus they are now working to establish as an institution comparable to LACMA—or any other museum on the west side—is a result of Measure J and Santiago’s leadership on the LACCD Board of Trustees.

Succeeding his former mentor John Perez as the representative of the 53rd Assembly District, Santiago now lives downtown with his wife and his young son. Commuting weekly from LA to Sacramento, he has his hands full as an integral part of the proverbial posse led by Speaker Anthony Rendon, who represents the 63rd Assembly District.

“Speaker Rendon and I come from the same generation, and we share the same priorities and concerns,” Santiago offers. “Early childhood education, the environment, economic development and access to opportunities for all Californians. I’m excited because I feel like we finally have some traction to move forward with a progressive agenda and create a sustainable future that includes everyone.”

Santiago’s support staff—a pair of polite, patient and amiable boys—have begun tapping their watches and circling their index fingers in the air, doing their best to grab my attention and let me know that the Assemblyman really is on a tight schedule.

In light of their gesticulations, it becomes wise respond with a nod in their direction and let the Assemblyman’s reference to a “progressive agenda” linger in the air. With one word, Miguel Santiago has all but explained the socks. A good Catholic kid who came home at curfew, obeyed by all the rules and now plays with the big boys in Sacramento, he has, with the single modifier used to describe the Sacramento agenda, essentially said, “Yeah, so maybe I am a little clean-cut. Maybe I do look ten years younger than I really am. But just because I didn’t grow my hair long and protest with M.E.Ch.A doesn’t mean I’m not down to change the paradigm or challenge the entrenched status quo.”

The operative word here is “progressive.” More than a sartorial statement in protest of fashion and convention, Santiago’s singular selection of hosiery lets us know that behind the suit and the amenable smile that invites friendly compromise there lives a rebel through and through.

A mustachioed revolutionary or a barrio tough with the intimidating glare and even scarier (only to those that see Santiago as the model Mexican-American) tattoos he is not. But that doesn’t mean he won’t take your genteel and entitled, yacht club member, Eli Broad dinner guest posterior to the allegorical state capitol mat in less than 10-seconds flat with a figurative half-Nelson that will make you wince.

Maybe you’ll think twice about challenging his progressive bona fides or the long overdue, practical and legislative implementation of a political vision that puts people and the planet before profits. It’s only a matter of time before Miguel Santiago and his generation decide California is only a launch pad.
#AD53MarcoSantiago Majority Whip Progressive Agenda Sacramento Posse