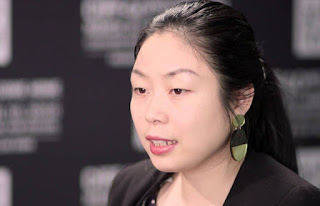 Hooligan Sparrow, a documentary by debut filmmaker Nanfu Wang, takes its name from a well-known Chinese feminist and human rights activist who first gained notoriety when she offered to take the place of women being exploited as sex workers and provide the same services free of charge. Unconventional and daring, it was her way of drawing attention on their plight in a country where women’s rights are ignored or, worse, systematically trampled upon. In the film, Wang trains her camera on nine women, among them Ye Haiyan—source of the film’s title—that band together to protest the sexual abuse of six grade-school aged girls by their principal in 2013. (Above: Filmmaker Nanfu Wang)

Wang joins them in China’s Hainan Province where she and her subjects are followed, intimidated and threatened with bodily harm by government authorities when they take to the streets to demand justice for the six young victims and a legal sanction of their abuser. Her film, shot clandestinely, illustrates how a single person, armed with truth and conviction, can defy an unjust bureaucratic apparatus on behalf of women denied basic human rights.

The filmmaker’s secrecy is her strategy. She shoots demonstrations, a behavior viewed as audacious and offensive by the government-instilled culture, with a camera hidden in her clothes and behind her eyeglasses. When asked what prompted her to make this film, Wang replies, “I wanted justice done. I had to find a way to help these girls.”

With the Tiananmen Square massacre of 1989 still lingering in the memory of many in China whose parents survived Mao Tse-tung’s brutal purge of opposition to his “cultural revolution,” Wang stood up against the country’s prevailing political culture to make the story of those nine activists available for audiences beyond the heavy-handed reach of censorship and persecution. The film is a testament to her personal courage in the face of constant surveillance and harassment by undercover government spies. Two of the nine protesters, according to Wang, have since been jailed, as in the case of Sparrow. The human rights attorney representing the school girls has been placed under house arrest. They are all considered enemies of the state.

Wang’s documentary has garnered laurels at film festivals throughout the world. Subtitled in English, it has been picked up for stateside distribution and will be released theatrically in major cities across the U.S. In Los Angeles, it opened for a one-week run at the Music Hall in Beverly Hills on July 29th. Prior to that, Lynda Weinman, founder of the educational and online skills acquisition site Lynda.com, hosted a reception for Wang at her home in Beverly Hills, where she asked her guests—a group including many prominent and influential Angelenos—to help spread the word about Wang’s heroic film.

Wang portrays the plight of average Chinese citizens in a country where institutions and public officials come before citizens. Some have compared modern China to a dictatorship that flaunts its contempt for human rights. A country of a billion people, its ruling party elites exercise repressive power over the majority while keeping international criticism at bay through sheer size, military power and economic might.

Within this environment, Wang’s documentary is neither hampered nor diminished by the simplicity of its production values or the limited filmmaking equipment and recording devices used guerrilla style to shed light on injustice.

In an era of advanced technology, it is admirable to see how an artist, with only the barest tools at her disposal, took it upon herself to play an active political role in a society that exercises undue control over the private lives of its populace. The result is a film that catalyzes discussion. Its humanitarian message is a public call to action. And its urgency is underscored by the physical and psychological trauma to which the filmmaker and the activists were subjected. Inferred is the film’s potential to inspire other guerrilla filmmakers to expose corruption at the highest levels in China and elsewhere.