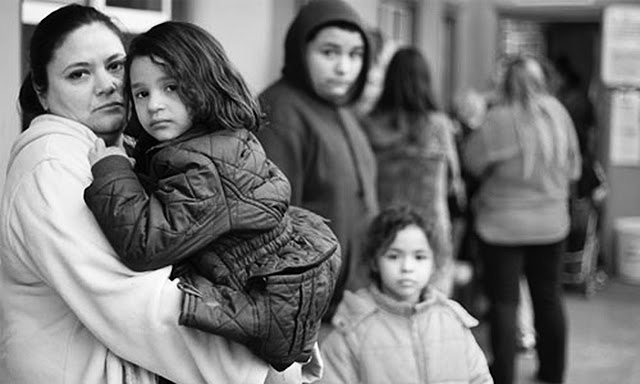 As we move into spring and summer, let us not forget that many individuals and families cannot afford to buy food or have a roof over their heads. We especially should not forget the children who are homeless. We, as a community, need to do more to address the problem of homelessness among young children, especially here in Los Angeles. According to the LA School Report, “estimates put LA Unified’s homeless student population at almost 16,000, which is more than the entire student population of about 900 of California’s 1,000-plus districts.”

Homeless children are attending our public schools and live within our communities—in an invisible manner. The PBS News Hour interviewed LAUSD student Nora Perez in this powerful segment over two years ago: overall, homeless rates continue to rise in Los Angeles and throughout the United States since millions of people never recuperated from the 2008 economic recession.

Former President Obama was asked about the homeless problem and to his credit, he gave a compassionate response. “Part of the change in attitudes that I want to see here in Washington and all across the country is a belief that it is not acceptable for children and families to be without a roof over their heads in a country as wealthy as ours,” the President said.

Instead of homelessness decreasing among children, it has increased tremendously. In 2014, The National Center on Family Homelessness conducted and shared a powerful report titled America’s Youngest Outcasts: A Report Card on Child Homelessness. According to the report, “based on a calculation using the most recent data from the U.S. Department of Education and the 2013 U.S. Census, 2.5 million children in America—one in every 30 children—go to sleep without a home of their own each year.”

The homeless are disproportionately black and brown with an increase among whites and Asian homeless. What is conveniently ignored is that the faces of the homeless are getting younger, especially in the Latino community. The National Center on Family Homelessness report also states “while progress has been made in reducing homelessness among veterans and chronically homeless individuals, no special attention has been directed toward homeless children, and their numbers have increased.”

Many Latino parents and students who end up homeless do not speak English, and sometimes they do not know where to seek aid. Additionally, some organizations that work on homeless issues do not know how to reach out to them. Many school districts and charter schools may not be aware of the chronic homelessness among students. For all children, homelessness is especially tragic. They worry about where they’re going to sleep at night. They worry about both their own safety and that of their families. They worry about what their classmates will say if they see them regularly wearing the same clothes. They worry about being able to stay awake in class since they were kept awake at the homeless shelter, motel, or slept a minimal amount of time due to the lack of space and/or the discomfort of sleeping in a crowded car.

These children often feel ashamed and keep their housing situation a secret from their teachers and school administrators. Many have difficulty concentrating on their academics and cannot do their homework under a bridge or in the cramped, smelly, cheap motel rooms where illicit activities are rampant. These students move from school district to school district several times a year, which makes it even harder for them to make the grade.

As taxpayers, we must demand that our government address the homeless problem. Instead of bailing out banks, automobile makers, and insurance companies, our government should help the homeless children and families throughout the country. Investing in these children would cost a mere fraction of what it cost to bail out corporate America. And we have a moral imperative to act. Insufficient funding to help homeless children must not be tolerated any longer. We have to pressure President Donald Trump to invest in helping homeless children. He promised and committed to “make America great again.”

Addressing the homeless problem head on would be one step toward making the country great. Let’s not pretend that homeless children do not exist. Next time we post photos of an extravagant meal on social media, let’s remember that these homeless children barely have enough food to eat and frequently go to sleep shivering due to lack of adequate shelter

Homeless children exist, and it would be a fallacy of near criminal proportions to simply look the other way, as if by ignoring these innocent young faces, we could will the problem away. Finally, it would be an unforgivable shame on our country’s leadership if it continues allowing this problem to grow.

Randy Jurado Ertll is author of the novel The Lives and Times of El Cipitio. Visit his website is www.randyjuradoertll.com. His article is reprinted here courtesy of www.lacomadre.org, where it first appeared.
America's shame Children of Homelessness Homeless children Homeless kids invisible Homelessness