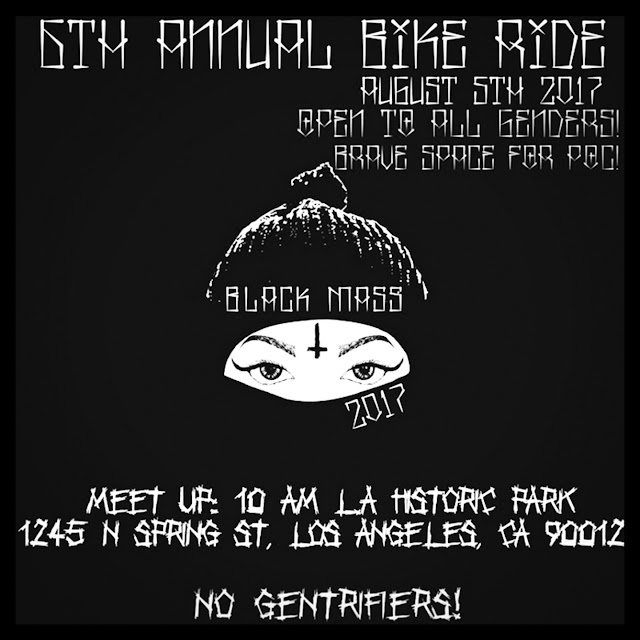 Founded in 2010, the Ovarian Psycos Bicycle Brigade was born from the understanding that our intergenerational traumas are not singular but rooted in the more than 528 years of systematic dehumanization that continues normalizing the violent erasure of black and  brown bodies everywhere. Our work was born from a very real need to affirm our existence, reclaim our agency, engaging collectively in efforts to propagate rage and rebellion.

Our approach, while raw in its urgency, was still no less reactionary and misguided in practice, inverting power dynamics in the spaces created, the rhetoric, and wordplay. It falsely equated feminism with gender specific genitalia and genitals with our politics while completely ignoring non-binary ancestral teachings of the past and the fact that all of our bodies have been historically—and to this day—targeted, the recent assault on street vendor Benjamin Ramirez being but one example. We found ourselves replicating the same hierarchical systems and structures when we should’ve been instead destroying it all.

With our analysis still in development and as we continue to reflect critically on our missteps, Ovarian Psycos Bicycle Brigade will continue only as our origin story. We have been for some time now been known as the OVAS—short for Overthrowing Vendidxs, Authority & the State AKA One Very Angry Squad. In this same spirit, we are eager to present our annual ride—formerly known as the Clitoral Mass ride and now to be called Black Mass. We have envisioned it as a dark, symbolic funeral procession that acknowledges the death tolls and mounting terror faced by communities everywhere under siege.

Black Mass will take the streets as a call to transform our collective sorrow and mourning into ungovernable fury. Leave your face and/or identity at home, like the brave and anonymous black bloc comrades. En mass, let us normalize the strength of our defiance, reaffirm our commitment to defend our ‘hoods, our people and the next seven generations because it is, put simply, our duty to do so.

The OVAS will gather for Black Mass LA on Saturday, August 5th, 2017 from 10 am to noon at the newly reopened Los Angeles Historical Park, 1245 N Spring St., Los Angeles, CA 90012. Riders will be greeted by a bike repair station, a photo booth and a bruxa crafts section where riders can create their own signs and hexes, or "hexizas." Riders can expect: an opening ceremony honoring the four directions as well as the four elements that give us life; a blessing of the bikes; a series of bike safety skits and yoga stretches.

Black Mass is a womyn of color-led direct action ride historically connecting settler invasion and occupation on native lands to the ongoing violent uprooting, displacement and exploitation of our working class communities and all aspects of this oppression from homelessness, police brutality, displacement, ICE raids, deportations, greedy crooked slumlords only motivated by profit, art-washing and  often subconscious white supremacism that has infected us all, clearly evident when we find ourselves aligning our politics and values with those of the oppressors. This year we call on our people, from the margins to the center, to step up in opposition and smash it together.

To all of you, we say CAELE! Mask up, wear black, bring the homies, your bike, your rage and, with love, come build with other collectives from LA and beyond. The need for our communities to hold femme-only spaces has been critical and vital to our collective growth. And today the urgency calls upon us ALL,  regardless of gender, to commit our labor, to cement our networks of solidarity so that we may continue the legacy of rebellion and resistance we have inherited. Follow BLACK MASS LA on social network sites for updates, route information and other important logistical information.