Cuento: To Bowl or Not to Bowl at Beverly Lanes 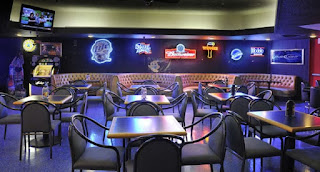 Having nothing else to do is the way a lot of shit begins. Some of it regrettable, unfortunately. But not everything. Sometimes it’s fun and memorable. Like the time we went to the Beverly Lanes for the first time. (It wasn’t everyone’s first time there.) That turned-out to be a fun trip. We would eventually learn that we didn’t even have to bowl.

We could just sit at the bar and drink cheap pitchers of beer. The bowling excuse had been kinda fun, I guess, but none of us were any good at bowling anyway. Plus, it cut into our drinking budgets. So we just ended up on the other side of the wall, watching whatever sport the barkeep had on.

But this new found knowledge wasn’t what made the trip memorable. What made it memorable was that the visit began with weed smoking in the parking lot. There’s no memory of whose weed it was or what method we used to light it up, but we did get high as soon as we got there. Right there in the car with shame obligating us to feel we had to keep it low. Because there’s nothing suspicious about four young men sitting in a car parked outside of a San Gabriel Valley bowling alley. Nothing whatsoever.

Then there was the discussion about whether anyone knew what time the bowling alley closed which started just as the bud was beginning to have an effect. The need to know was important because we had determined that if it was closing soon we might as well just go elsewhere.

This was before the wide-spread use of pocket-sized computers we all refer to as cell phones. Why is making and receiving phone calls still considered the most important function of our devices?! Anyway, whatever. Back then we couldn’t just look up the bowling alley hours online. It didn’t work that way yet. Someone had to get off the car to go find out.

Naturally we began asking each other which of us was willing to go ask someone what time they closed. Zero initial volunteers was where we started.

Eventually, Jimmy was the one who volunteered or was volunteered by committee. Either way, he went to ask the lady at the counter at what time they closed. We had decided that any posted signs couldn’t be trusted to be accurate and that an employee would be the most reliable source. So Jimmy went and asked the lady at the counter. He came back, relayed the closing hour, and we decided to hang out for a while. It was still early enough. Actually, it was just early. Period. The reason we thought it was late when we were in the parking lot was because we were high—the same reason we were all so thirsty when we walked in.

We wound up having a good time in spite of ourselves and would eventually return several times and do it all over again right down to assigning a volunteer emissary who would be charged with inquiring about the bowling alley hours of operation. The next time we found ourselves high in the Beverly Lanes parking lot, Jimmy didn’t want to go ask again, his logic being something along the lines of “I already went. It’s someone else’s turn.”

His reluctance would eventually give way, and he’d once again make his way dutifully into the place so he could ask the lady at the counter what time they were closing. He returned each time with the report, and we all got off of the car, making our way boisterously into the now familiar bowling alley.

The bartender and regulars were old school Chicanos and Chicanas. Pretty cool folks too. One time we ended up there on the wrong day and a big group of them were doing karaoke. It prevented us from watching a game that was on that night but we didn’t mind. They were entertaining enough as they took turns behind the mic.

On one of the subsequent trips Jimmy decided he wasn’t going to ask the lady at the counter what time they closed. He sat there like a stone and just didn’t go. We tried to convince him for a while but got bored soon enough and headed inside with Jimmy following right along.

As we walked through the door toward the counter, we suggested to Jimmy that it might be cool to ask her one more time for old times’ sake. Oddly enough, he agreed. We all stood there watching him as he sauntered up and said, “Excuse me Miss, but what time does this place close?”  Her loud and immediate response was pretty much like, “YOU ALWAYS COME IN HERE AND ASK ME THE SAME THING! I TOLD YOU ALREADY! WE CLOSE AT MIDNIGHT!”

Her face, twisted with frustration and anger, caused us to crack up with laughter spontaneously. And all that Jimmy could do was to thank her politely and walk away quickly before he started laughing as well. Regrouping, we all walked into the bar to have some beers and raise a toast to Jimmy, who had become what none of us, as his friends, would have ever thought possible,  the annoying patron at the Beverly Lanes. Cheers!
#eastla Art News Beverly Bowl City of Angels Creative Non-fiction Luis Reyes Montebello