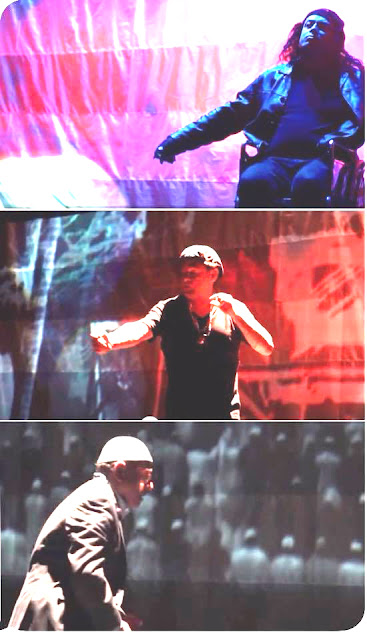 Once the capacity crowd has spilled out of the Tom Bradley Theater at the iconic Los Angeles Theatre Center (LATC), Richard Montoya joins them in the ornate, marble-floored lobby. The seasoned performer is—with Herbert Siguenza and Ric Salinas—a co-founder of Culture Clash, the renowned three-man comedy troupe the evening’s throng of patrons had come to see. With the faint residue of stage make-up still evident on his face, the veteran actor-writer-director is being unduly modest.

“Hey, man,” Montoya says, rolling his eyes slightly under raised eyebrows and flashing a sheepish, almost apologetic grin. “Guess you could tell we were working without a net up there.”

In the aftermath of the acclaimed trio’s second-ever, full-blown staging of Culture Clash: An American Odyssey, an original new production premiered at the “Encuentro de Las Américas: Embracing Our Voices” international theater festival, Montoya is fretting over kinks and glitches—perceptible to him alone—that previews, dress rehearsals and technical run-throughs are meant to iron out. (Pictured above to left, from top: Siguenza, Salinas and Montoya in Culture Clash: An American Odyssey. Photo credit: Ramón V. Parra)

Despite an abbreviated run on a stage shared alternately with rotating festival productions, zero lead time for previews or tech rehearsals, and Montoya’s unwarranted misgivings, however, the enthusiastic standing ovation which had greeted the “Clasheros” at curtain call only moments before was telling.

One of 14 plays being presented during the 17-day Latinx theater convening, the raw, politically barbed array of vignettes from the consistently relevant funnymen is—no surprise here—was an instant hit. Amidst a repertoire of impressive shows from some of the best theater companies in Latin America, An American Odyssey held its own and more.

The acclaimed sketch comics could have easily pieced together a “greatest hits” anthology culled from a 30-year trajectory. Fortunately for us, they forewent the surefire pastiche revival which—given the number of thespians from Cuba, Mexico, Puerto Rico, Colombia and Perú in the U.S. for the first time as festival guests—would have been entirely justified.

Developed specifically for the festival, Odyssey gains from solid direction by the legendary Robert Beltrán, who moves the trio in wide arcs across the stage but balances the blocking with intimate motion and exchanges that provide crucial spotlight moments their required focus. These are framed beautifully by Tanya Orellana’s set design, dominated by a giant gray-scaled American flag. The muted neutral  tones are an ideal receptor for the glowing parade of brigtly colored stills and video projections, designed by Yee Eun Nam and viscerally tied to subjects addressed on stage in each short act. Opening provocatively with the tragic and brutally truthful transgender, border-crosser named Julie (pronounced “yoo-lee”), the production unspools with a spirited and artfully modulated rhythm.

From Julie’s breakneck efforts to stay ahead of narco-thugs and U.S. Immigration officers to a halting conversation between two older gentlemen—one from Uganda and the other a Filipino—waiting be sworn in as newly minted U.S. citizens, the ride is classic Culture Clash.

Unrepentant and undocumented, Julie’s stark—perhaps transgressive to some—reality is pure and unblemished when she asks a pair of doltishly entitled, painfully naïve, "do-gooder" documentarians to let the “Latinx theater people in L.A.” know that “people are dying right now in the desert. Many people are going die in the desert tonight.”

A scene featuring a Cuban-American wannabe June Cleaver (Salinas) and her long-haired ex-surfer husband (Siguenza) as the unlikely couple who’ve cashed in on natural disaster and man-made ecological damage succeeds on too many levels to list. Even without the roofing tar viscosity of their latent yet somehow irrepressible chemistry—also no surprise after decades on the road together—the sketch rivals anything on network or cable TV today.

Muscular and agile, elegant and intelligent, Odyssey is, most of all, irrefutable proof that brilliant political and social satire cut neatly with cross-cultural hilarity, precise comic timing, and hyper-perceptive wit are the stock and trade of the nation’s premiere Latino comedy stalwarts. Montoya’s eerie, uncanny and rapier-edge ghosting of Arizona Sheriff Joe Arpaio alone is worth the admission. Lumbering tortuously along at the pace of refrigerated syrup—and possibly as a result—it is riveting in its dark morbidity. Montoya mimics Arpaio’s bloviating bravado and bluster almost too well.

True to form, Culture Clash ensures the roughly 90-minute journey is rampant with equal opportunity skewering. Everyone from Harvey Weinstein to Latins Anonymous, the defunct comedy collective held up as an example for them once, gets jabbed as a punchline. José Luís Valenzuela, co-founder and Artistic Director of LATC’s resident Latino Theater Company, under whose management and guidance the playhouse operates, is the subject of an entire monologue. The loving, ribald, and ultimately elegiac parody pokes tender fun at Valenzuela’s widely acknowledged status among teatristas as a “maestro emérito”.

Performed straight through with no intermission, Culture Clash: An American Odyssey is a fulcrum at the center of a historical crossroads. It marks the dawning of an age in which millennials and post-millennials of every color and ethnicity will assume a more forceful and direct role in defining what it means to be American.

It also foreshadows increasingly militant opposition to the callous greed, self-righteous entitlement, willful ignorance and hysterical intolerance represented by the new presidential administration and the coterie of bellowing dinosaurs in the U.S. Senate who approved a tax overhaul, a plan nearly criminal in its blatantly unjust and undemocratic attempt to concentrate wealth, privilege and political power in the hands of a few.

An “Encuentro” highlight, the assemblage of cutting-edge social commentary—and occasionally uncomfortable honesty—is gleefully delivered with a suppository-strength dose of purgative comedy. It speaks directly to a broader, multi-ethnic, polyglot dialogue on the role and responsibility of artists in general and Latinx theater artists in particular with respect to the social contract.

Envisioned as an updated take on the long dormant but passionately recalled annual TENAZ (Teatros Nacionales de Aztlan) Chicano theater conferences that grew out of a vibrant renaissance in Latino stagecraft during the ’80s and ’90s, the first “Encuentro” was held in 2014. Organized by a formal planning committee, this year’s “Encuentro” was convened against the backdrop of Pacific Standard Time: Latin America/Los Angeles (PST: LA/LA).

When examined through the prism of PST, both the “Encuentro” and An American Odyssey are augurs of an inevitable shift in how the city of Los Angeles and how its inhabitants see themselves in light of the competition for control of its—and therefor America’s—evolving soul. State Senator Kevin de León’s bid to unseat Diane Feinstein in D.C., the Antonio Villaraigosa campaign for governor, the strident anti-gentrification movements characterized by groups like Defend Boyle Heights, the Veteranas and Rucas Instagram archive of images from artist Guadalupe Rosales, the Barrio Dandy (John Carlos de Luna) “zoot suit style as political resistance” vintage recovery project, the demise of the LA Weekly are all, to a slight  degree, related indicators.

Few are willing to discuss these developments as symbolic signs, buts signs they are.  And they are connected. Siguenza, Salinas and Montoya see the connections, and understand them as neon writing on the wall. With Odyssey, they lob the utterances scrawled across those signs back at us from an echo chamber filtered with tongue-in-cheek irreverence and sorely needed levity.

Sacrificing sacred cows and prejudiced assumptions indiscriminately, Odyssey is no more profane or “unsafe”  a space than any of the Netflix, Showtime or HBO series depicting LGBT or minority characters many of the self-appointed Latinx compassion and empathy police all binge-watch when they’re not excoriating others and doling out symbolic beat downs justified as legitimate responses to class, gender identification or skin color entitlement.

Odyssey is at once a serious contribution to American theater and a treatise on the twisted cultural zeitgeist of our time in which paramilitary “patriots” on the Arizona border are free to moon and gush over movies like La Bamba and Coco one night then patrol the desert with automatic weapons, sniper rifles and night-vision binoculars trained on unarmed innocents the next.

It moves us to consider why the elite cultural arbiters from The New Yorker to the Beverly Hills bungalows—where the biggest Hollywood deals happen—are so reluctant to acknowledge Culture Clash as intellectual and creative equals to The Groundlings or SNL at their Second City or Manhattan best. If we can appreciate and fall in love with a film like Coco, an aesthetic marvel that dresses an admirable plea for tolerance and compassion in the vivid hues of an undeniably Mexican Día de Los Muertos tradition, enough to make it the commercial juggernaut it has become, shouldn’t we also determine or designate more of the stories and narratives that are green-lit or fast-tracked?

The familiar “We love you! We think you’re great! We get it!  But you know as well as we do that it has to play in Peoria. Sorry...” rote response at pitch meetings is tired and no longer tenable. Excuse me, Mr. Producer, but Coco, like, killed it in Peoria.

While we should absolutely support and congratulate Pixar’s Latino cultural consultants, Culture Clash and the other world-class theatrical ensembles that participated in the “Encuentro,” giving life to a dazzling kaleidoscope of voices and stories, deserve similar applause. They remind us to challenge outmoded polarities and false dichotomies which continue to fuel fear and hate. And they suggest it is equally imperative to confront benign or blithe dismissal, the endemic but no-less denigrating default regard for Latinos in the U.S.

When we finally—as Culture Clash has done—find the nerve to do exactly that, with our voices and visions amplified on stages and on screens and on museum walls we have both a right and an obligation to occupy, the odyssey we have all undertaken together as children of the Americas will be more rewarding for it.
Chicano Theater Culture Clash Encuentro de las Américas Herbert Siguenza HowlRound Latinx Lit Latinx Theater Commons RIc Salinas Richard Montoya