Review: 'Beauty and the Beast' is Perfect for Holiday Season 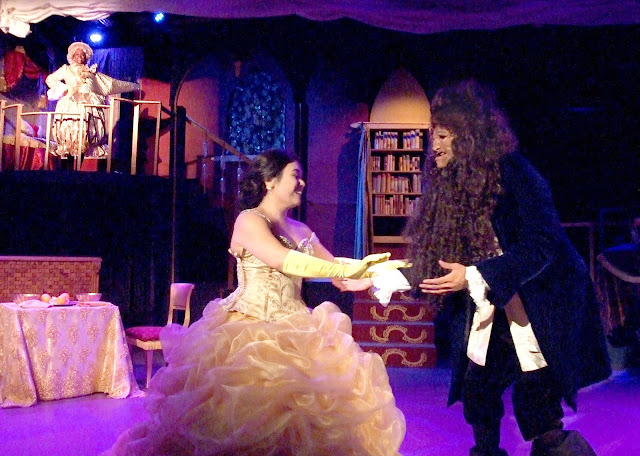 The Disney-Pixar animated blockbuster Coco has undoubtedly demonstrated that Hollywood can successfully deliver entertainment steeped in traditional Mexican culture. Banking on the widespread stateside popularity of the Día de los Muertos tradition—thanks, in large part, to a preceding generation of Chicano artists who came of age in the 1960s, added their own creative flourishes before generously 0 their take on the celebration with the rest of nation 40 years ago—the studios scored big with Coco. They scored so big, in fact, that taking the film world-wide was a given, and its record-setting reception in Mexico as the country’s highest grossing film of all time was not a surprise.

With a resplendent Boyle Heights reprisal of Disney’s Beauty and the Beast—the Broadway musical adaptation of the studio’s 1991 Academy Award-winning animated feature film—the Latinx producers and executives at the helm of Teatro Nuevos Horizontes Productions (TNHP), have just as handily proven that the magic works equally well when it moves in the opposite direction. Presented by TNHP in association with El Centro del Pueblo and Los Angeles Councilmember Gil Cedillo, the time-tested musical version of the classic fairy tale running through January 21st in Boyle Heights is a worthy follow-up to the spectacular and critically-acclaimed TNH produced run of Disney’s dual-language Aladdin last summer.

Committed to presenting musical theater that more accurately reflects L.A.’s rich ethnic and cultural diversity, TNH Productions breathes life into Beauty and the Beast with signature flair. The show—with music by Alan Menken, lyrics by Howard Ashman and Tim Rice and book by Linda Woolverton—premiered on Broadway in 1994 and in Los Angeles at the 2,000 seat Schubert Theatre in Century City during April of ’95. Although being staged at the considerably more modest 99-seat Casa 0101 Theater, TNHP’s current Beauty nonetheless offers an extravagant feast of heartwarming music, soaring choreography as well as show-stopping dance and vocal performances from several cast members.

Unfurled with unforgettable pageantry accompanied by sound, light and stagecraft wizardry TNH Productions introduced to L.A.’s East Side  audiences in 2012 (Lin-Manuel Miranda’s In the Heights). An upbeat modern incarnation of the original story, La Belle Et La Bête, by Gabrielle-Suzanne Barbot De Villeneuve, Beauty and the Beast is ultimately about love and its power to transform us, to make us better humans, or to restore our humanity when it has been taken or lost. Because of this, the play could not have been timed more perfectly. Both the message at its core and its potent cross-generational appeal make Beauty and the Beast perfect for the holiday season.

Directed by Rigo Tejeda and featuring mostly smooth musical direction by Caroline Benzon, the production features surprisingly graceful, if complex, choreography of Lia Metz. Representing a broad range of skin tones and distinct ethnic heritages, the play is comprised of 22 ensemble performers who sing and dance their way delightfully into our hearts while dressed in extraordinary costumes designed by Abel Alvarado.

Before following Belle from a “provincial” town where she feels stifled through a wolf-riddled forest to the castle where she agrees to replace her father as a captive of the intimidating and accursed Beast, we meet Gaston. Spunky and intelligent, Somera, as  “Belle,” combines a shimmering, almost operatic voice with a natural unmitigated charisma. Evenso, she is careful not to steal the spotlight. A muscle-bound and conceited suitor for Belle’s hand, Gaston derides her affinity for books and reading because it will make her less likely to land a husband of his stature. Played effectively to the hilt by Andreas Patazis—the narcissistic hunk is paired with LeFou (Maxwell Peters), an unctuous brown-noser whose loyalty to Gaston is regularly rewarded with slaps, pummels and body slams from his hero in a number of subtle slapstick comedy gags that epitomize the sheer physicality of the performances and testify to the choreographer’s skill.

Despite the limited space on stage, the scale of the production is not diminished or economized. The dance numbers—particularly the beer stein routine—featuring nearly the entire cast are tightly wrought without appearing to have been scaled-down. As the Beast, Omar Mata fuses the Cowardly Lion’s petulance with agonizing heartbreak and a terrifying countenance for a memorable performance that balances the cartoon-ish nature of the role with his own uniquely humble sincerity. This redeems the character as much the a final lifting of a curse which had turned him into a monster would have. The ensemble players and supporting actors are all equally gifted artists who each contribute in direct ways to the joyful, celebratory and redemptive nature of the tale.

Told in two acts, this glimmering manifestation of Beauty and the Beast is shared in a long-time community-based theater space which doubles as an art gallery and cultural center that also provides classes in play writing and acting. A production which is obviously much bigger than the theater where it is temporarily ensconced, the play resonates, bristles really, with the electricity generated when performers understand that they are playing to audiences filled primarily with residents from nearby neighborhoods and take pride in that fact.

Indeed, many of those flocking to Casa 0101 Theater each weekend to see Disney’s Beauty and the Beast as a live action musical production have probably never hear tell of either the Shubert Theatre or the Pantages Theater, much less know where they are. However, what imbues the production with such vibrancy here, beyond stand-out performances—Caleb Green as “Lumiere,” Rosa Navarrete as a sexy maid named “Babette,” and Jacquelin Schofield as “Mrs. Potts,”—is a firm belief among TNH producers and talent that being unfamiliar with the Schubert or Pantages does not mean you appreciate musical theater, high production values or stellar, non-traditional casting choices any less.