Roberto Gutiérrez: The Alchemy of Magical Brushstrokes and Metropolitan Landscapes

Artist and studio painter Roberto Gutiérrez isn’t pulling any punches these days. In fact, it wouldn’t be an overstatement to say the native son of L.A.’s Eastside is coming up aces more often than not. And when he isn’t walking away from his latest self-imposed challenge with a resounding victory, he’s holding his own with a combination of skill, panache and charisma that forces a split decision in his favor. And with the title belt all but his, he’s primed and ready to face off once more with a few of the most important metropolitan centers in the world.

Having taken them on one after another in an allegorical ring where the traditional ropes have been replaced by the outermost edges of a canvas stretcher or a sheet of artist’s paper, the plucky maestro has returned whole, unscathed and reinvigorated from his arresting and emotional encounters with Los Angeles, Paris, and, of late, New York. Increasingly revered as master of the urban landscape—rich and distinctly enunciated personal panoramas from “el mundo Gutierrezano”(the Gutierrezian world)—he remains an artist beyond the pale.

A recent solo exhibition at the edge of a small, unlikely lake in the Los Angeles Lincoln Heights district is the most emphatic affirmation yet of a simple, unspoken truth: Roberto Gutiérrez is the most important Chicano artist you’ve never heard of. And that isn’t his problem. It isn’t my problem. It’s yours.

In Roberto Gutiérrez: The Evolution of a Contemporary Artist—Magical Brushstrokes of Metropolitan Landscapes, the spry, paintbrush and graphite-wielding septuagenarian waltzes out of the hometown corner with welterweight grace. Reared in the somewhat hard-knock but still irrepressibly noble barrios of Los Angeles, he offers up, as an unblemished score card, the record of his date with the foremost metropolis in the nation. The unanimously riveting visual diary—worthy of a Madison Square Garden spectacle—brims with the streets, the pedestrian pathways, the built environments and the natural landscapes of Manhattan.

Deftly curated by Gabriel Jiménez at the Plaza de la Raza Boathouse Gallery in Lincoln Park, the selection of paintings and works on paper—inspired by the Eastside enclaves he came of age in, his twin pilgrimages to Paris, L.A.’s late Sixth Street Bridge, and, ultimately, even Gotham itself—bristle with big-city light and luster. They also echo and twist with the indelible love and loss that make borders, city limits and nation-state boundaries meaningless.

Rendered by the artist in acrylic on canvas, graphite on paper or with various ink, gouache, and tie-dye combinations, the factories, museums and office towers we recognize from a familiar Manhattan skyline hum and resonate as much with the humanity of the crowds passing through them daily as they do with historical or architectural significance. Executed over the last three years, the results of his affair with Hong Kong on the Hudson are a fitting finale to the three-part survey of a career that merits serious study and examination.

“Of course I was always Chicano, but before any of that, I was just another one of those [Mexican] street urchins,” Gutiérrez says. “As a kid, I used to walk downtown to shine shoes, and I thought I’d hit the big time when I could charge ten cents instead of a nickel.” If hunger and hardship at home shaped his childhood during the 1940s and ’50s in Chinatown, Boyle Heights and East L.A., combat in Vietnam as a U.S. Marine reinforced the futility of dreams and aspirations. Enlisting at 17, he was guaranteed “three squares a day” and found purpose in the regimen of military routine. That illusion evaporated, he confesses, during a mental breakdown leading to his discharge.

“When I got out of the military, I took a drawing class at East LA College, and realized I couldn’t draw,” he says. Turning to abstract art, he nonetheless favored, he recounts, the “Impressionists, Post-Impressionists and Fauvists” until he was confronted, berated and cajoled by legendary Self Help Graphics founder Sister Karen Boccalero. “She insisted I make figurative work,” Gutiérrez recalls. “And she encouraged me to come home in my art.” 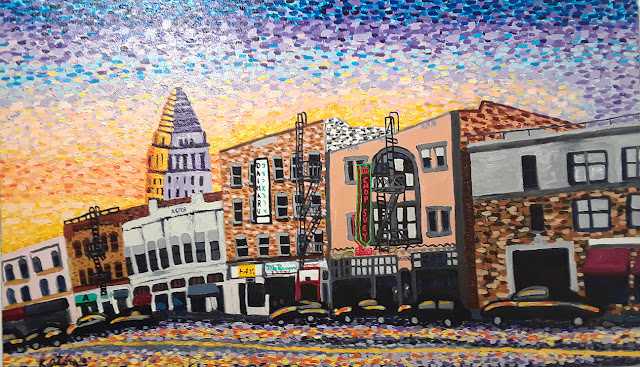 Opened in December, Metropolitan Landscapes was scheduled to close in January but extended to accommodate more gallery traffic than usual. According to Brenda Herrera, principal at a PR firm representing him, Gutiérrez taught art at Plaza de la Raza for over 20-years. “He retired two years ago, but everybody remembers him,” Herrera says.

With curatorial authenticity derived from a familiarity with and the inclusion of several important early works, the exhibition is pays heed to the artist’s deliberate use, during that formative period, of heavy lines and a slightly skewed perspective. The dark outlining of both human figures and inanimate subjects imbues them with a playful defiance.  In Chop Suey (Acrylic on Canvas), centered on a Little Tokyo landmark, the storefronts, asphalt and pavement are living, breathing repositories of a community’s history and heart. Their innate cultural validity-agency, alluded to in the saturated color, opposes erasure or relegation to phantom invisibility.

There, Gutiérrez retraced the Montemarte meanderings of Van Gogh, Cezanne and Gaugin, artists who broke from Impressionism and rejected schools of impersonal realism or representational. In this context, it is worth noting that a number of the Paris-inspired works feature old-world architectural elements—windows, street lamps and staircases—that verge on form-based abstraction but nonetheless invoke emotional depth and vulnerability.

Similarly, the monochromatic Wild Ride on 6th Street Bridge (Acrylic on Canvas) delivers an intensely visceral flood of foreboding, despite a limited palette. While ostensibly figurative, the painting seems intentionally fraught with a dangerously irreverent eagerness to dance lasciviously with a less than latent abstract expressionism. The subject of the painting, a car careening out of control atop the bridge, is symbolic. One false note, a single misstep, an unintended line or an accidental brushstroke from the hand responsible for Wild Ride is all that this recalcitrant abstraction needs to send the car over the edge, usurp the narrative and subvert the otherwise civilized Gutiérrez send off in honor the iconic bridge he was sorry to see destroyed.

By contrast, series of smaller gray-scale paintings depicting concrete and steel bridge details from the demolished steel girder structure—intentionally hung in an abstract pyramid pattern—is collectively rife with a forlorn sadness that coexists with each painting’s geometrically abstract, detached reference to the lost viaduct. Culled from a specific series called Elegy to the 6th Street Bridge, which debuted at Ave. 50 Studios, Gutiérrez says, they were the result out of a dark pall that descended upon him after a return from the second excursion to Paris and the successful opening of a likewise gray-tinted collection inspired by the 1930s and '40s noir legacy in Los Angeles.

“I felt like it was time to come home. I was ready,” Gutiérrez says, referring to the genesis of the aforementioned exhibition of work based on L.A.'s cinematic history. “That was really how the L.A. Noir show happened.” The wrecking ball that not long ago annihilated the bridge which had loomed so heavily over his past and in his imagination was simply a reminder that even monumental cement and steel wonders, like celluloid archives, are ephemeral vanities at best.

For Gutiérrez, who has courageously painted his way through murkier and bloodier terrain before, there remained one more distant prize on the horizon, one that harkened back to his boyhood walks along  Broadway at the height of an era when movie palaces—the Million Dollar Theater and The Orpheum, for example—glittered nightly with neon. First run films, red carpet premieres and Hollywood stars were frequent fixtures in and around L.A.’s original Broadway Theater District then.

“Because it was Broadway, you automatically thought of New York. Fred Astaire and Ginger Rogers,” says Gutiérrez. He credits Gabriel Jiménez and Plaza de la Raza Executive Director María Jiménez for their belief in the viability of an exhibition based on the evolution of his work over time. His late bloomer travel opportunities, he exclaims, have all been “dreams come true.”

“Everyone was getting ready for Christmas,” he says about his inevitable beeline to the oft-cited center of the art world. “We rode around Central Park in a horse-drawn carriage. So, yes, I feel very lucky,” says Gutiérrez. His genuine excitement and joy are effusive. They are occasioned by the tangible reflection of his aesthetic trajectory over the last several decades gathered in a formidable retrospective.

Grouped together as one “suite” in a semi-enclosed space to the immediate left of the gallery entrance, the East L.A. landscapes and a few of the bridge works function as the first of three segments or chapters. The roughly 20 combined works, however, would have made an equally beautiful stand-alone exhibition.

The Paris-inspired paintings and drawings and several more Elegy pieces fill the central section of the exhibition space, which includes a wall that creates a small entrance foyer just inside the double-door entryway. On the wall facing the entrance hangs Central Park in the Winter (Acrylic on Canvas). It is nothing short of magnetic and literally radiates as the single piece of art that gives Magical Brushstrokes a tender and timeless cohesion. In a strangely mystical way, the painting has been transformed, as if by some other-worldly alchemy.

Central Park in the Winter ceases to be merely a romantic dream destination for an artist who is the embodiment of anomaly. Through the power of multidimensional transmutation, the painting becomes the bridge Gutiérrez grieved for when he learned of its demise, the doorway that carried him over the L.A. River from Boyle Heights to the center of the City of Angels, once upon a time.

No longer content to span what is now just a cement-lined flood-control channel, the painting-as-park-cum-bridge has remolded and reshaped itself beyond the limits of causality and quantum physics. Guided by visionary arch-alchemist Roberto Gutiérrez, it now stretches from L.A.’s Eastside to Midtown Manhattan, then leaps directly to Paris where it will stand guard over the River Seine at sunset, from here to eternity.
#boyleheights #eastla Art News Chicano Art East LA College East Side Art Goes Global Plaza de la Raza Roberto Gutiérrez