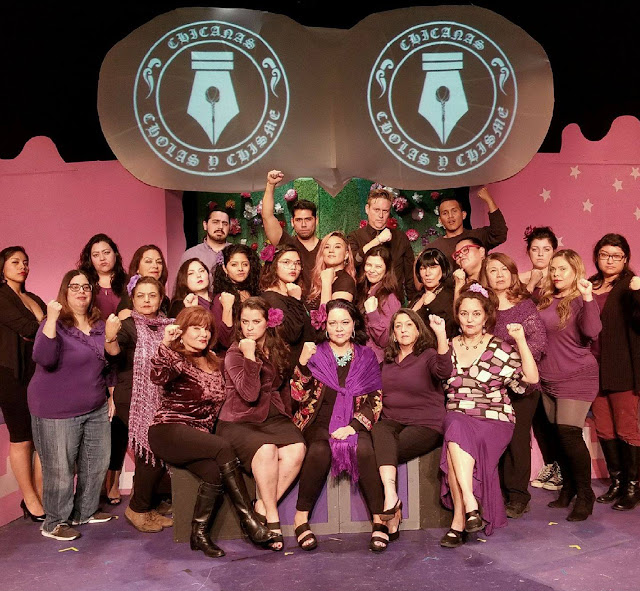 Josefina López, seated at center, and the cast/crew of Chicanas, Cholas y Chisme at Casa 0101.

I first heard about Casa 0101 in one of my Chicana Studies classes. My bad ass chingona professor Dr. Terri Gómez gave us—mostly young fiery women of color—glimpses into worlds and options beyond the neighborhoods we grew up in.

Josefina López—like Gloria Anzaldua, Ana Castillo, Rigoberta Menchu, Dolores Huerta, and Frida Kahlo—is a staple, a pillar in Chicano/Chicanx community. She, like each of those named, became a change-maker through diligence and hard work.  They all continue to spark fires in successive generations of revolutionary spirits, and they breathe life into Chicana Feminists when the world attempts to drown out our voices.

Since hearing of it, I have wanted to visit Casa 0101, which had grown to include two spaces over the last few years, according to what I’d heard sometime after graduating from college with a degree myself. Last weekend, at long last and much to my delight, I finally made it out to see Chicanas, Cholas y Chisme: Stand Up! Speak Out! the sixth annual showcase of original one-act plays written, produced and directed by womxn.I’m beyond happy that I did. It made me realize that high quality, inclusive community theater is what has been missing from my life.

As parents, the search for entertainment we can share with our children, or enjoy alone during those rare moments we can take a break, is a part of life. I often find myself doing the movies thing and am pretty much over it, to be honest. As a person, I feel less connected to the actors and creators.

Watching the show, I finally felt represented in what I was seeing. There was a real connection, to REAL issues and struggles we face on a day-to-day basis in our communities. From military sexual trauma, to cycles of violence in our families and neighborhoods, to the institutional oppression and discrimination of undocumented students, to the #MeToo movement and generational assaults on women’ s bodies, to young people waking up and walking out, demanding the right to a college education.

It was difficult to fight back tears. I have never experienced something so powerful, and genuine. This raw energy and magic was something the movies could never offer. Somehow, I could relate to each scene. I laughed A LOT. It’s so beautiful how our community has had to use laughter to heal deep wounds. The laughter is almost revolutionary, like a war cry, as we women battle oppression at every level, at every turn.

Although the entire performance was—in my opinion—absolutely phenomenal, a few moments in a number of the short plays really spoke to ME. I was moved profoundly by Combat, Marianna Herrera’s story about a woman in the military struggling with PTSD. After beig continually assaulted and harassed by a higher-ranked person, the woman learns her peers who were also abused have managed to “shake it off” or bury it deep in their subconscious memory. But she is unable to.

For a long time I felt a certain way about the military and the type of people who join. More recently, however, I’ve had the opportunity to work first hand with the Veteran community, particularly Latino veterans and women veterans, and my perspective has broadened greatly as a result. Thanks to Esperanza Ortega, founder of Almost Home Transitional Housing for Female Veterans, I learned that these are our brothers and sisters in our communities. Literally and metaphorically. For whatever reason they may have chosen to enlist, I believe the military failed a vast number of them.

Cycles, written by Suzanne Linares and directed by Angela Moore, also hit very close to home. This piece addressed the cycle of violence in our communities, manifested across three generations of womyn. It showed how we carry trauma and either knowingly or unknowingly pass it to our children.

I could barely keep from crying as young girl’s teacher steps in at the end to file a Child Protective Services report. The girl bravely announces that she feels she’s been heard for the first time. Being heard is critical to a child’s health and well-being. The family responds by getting the help it needs. As a person impacted by foster care personally and through the youth I serve, it was so powerful and refreshing to be represented.

Once Upon A Time... Con DACA, another piece I found extremely relevant and personal, was written by Rocío Díaz and directed by Claudia Durán. It underscored how the American Dream has been robbed from our Dreamer brothers and sisters. Many of us who are Latino have family who is undocumented. Many times, as a first generation Mexican American I have felt extremely LUCKY and privileged for my citizenship. In college, I worked alongside undocumented peers, many of whom became part of my extended family. They often had to work two or three times as hard to earn their degrees, only to be let down by the same system that sold them the dream.

With a hashtag, writer Sujey González lets us know her play, #timesup, is a response to the revelations by women about sexual harassment, abuse and even rape they were subjected to by predatory men who used their status, power and influence to avoid punishment or prosecution. Directed by Claudia Durán, the story revolves around a Latina student on scholarship at a university who is violated by a star athlete. When she reports him, the dean of admissions dismisses her claims and acts to protect the perpetrator, whose parents are wealthy donors to the school. The gloating quarterback, however, unknowingly provides his victim with the key that allows her to ensure he faces consequences for his crime.

Every play in this montage of one-acts was powerful, intelligent, well-written and impeccably executed by amazing local actors, playwrights, directors and producers. From the warm welcome by Associate Producer Mariana Herrera, to the genuine connection I felt with Associate Producer Patricia Zamorano, I sensed these community connections to be a critical piece of our social fabric, one which we do not find in mainstream media or entertainment.

Each and every actor’s performance was genuine, from a real place. I am so thrilled I was able to see this talent being cultivated in my community. In fangirl mode, I met a few of the actors and got their autographs on my playbill. Refreshingly, they were all sweet, humble, and approachable, which was important to me as a single-mom who can't get out all the time.

After the last curtain call, we were invited to join Casa 0101 Artistic Director and co-founder Josefina López, who celebrated her birthday at her Casa Fina Restaurant up the street in the heart of Boyle Heights. For a long time, I’ve admired her work and contributions to our culture,  particularly in the area  of visual arts and community theater. But as much as I wanted to meet her, it was late and I had a long ride ahead. Unlike most people, I took the train over the hills and through the woods to see this gem, worth every cent of the ticket price.

A long-time resident of the San Gabriel Valley, I have frequently sought out local art programs, organizations and events for my family. Theater is rarely accessible. I have been looking for theater classes for my daughters. Life can be so regimented, it has occurred to me more than once that theater would be a good way to let loose and build upon other skills, such as outside of the box thinking, critical thinking and the ability to tap into and manage our energy as well as emotions. While purchasing tickets online at Casa0101.com, I was pleased to discover they also offer a wide array of theater classes for youth and adults.

I’m glad I was able to make my way there, finally. It was definitely worth it. I am proud I could attend and support an organization that does such important work in our communities. For those of you who value community-based programs that keep youth engaged and off the streets, I encourage you to consider becoming a member of the CASA 0101 “350 Campaign.”

As many may know, it is very difficult to sustain arts-related non-profits in neighborhoods where residents struggle with basic quality of life concerns and the looming shadow of displacement constantly. CASA 0101 has issued an urgent request for 350 Sustaining Members willing to make a monthly contribution of $25 or more.

This founding cohort of art patrons, or East Side Latino Art & Culture “Angeles” will ensure that Casa’s doors remain open. A special package of VIP gifts, exclusive advance ticket pricing offers and special member events based on the year-long commitment to saving the cherished community playhouse awaits those who join the noteworthy group of sustaining Angeles.

Members who contribute as part of the Casa 0101  “350” will also be a supporting hub for art exhibitions, playwriting classes and acting classes by professional instructors at every level, and innovative educational programming which has had a tremendous impact on the surrounding neighborhood of Boyle Heights and across the greater Los Angeles Chicano/Latino Community overall.