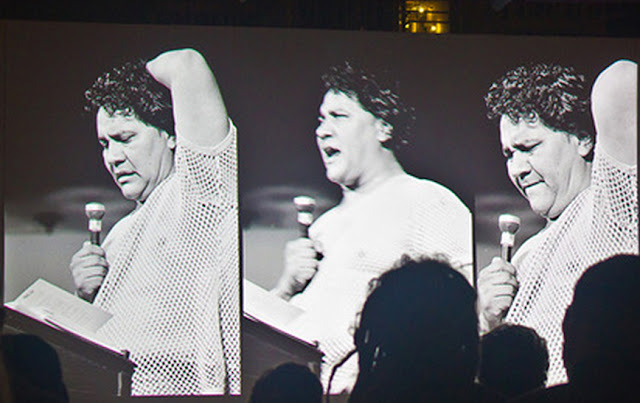 A scene from The Rise and Fall of the Brown Buffalo. Photo by Michael Sedano

Filmmaker Phillip Rodriguez still can’t take his eyes off the metropolis he calls home. If anything, his gaze has intensified, zeroing in on the untold paradigms of racial divide and the dynamics of difference that have long beleaguered Los Angeles, a city not yet completely comfortable with its Mexican soul.

In the 14 years since the broadcast of Los Angeles Now—one of his earliest documentaries for PBS—an examination of the demographic shifts that signaled the “browning of America,” the now grey-bearded Angeleno has mined contemporary issues of race, identity and cultural diversity with increasing depth and intuitive foresight.

This even as his lens, calibrated by an acute, erudite and humanist Latino perspective, has been artfully rotated toward the past. His recent focus on subjects culled from the period of social turmoil and political unrest that erupted in Los Angeles during the 1960s and ’70s has already given us Ruben Salazar: Man in the Middle. Aired in 2014, Rodriguez’ nuanced and thorough portrait of slain L.A. Times journalist Ruben Salazar shed additional, if not startling, light on the mysterious death of the celebrated newsman. Just as importantly, it was the first broadcast media project to make use of L.A. County Sheriff’s Dept. files and documents on the case, material Rodriguez and his colleagues filed suit to have released.

Tonight, timed to compliment the 50th anniversary of the East L.A. Chicano Walkouts, PBS will air his latest effort, The Rise and Fall of the Brown Buffalo. A dazzling, unconventional documentary on the tumultuous life of author and Chicano civil rights lawyer Oscar Zeta Acosta, the film is a fitting coda to the bellwether moment half a century ago when 15,000 courageous high school students walked out of their classrooms to protest educational inequality. When a group of 13 walkout organizers were arrested for orchestrating the largest student strike in U.S. history, Acosta defended them.

Even before winning a dismissal of all charges against the “East Side 13,” self-described “Brown Buffalo” was already familiar to Chicano movement activists in Los Angeles for his firebrand revolutionary fervor and confrontational, anti-establishment politics. Coupled with his disposition for hard-charging, excessive consumption of alcohol and controlled substances and a notoriously libertine philosophy with respect to sex, his courtroom antics and bluster cemented his reputation as an outlier. His 1974 disappearance in Mexico at age 39 remains an unsolved mystery.

Four days before a screening of the film in downtown L.A., Rodriguez sits at a table inside the spacious bar at a well-known French restaurant on Sunset Blvd. Maybe he mulls over the warm response to the Brown Buffalo story and its unapologetic, heavy-set, mestizo protagonist at film festivals in San Francisco, Orange County and Fairfax, Virginia where it has already screened. Or perhaps he simply savors a glass of red wine and looks back on the career trajectory and life journey that have led him here, on the heels of a film he knew he was destined to make.

When I finally catch up with him, it feels like a reprisal—a resumption, really—of a lucid conversation we'd had at the very same bar in 2004 over steaming bowls of French onion soup. In October of that year,  Los Angeles Times Magazine sent me to interview the filmmaker there about Los Angeles Now, which was to air a few weeks later in November. The article, which represented his emergence as a nationally prominent documentarian, was published on October, 17th. The headline read: “Welcome to Post-Anglo L.A.”

“I’ve wanted to do this film for so many years, as you know,” Rodriguez says of the Acosta project. “I even tried it when I was fresh out of film school.” Glancing around, I notice he and I are the only two Latinos in the room. Oddly, not a single one of our servers, waitstaff or barkeeps is brown.

“I’m sure they all know Hunter S. Thompson but have no clue who Zeta was,” I add.

“Oh, they don’t give a shit,” Rodriguez says before getting back to the reasons he was compelled to make a film about a contentious figure in the Chicano struggle for civil rights who battled clinical depression and aspired to a literary life. Referring to Acosta as “the Buff,” Rodriguez veers toward reverential when he describes the subject of his new documentary.

“It was something I wanted to do. I was preoccupied with him as a character. I was just fascinated by this man,” explains Rodriguez. “I felt like he was a problem that I had… and one that I wanted to solve for myself, a well as an opportunity, cinematically, to tell the kind of intimate stories I wanted to tell about strange people that had never gotten their due.”

To illustrate, he explains that the vast majority of those who’ve read Thompson’s Fear and Loathing in Las Vegas, still have no idea that “Dr. Gonzo,” a character described by Thompson as a “300- pound Samoan” was based entirely on Acosta. His film, says Rodriguez, was meant to be both: a catalyst for restoring Acosta to his place in U.S. letters as a crucial Thompson foil and friend who merits acknowledgement for “Gonzo journalism;” and a primer on Acosta for the next generation, many of whom are newer Americans and unfamiliar with movimiento history.

“Ultimately, the goal of the project was to hand Oscar off to the kids. The idea of passing off a colorful, courageous, nutty, impossible, over-the-top, chaotic, bright, urbane, capable, impatient, Chicano mestizo feels like the right guy for today,” Rodriguez explains. “They’re newly arrived. These kids are all here after Reagan’s amnesty. They’re not multi-generation Chicanos like us.”

“They appreciate Oscar’s chaos. And for them, the civil rights era has been so packaged, so manicured, sanded down of its edges and splinters and contradictions,” continues Rodriguez, “that a guy like Oscar, who’s irredeemable, but still joyful, is good for them.”

To make Acosta—and the film—more accessible to a nascent wave of young Latinx activists and Dreamers, Rodriguez turned once again to Claudio Rocha, a cinematographer, editor, and animator with whom he has worked closely since the two met in film school.

“Claudio gets it, gets us culturally and spiritually as Chicanos. He’s the most Chicano Chilango you’ll ever meet,” Rodriguez says. “And he’s really good. He could be doing big Hollywood movies, but because he’s thoughtful and deep, he’d rather work on things like this.”

In addition to shooting and editing Brown Buffalo, Rodriguez says, Rocha created exclusive, comic book-style animation of courtroom scenes in Los Angeles that virtually pop from the screen. Using actors in the roles of Acosta and Thompson, among others, the film presents them in dramatizations based on meticulous research. The actors are “interviewed,” much like subjects in a traditional documentary format. Their responses are taken directly from things they wrote, or, in the case of several who knew Oscar and are still living, from taped interviews conducted by Rodriguez and his crew
.
In addition to getting Benicio del Toro, who starred as Dr. Gonzo in a film based on Thompson's Fear and Loathing opposite Johnny Depp, to sign on as Executive Producer, Rodriguez also enlisted the talents of Producer Alison Sotomayor (Bridging the Divide: Mayor Tom Bradley and the Politics of Race) and Associate Producer Ricardo López (Ruben Salazar: Man in the Middle)

“Alison is just fantastic. She really kept us all on track and guided the project. We couldn’t have done it without her,” says Rodriguez. He is effusive, too, about the series of five podcasts that accompany the film and were produced by Marcos Najera among others. The podcasts go live during the broadcast (Friday, Mar. 23, 9pm, PST). The podcasts, he says, include interviews with Acosta’s friends and family as well as literary scholars and Chicano activists who provide a more profound look at the significant and complex legacy Acosta left in his wake. The marketing and promotion, Rodriguez offers with equal excitement, includes a social media component led by Carlos Aguilar, who he likens to “a wizard… all over Facebook, Twitter and Instagram” and credits with the underground buzz about “the Buff” spreading virally.

The creative hype behind the film also includes large-scale still projections on the exterior walls of City Hall, a poster campaign with artist Shepard Farey that features a supersized version of the original poster from Acosta’s quixotic political campaign for Sheriff of L.A. County in 1970, a race in which he received roughly 100,000 votes. Ironically, the documentary features cameo performances by former L.A. Mayor Antonio Villaraigosa and California Attorney General Xavier Becerra as judges Acosta faces off with in court.

With the film, Rodriguez hopes to remind those who will follow us that it’s okay to embrace political activism with passion and joy. Being serious and having a good time are not mutually exclusive. In the end, we should understand that it’s okay to work for social justice and then have a few drinks. Resorting to a bit of Brown Buffalo wisdom for emphasis, he quotes Acosta verbatim, “The revolution shouldn’t be a drag.”
1968 Walkouts Brown Buffalo City Projects East LA Gonzo Journalism Hunter S. Thompson Independent Film LLC Oscar Zeta Acosta PBS - Voces Phillip Rodriguez