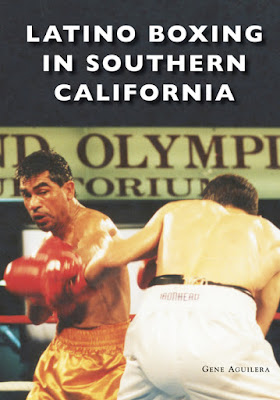 In a brilliant follow up to his break-out bestseller, Mexican American Boxing in Los Angeles, writer, historian and genuine L.A. boxing raconteur Gene Aguilera is back with a new blockbuster book, Latino Boxing in Southern California. A community bank vice-president by day, Aguilera has pursued one of his life’s greatest passions— boxing as a both a competitive and commercial sport—with an intensity and zeal more akin to that of a single-minded, indefatigable scholar than that of even the most fervent aficionado or enthusiast. Given his intimate familiarity with boxing history and his vast reservoir of knowledge and understanding vis-à-vis the sport he has been enamored with since childhood, it was really only a matter of time before Aguilera provided us with a fascinating new window into the world of championship boxing and its untold histories.

His first book, Mexican American Boxing in Los Angeles (Arcadia Publishing, 2014) is arguably the most thoroughly documented and well-written historical survey of the sport from a perspective that has been, until now, absent in the official U.S. boxing history annals.  Fortunately for us, Aguilera has been involved with boxing at every level, first as a fan and then as a boxing manager who represented a successful young athlete and, finally, as a Boxing Hall of Fame inductee.

Widely admired and respected throughout the country as boxing historian, Aguilera sold out the initial edition of Mexican American Boxing in Los Angeles. A critical and vital contribution to sports history, it established a clear distinction between U.S. boxers of Mexican descent who were either born or reared from early childhood in the City of Angels and the prizefighter hopefuls who came to Los Angeles from everywhere to prove themselves in the ring against the fearless and formidable Chicano gladiators who dominated California boxing for most of the last century.

While generally ignored by the national sports press until Oscar De La Hoya rose to fame in the 1990s as East L.A.’s Olympic champion and “Golden Boy,” these forgotten paragons received their due, finally, in that debut effort by the author, amply illustrated and documented with photos, posters and souvenir programs from famed and not-so-famed but equally important matches and title fights outside of the heavyweight division.

Tracing the history of West Coast boxing back to its roots, Aguilera offered irrefutable proof that Chicanos, or Mexican Americans, have been a defining component of competitive sports in the U.S. for at least 100 years. With Latino Boxing in Southern California, Aguilera broaches further uncharted boxing history by examining the undeniable role of Mexican-born pugilists in the growth and expansion of boxing, both on the West Coast and internationally.

Often fighting as representatives of national pride in a good-natured rivalry between two intricately interconnected countries, many of these ambitious fighters adopted Southern California as their second home. Some made it their permanent base as a result of their success and the sense that they shared something special with their U.S.-born counterparts, the love of countless SoCal boxing fans who followed them and rooted for them. It was a love that united them all within the sport as a fellowship of athletes even as they battled it out to the bitter end in storied bouts hosted by arenas and auditoriums in cities such as L.A., San Diego, Tijuana, Mexicali and Mexico City. In an attractive volume highlighted by full-color photos that do justice to all the inherent passion and drama, Latino Boxing in Southern California firmly establishes Aguilera as a preeminent authority on the “sweet science,” particularly where its development and maturation in Southern California is concerned.

Written with a keen eye for colorful description and a charismatic charm bolstered by meticulously researched and documented statistics, names, dates and places, Latino Boxing in Southern California is an indispensable companion to Mexican American Boxing in Los Angeles. With over a hundred color images that include rare photos and scaled down reproductions of original print memorabilia from the sizable collection Aguilera has amassed over time, the book is a testament to the resilience of those who rose from hard scrabble streets on either side of the U.S.-Mexico divide as well as far-flung places in Africa, Latin America and Europe to become legends in the ring.

Some fought for the right to represent Mexico in contests that pitted them against those with whom they shared a common cultural heritage but who were, conversely, fighting every bit as hard to prove how truly American they were. Others, no less serious in their pursuit of triumph and glory were intrinsically—perhaps genetically—aware that the northward and southward migration of people from across the Americas had occurred for thousands of years before the arrival of Europeans on this continent and was as natural as the ebb and flow of the ocean tides. These were fighters most at home in a gym training for their next contest. They understood that true world champions had no use for flags or trumped up patriotic allegiance to national symbols that, throughout time, have been used to fan the flames of hate and intolerance.

Boxing, as Aguilera subtly suggests, belongs to everyone. The sport itself, especially in California, brought people of every creed, ethnic origin and color together as a family that cheered for the underdogs and respected truly great warriors no matter where they were born, what language they had grown up speaking or what neighborhood they may have been part of before they were embraced by the state’s world-class and inclusive boxing community.

The author alludes to how the line in the Southwest desert region stretching from Texas to California which forms the southern U.S. boundary created rivalries and adversarial relationships between Mexican and Mexican American contenders in all weight classes. At the same time, it underscored an unspoken transborder brotherhood among those who tested their mettle against one another in the ring and took pride in the sportsmanship which has long defined the West Coast boxing milieu.

Published in a beautiful, glossy edition brimming with vivid details and anecdotes only a boxing insider with exclusive access to fighters, promoters, fans, and an extensive personal memorabilia collection in two languages could have written, Latino Boxing in Southern California expands upon the groundbreaking research and historical rigor which characterized Aguilera’s previous work of non-fiction. Organized in chapters based on successive decades beginning with the period from 1900 to 1940, followed by a chapter for each of the following ten year spans and concluding with a chapter titled “The 2000s,” the book includes an appendix and a glossary of terms.

Signed copies of Latino Boxing in Southern California are available directly from the author, who can be reached via email at geneaguilera@sbcglobal.net or by phone at (323) 697-7197. Both books are also available through the publisher at www.arcadiapublishing.com
Boxing Hall of Fame Forgotten Champions Golden Boy Latino Boxing in SoCal Legendary Gladiators Mexican American Boxing in L.A. Mexicans Win World Boxing Titles Since 1952 Oscar De La Hoya Pugilism