Hands Off Venezuela: The Threat of Imperial War in the Américas 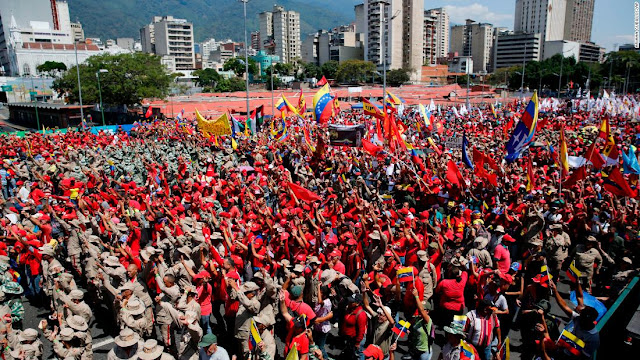 One of the great anarchist anthems from the period of the Spanish Civil War begins with the proclamation, “Black storms agitate the winds, dark clouds won’t allow us to see.” Dark clouds are indeed gathering in the southern hemisphere, over the shattered dreams of the Bolivarian Revolution in Venezuela.

Having already broken families in the southern border, imprisoning children in detention camps, the Trump White House now pretends to spearhead a campaign of liberation aimed at Caracas. The question the current coup attempt and possible march to war poses for progressives and radicals—in particular those of us here in L.A.’s Latinx community—is how to approach the issue of Venezuela soberly, while strongly opposing imperialist designs on our southern neighbors.

First it must be made clear that any U.S. intervention in Venezuela, already ongoing, which results in war or the complete overthrow of the Maduro government, will have serious consequences all over the hemisphere. The first government which will no doubt feel the repercussions is the Andres Manuel López Obrador administration in Mexico. Fascism is now in power in Brazil, reactionaries rule Colombia, Argentina and Ecuador. We are fast approaching another variation of what the 20th century revolutionary Victor Serge called “midnight in the century,” when describing the world of the 1930s.

The stage is being set for a terrible drama. Independent Venezuelan outlets such as Aporrea.org report that the British battalion that partook in the 2003 invasion of Iraq has been carrying out exercises off the Venezuelan coast. Tim Johnson of McClatchy, who helped break the Panama Papers scandal, reports of strange arm shipments making their way from the U.S. into the Bolivarian country—shadows of Reagan’s Contra War in 1980s Nicaragua. Mike Pompeo has tapped Elliot Abrams, an architect of the death squads that rampaged through Central America during the era of The Gipper, to oversee the current operation against Caracas.

Those of us old enough to remember the lead-up to Iraq recall the Bush regime’s appeals to our humanitarian impulses, framing the onslaught as liberation via bayonets. “We will bring to the Iraqi people food, and medicines and supplies and freedom,” proclaimed the self-professed Texan Caesar. For Venezuela, liberation is now being spun to mean allegiance to a self-proclaimed interim president, 37-year-old unknown named Juan Guaidó. Groomed from within the ranks of the ultra-right and allegedly racist Voluntad Popular party, from which even the traditional Venezuelan opposition keeps its distance, Guaidó has all the charisma of a brick, and ironically seems less European-looking than most of his supporters, but he is Washington’s man. Privatization of the state oil company PDVSA is his agenda and no doubt the quashing of any rivals as well.

At least in the 1970s the CIA was able to find Prussian-dressed monsters almost conjured out of Goya, like Augusto Pinochet. Today we get technocrats in boring suits and ties. Much of Europe, with the exception of Italy and Greece, are following imperial dictation and are recognizing Guiadó as Venezuela’s president. Now we have a situation of dual powers at play in the land of Simon Bolívar. And yet, the situation is a haze.

Since the passing of Hugo Chávez in 2013, there has been a steady divide amongst leftists when it comes to approaching Venezuela and its experiment in Bolivarian “socialism.” Nicolás Maduro, lacking Chávez’s magnetism and wit, has run the state in a strange, incompetent fashion. It cannot be denied that the economy is in shambles—not because of socialism as an idea, but because of the old Latin American curse of corruption, and the more practical issue of a country almost entirely dependent on oil exports not diversifying its economic portfolio to include agriculture, industries and other sectors.

It is precisely this mismanagement which has opened the door for U.S. interventionism, which was difficult to conceive when Chávez was alive and promoting regional integration. Even before the blonde menace entered the White House, the U.S. had already begun responding to social conditions in Venezuela with its usual brand of kindness, sanctions, despite the much ballyhooed moment in 2009 when Chávez personally handed then-U.S. President Barak Obama a copy of Las Venas Abiertas de América Latina (Open Veins of Latin America: Five Centuries of the Pillage of a Continent) by Eduardo Galeano.

There’s nothing like strangling an opponent’s economy when it’s down. But who is calling for sanctions on Honduras? A coup regime installed by the military there has been in power for a decade now, after overthrowing—with a tacit blessing from the Hillary Clinton-led U.S. State Department—the democratically-elected government of Manuel Zelaya, turning the country into a death chamber and provoking a wave of refugees now amassed in our southern border. Ah, but that is a case where the thugs in power are our thugs, armed and funded by Yankee dollars. The Trump White House and Guaidó justify the effort to topple Maduro based on the idea that he is illegitimate (as tends to happen when those we don’t like win elections).

Yet, Honduras has been undergoing a wave of protests following quite fraudulent elections in 2017. But in that corner of the Americas the right candidate “won,” so therefore he is free to break bones and bash faces. One does not need to be a fan of Nicolás Maduro, or the rough-voiced Diosdado Cabello, the virtual second in command in Caracas, to stand against U.S. imperialism in the region. Venezuela is not being targeted because The Donald, who didn’t flinch when children were torn from their parents or died at the border, suddenly feels a pang of compassion for Venezuela’s migrating poor. Even when the Venezuelan economy was booming in the 2000s, when oil was selling for hundreds a barrel, the overlord of this hemisphere was determined to crush an example of national independence offering the idea of an alternative to capitalism, comparing Venezuela to Iran as part of an “axis of evil.”

Ideas are more dangerous than people, because they transcend national boundaries, they can travel through print, the internet or by mere example. The fact that a government still calling itself Bolivarian, which supports regional integration, which proclaims solidarity with the Palestinians, remains in power is unacceptable as a reactionary wave sweeps the region. Those claiming to be representing the flags of humanitarianism know what will come after Caracas falls. Cuba and Bolivia will follow, or Nicaragua before them. Indeed, Managua too is governed by forces one can certainly criticize, and the Nicaraguan people, like the Venezuelan masses, have the right to change their government in their way when they see fit. But we are not witnessing mass insurrections.

We are not seeing the streets aflame as in the Arab Spring in that glorious year of 2011. We are seeing a great nation undergoing complex convulsions, a mixture of class war and possible civil war. Guiadó does not have the poor barrios with him, even if they are impatient with Maduro, because they know the old ruling class is preparing to reinstall itself, backed by U.S. troops if necessary. The message will be doubly clear for Mexico, where López Obrador could face the same fate if he pushes his experiment in Aztec social democracy too far. Remember that black gold is also Mexico’s curse.

If the Trump administration cannot convince the Venezuelan military to overthrow Maduro, then it is conceivable that a march to war will begin with the approval of diehard neo-liberal boosters such as The New York Times and, now, even our allegedly progressive new media like Remezcla behind it. The old neocons—foremost among them John Bolton—have returned, like specters from the past, whispering in the emperor’s ear. Here in the Latinx community we must ask ourselves if we should trust this government, which has been so cruel in its rhetoric and actions towards immigrants, and has assaulted our brothers and sisters at the border, when it claims to seek the liberation of Venezuela. If Maduro has not served his people well, then that is for them alone to judge.

One almost feels heroic pity for the common Venezuelan people, who find themselves in the middle of a great storm, one not of their choosing. When the European monarchies rallied against the French Revolution, Robespierre warned that if the Republic were to fall, “despotism, like a shoreless sea, would spread across the surface of the globe.” We face the same juncture today in Latin America. Let Donald Trump, Brazil’s Jair Bolsonaro and Colombia’s Ivan Duque decide the fate of Venezuela and the region will be enchained for generations.
Hands Off Venezuela Let Venezolanos Decide Oligarchs & Their Sycophants Suck Petroleo es del Pueblo Yankee Go Home