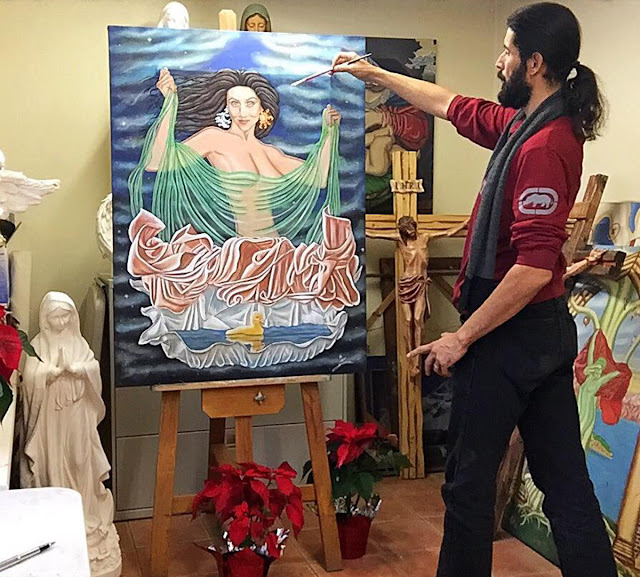 Gushan, a self-taught painter and sculptor who is, ironically, a highly sought after ecclesiastical artist, in City Terrace.

Gushan is something of an enigma. To begin with, his name is not really “Gushsan.”  The word is a hybrid compound of sorts.  Think Gustavo. Think “h” something and think Sánchez. But since 1997, when the interdisciplinary artist arrived in Los Angeles and located himself in the middle of one of the most notorious barrios on the Greater East Side, he has worked very hard to grow as an artist and become a more conscious human being in the process.

And, as a consequence, he just might be the most famous and important L.A. artist you’ve never heard of. That is, unless you watch Spanish-language TV, listen to Spanish-language radio or read Spanish-language newspapers or magazines, because he’s been on or in almost all of them. Born in Guadalajara but raised in Tijuana, he began teaching himself to be an artist in many different media even before relocating to East Los Angeles 22 years ago.

“I met Sister Karen Boccalero at Self Help Graphics and many of the incredible Chicano artists she was working with right after I came here. They inspired me with their beautiful murals and silkscreen poster art,” says Gushsan. He is not so much concerned about having the world know his name as he is about leaving behind a legacy of art that inspires others the way he was inspired when he got to East Los.

His studio, a two level building at the corner of Geraghty Ave. and Herbert Ave. in the City Terrace section of East L.A., appears to have at one time been the offices, kitchen and residential quarters for the clergy of a church next door. The kitchen and office areas—on the bottom floor of the space—are bursting with paintings, ecclesiastical art and sculptural work, some finished and some still in progress. The collection is evidence of a tireless commitment to making art constantly and a range of commissions for site specific works.

Though not particularly religious, Gushsan has, ironically, become a renowned creator of work in both two and three dimensions for churches throughout the U.S. and Mexico. “I get an email or a letters from a church somewhere asking me if I can create a religious sculptures, statuary, a large scale crucifix, paintings or, in some cases, a life-size tableaux scene from the bible,” Gushsan says. “I do believe in a supreme being or creator, but I don’t go to church or subscribe to a particular religious order, denomination or sect.”

His success and rise to prominence as an artist, however, has not been limited to religious art. Gushsan has also: created sets for Vicente Fernández concerts; designed elaborate, thematic dresses for Miss Mexico beauty pageants; built custom parade floats; and even painted murals on both buildings and cars. His most recent mural, on the walls of the Tortilleria La Favorita, just blocks from his studio, is called Coatlicue. It features pre-Colombian iconography and is dedicated to “maíz” or corn as a sacred gift of sustenance from the earth.

Its central figure, his own interpretation of the goddess Coatlicue, features a beautiful woman enshrouded by vivid green and yellow depictions of the Aztec staple. The legendary Mexican vocalist and superstar entertainer Graciela Beltrán was his model for the deity, Gushsan explains. Even before approaching Alfredo and his wife Rosa María Luévano—owners of the tortilla factory and neighborhood market—for permission to paint a mural on the exterior of their building, he says, he made sure to ask the iconic Mexican singer and famed television actress for permission to use her image.

The mural has become a touchstone for neighborhood unity and peace, says Gushsan, much like the chickens, goats and sheep he keeps in the back yard at his studio, a terraced hillside on which he also grows corn and herbs used for cooking. Both the mural and the goats—which have nibbled down bushy overgrowth to create a neatly manicured hillside lawn—are now a source of local pride, with local seniors coming to visit the animals and often bringing their grandchildren along and tough looking neighborhood youth vowing to protect the mural from vandalism.

This commitment to nature and becoming a better steward of the planet and its natural environment are at the root of all the artwork the artist imagines and creates. He is currently working on a book which features his artwork and his thoughts on art.  See more of Gushsan’s artwork and learn about his philosophy with regard to art-making at www.facebook.com/gushsan.