October 11, 2019
A TRIBUTE IN HONOR OF THE 10TH ANNUAL EL VELORIO DAY OF THE DEAD FIESTA
By L.N. Amoratto

It’s all about the ofrenda, you know, the trunk-load of plywood cut into uniform shapes. Pelayo has it down. You give an army of artists what passes for a universal canvas that doesn’t cost an arm and a leg and obligates everyone to work with the same piece of wood shaped into a cross or lucha libre mask or something else he’ll dream up soon and which will allow him to include pretty damn near 100 artists in an exhibition which will grace the walls of the Plaza de la Raza Boathouse Gallery at Lincoln Park.

And all 100 of them, well, most of them, will be asked to try and sell ten tickets. Few will succeed.  They will, instead, give the tickets away and pay for them out of pocket. A substantial portion of the money goes to keeping the lights on at Plaza de la Raza, and the look of worry off of director María Jimenez’ face, because you wouldn’t believe how much it really costs to operate a non-profit cultural arts facility like that.

So Pelayo keeps coming back, like a machine. He is newly married and his older son Isaac has a new baby sister as a result.  Isaac, it goes without saying, is breaking out seriously as an artist himself in much more than just a chip off the old block manner. But what he does share with his father Antonio is a studied and implacable determination to create, curate and produce on a scale that moves entire communities and leaves everyone breathless at the end of the evening. 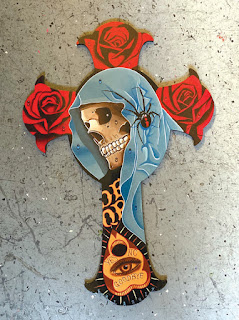 And breathless you will remain, secretly giddy that the beautiful but ethereal girl or boy or angelic, gender neutral embodiment of your physical and romantic ideal, had looked back over a cloaked shoulder and stared directly at you, then slowly lowered and raised a long-lashed eyelid in what had to be an exaggerated slow-motion wink meant for you alone. Finally, after flashing an irresistibly exaggerated, come-hither calavera smile, the mysterious figure had charged forward, through the open gateway, disappearing in an instant without so much as a word. So you run back into the gallery, shouting for Antonio, asking urgently for one of the bare, unfinished, wooden cut-outs made from a template based on the shape of a Celtic Cross.

You borrow a Sharpie from Fernando Barragán,  “the Picasso of Lincoln Heights,” promising to pay him back later with an horchata stout brewed in Monrovia by a Mexican American craft beer maker and poured from a cold mini-keg at the original La Chupería a few blocks down the street. You write a poem on the smooth side the the unpainted wooden crucifix on the fly while walking quickly back to the gates. Within minutes you’re running through the Plaza de la Raza parking lot to catch up with the androgynous celestial being who’d smiled in your direction while passing through arched gateway exit.

Of course, the other-worldly vision of beauty will have already disappeared. It couldn’t have ended any other way.  The ofrenda exhibition at El Velorio—now in its tenth year—that has brought you and curator Antonio Pelayo and a multitude of others together, in a community space you cannot help but love, is over. Behind you the crowd is thinning out. And you sigh with genuine pleasure despite having lost sight of the ephemeral visitor who might have touched down on earth for only a moment merely to fill you with wonder and desire.

The wonder and desire linger. They inspire and illuminate, reminding you that you’re on the East Side, in Lincoln Heights, and everything is cool.  After the brewski with Fernando, you will head home with the left over Chuper-nachos de pastor in a to-go box because you haven’t been able to get the mysteriously elusive incarnation of la muerte out of your head.

It could be that you found something oddly familiar in that finely attired and opulently appointed calaca, the alluring figure who’d ghosted you. No matter that you’d been left hanging with a wooden cross bearing a handwritten poem, a string of hopeful haikus composed to ignite an aloof, unresponsive heart... or were they verses subconsciously meant to rekindle a flame that had burned there once before? Now it seems you’ll never know.

On your final visit to the bathroom at La Chupería #1 you hide the cross in a cabinet with paper products, wash your hands for about the tenth time that day and wonder if you’ve cheated death once again, or if death has cheated you. The thought brings you back to that enigmatic stranger with prominent cheekbones underneath a virtuoso face-painting effort so hyperrealistic you’d swear it was designed and applied by a professional.

You chuckle quietly as you imagine a savvy Xicanx make-up artist scoring remaindered Max Factor cosmetics at a secret boutique off of Rodeo Drive on the other side of town.  You laugh out loud when you realize that from where you’re standing on Mission Road, Beverly Hills might as well be on the other side of the universe, impossible to reach, even if you really cared to.

Except everyone knows you, of all people, don’t. You are bound to the other BH... Boyle Heights.  And what about the possibility that the mysterious, glittering apparition... la catrina cara dura who’d winked at you earlier had been an actual emissary from the other side of existence, a soul who’d broken through the veil separating life and death to seduce you?!  You ponder this as you look through the La Chupería doorway directly across the street and see the historic brick facade of the Los Angeles County Morgue. 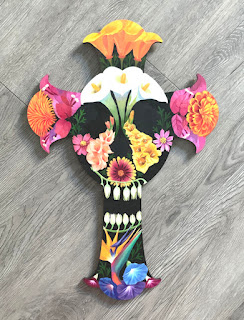 You decide you’ve imagined everything, including the stranger.  The Uber you eventually order will deposit you about two blocks from Mariachi Plaza. You’ll smile because, either way, whether or not you were supposed to glide across the dance floor for life’s final waltz, you couldn’t have asked for a better companion to guide you into the hereafter.  At the two-story house built in 1903 and now converted into three separate dwellings, you’ll climb a flight of steep wooden stairs, make yourself a Greyhound with juice from a fresh-squeezed white grapefruit courtesy of the tree in the shared back yard. Climbing into bed, you’ll sigh again before nodding off, and all will be right in the world.

Sleeping in on Sunday morning, you’ll wake up looking forward to a month long celebration of Día de Los Muertos. Who knows? You might catch another glimpse of the striking huesudx who’d slipped away at El Velorio like a shadow. You’ll stash a chrome-plated, stainless steel flask filled with vodka and sweet ice tea spiked with lemon in the breast pocket of a sport coat.  The flask is decorated with a glossy, full-color decal bearing a reproduction of an original piece of art depicting a woman in calavera face-paint, a flower at her temple and a hummingbird hovering with its beak in the center of the blossom. If you do, by some miracle, manage to encounter the playful spirit from earlier again, you will offer to share.

Your spirits will soar. The Eastside will pulsate with the energy that people like Antonio Pelayo, Ofelia Esparza, Rosanna Esparza Ahrens, and the late Sister Karen Boccalero as well as the organizations behind Self Help Graphics, Hollywood Cemetery and Plaza de la Raza have poured into making Día de Los Muertos even bigger than Christmas from here to San Ysidro. And you’ll look forward to it again and again and again for another ten years.

When he isn’t writing broken-hearted love poems to the one that got away, L.N. Amoratto can be found in the Chicano Resource Center at the L.A. County Library in East L.A. admiring the luminescent exterior and interior mosaic tile mural work of artist José Antonio Aguirre and the artwork by whomever curator Dulce Stein has most recently invited to exhibit inside. Stein never misses, and Amoratto swears she has access to powerful brujería, the kind which allows her to see through his eyes and gives her a curatorial sensibility that has no equal. Ofrenda artwork from top by Isaac Pelayo, Rafa Ruiz and Zoro Rodriguez. Images courtesy of Antonio Pelayo and on view at El Velorio. Opening Saturday, Oct. 12, 2019, Plaza de la Raza, 3540 N Mission Rd, Los Angeles, CA 90031
American Art Antonio Pelayo Chicano Art Craft Beer CuratorSpeak Día de Los Muertos East LA Art Gonzo Journalism Latinx Lit Lincoln Heights Plaza de la Raza