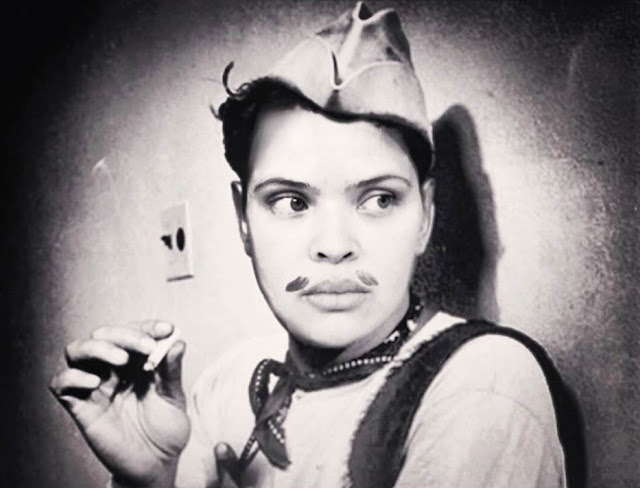 Gurba as Cantinflas from Painting Their Portraits in Winter. Photo courtesy the artist.

Ed. Note: The following exchange between Myriam Gurba and resident alchemist, seer, arts writer and keen cultural observer @pancho_lipschitz AKA Harry Liflan, was originally published in our Nov./Dec. 2016 (Vol. 7; No. 8) print edition. We proudly offer a reprisal of a conversation that, strangely enough, foreshadows Gurba’s searing critique gone viral of American Dirt by Jeanine Cummins, the floodgates of justifiable indignation from the Latinx literary community it opened, the dismissive excoriation by publishing industry elites determined to paint her as the leader of a dangerous, book-burning lynch mob, and the tangible threats of violence she has been subjected to for simply having had the audacity to offer her honest--and brilliantly elucidated--opinion about a literary work she was asked to review. We now all know that her opinion was repudiated because, as she was told, she lacked sufficient literary celebrity to pen a review that failed to identify any redeeming aspects of the fiction novel that had earned Cummins a whopping seven-figure advance, and which, upon closer inspection, seems to have cribbed true-life happenstances from non-fiction works by several Latinx writers for dramatic effect. Brooklyn & Boyle has, for twelve years, proudly featured established and renowned artists in a range disciplines. We are just as proud to have profiled or featured emerging artists who have subsequently gone on to achieve widespread acclaim, Myriam Gurba being just one of many.

Dear MacArthur Foundation nominating committee, I’m writing to let you know about the queer Chicana poet, writer, essayist, performer, photographer, Instagrammer Myriam Gurba. You haven’t given her one of your awards so it’s clear that you people are not geniuses. Perhaps you’re not familiar with her work so I’ll give you a quick rundown.

She has published two books of poetry; Wish You Were Me and Sweatsuits of the Damned. Her first collection of stories Dahlia Season is a literary kick in the gut or perhaps one aimed a bit lower. Her essay on why Chicanas avoid experimental literature wrestles with the question, what happens when a feminist, lesbian, Chicana walks into a Hooters with Gertrude Stein to meet her cismale boyfriend; yeah it’s complicated.

Her most recent book; Painting Their Portraits in Winter, is a collection of ghost stories, family stories, La Llorona stories and a feminist re-imagining of Juan Rulfo’s Pedro Páramo. Her visual work, which was shown at the Museum of Latin American Art in Long Beach, consists of self-portraits in which she photographs herself as familiar visual icons such as Lucille Ball, Cantinflas and E.T.

Her recreations are instantly accessible but upon further inspection show how inserting a queer, feminist, Latina identity into popular culture is a transgression, and a radical act in itself. Her presence is a reminder of what is absent and her difference points to a pervasive sameness.

I met her at an old timey diner in Long Beach, the city where she lives and teaches, to talk about art and poetry and how to prepare for the incoming administration.

PL: What made you want to do your take on Pedro Páramo?

MG: I grew up hearing about that book over and over and over and over... Everybody in my family is sick of that book. My abuelito went to seminary with Juan Rulfo and that was as close as my grandfather came to fame; sitting beside it in the dining hall. He was a two-bit poet and he never could let go of that. Up until his dying days he was always telling these Juan Rulfo anecdotes that we were all so sick of. And because my grandfather worshiped at his altar I was super turned off.

Eventually as an adult I thought maybe I should just read the damn book. So I did. I was like, ‘Oh my god, this book is incredible.’ This book embodies the Mexican consciousness because it’s a consciousness of death. And voice is central to it because voice is completely unmoored. You don’t know who is speaking, or from whence they’re speaking. You can’t really tell who’s dead and who’s alive. I love that.

But at the same time that book represents Mexican patriarchy for me because of my grandfather’s extreme love of it and his near worship of Rulfo. So I wanted assert my love of my grandfather by appropriating that text, while simultaneously slapping him in the face by doing a feminist interpretation of it. That was where my motivation came from; a love and a hate for my grandfather.

PL: Is La Llorona the Frida Khalo of ghosts?

MG: I don’t think she’s the Frida Khalo of ghosts. I think she’s the foil to la Virgen de Guadalupe. She’s the opposite of that life giving force. She’s the life taking force, which I find really awe inspiring, because the ultimate female taboo is infanticide. So as a little girl I was scared of her but also magnetized. I wanted to meet her. I wanted her to pick me.

PL: Your work seems to check off a lot of different check off boxes (woman, lesbian, Chicana, feminist) and take pleasure in going outside of those boxes.

MG: I really enjoy sharing discomfort with people. And I like using art to share discomfort. I feel uncomfortable a lot of the times but one of the things that provides relief is shared discomfort. When you feel like you’re holding hands in your discomfort. I feel like art is a particularly useful avenue for that. My favorite art is art that creates that feeling.

Also, having membership in all these little Balkans, I’ve felt that cliche of not belonging my whole life. Only because I fit in an in-between space in so many ways when it comes to different chunks of my identity. Sitting in that in-between space often makes me feel like I’m outside of every space. I feel like not belonging frees me up to try to belong to everything. Anybody can try to claim me just a little bit or vice versa, I can try to claim anyone or anything.

PL: You do a variety of things in different media. Do you have a desire to try and capture all of them together in some form.

MG: Yeah I would really like to do something that is multi-modal. To have a large exhibit of varied media or to put various types of work into one book. There’s a Los Angeles press that is going to publish some of my poetry and some of my hybrid work and they might also include some of my visual work. But I think something in vivo, like to occupy an art space would be really cool. That would be a dream.

PL: I see a lot of contemporary artists who are fracking the bones of Duchamp so to speak who don’t realize that while his work was intellectual, it was also sexual, beautiful and even political.

MG: I did a piece based on Duchamp. It’s an image of myself that is very sexualized; a neo-pinup-y image where I’m crouched in a very accepting kind of pose. And then R. Mutt has signed my neck. So I’m a urinal (laughs). A lot of folks don’t get that reference so they see it as sort of a sexy image and not necessarily one in which I’m invoking myself as a urine catcher.
And it’s like, ‘Wow you’re being turned on by a urinal.’

PL: What preparations are you making for the coming of Trump’s America?

MG: I’m going to be attending a workshop about making art under fascism. I also joined a reading group to force myself to continue reading political material. And then I’m thinking about buying a gun.

Follow Myriam Gurba on Instagram @deviledegg666 and on twitter @lesbrains. Read her blog lesbrain.wordpress.com. Finally, open your wallet and pick up her latest book at your local bookstore. (But if you have to order online, it’s on Amazon.) Follow Pancho Lipschitz, on Instagram @pancho_lipschitz