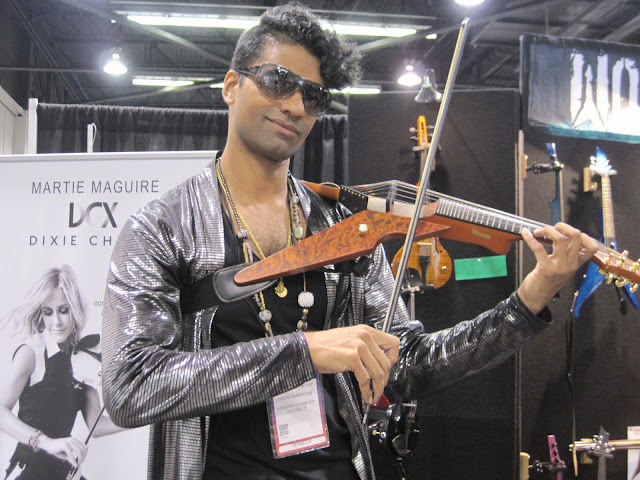 If you’re a music industry aficionado and have never attended a music trade show, consider this for your bucket list. NAMM (National Association of Music Merchants), a non-profit trade association founded in 1901 hosts “the world’s largest trade-only event for the music products, pro audio and event tech industry” in Anaheim annually, a convention which is, hands down, the place to be. This event is renowned for offering ample opportunities for anyone and everyone to learn about the latest in musical instruments, gear, technology, music education and fabrication.

It’s also an opportunity for the biggest name brands in the industry to showcase their latest releases.

NAMM is held annually in mid-January at the Anaheim Convention Center. The 2020 NAMM Show began officially with a unique  prelude event held on Tuesday, Jan. 14th. The evening ceremony brought NAMM members, local educators and students together in support of an initiative developed with the Anaheim School District to provide expanded music making programs for school children. Predicated on an effort to ensure children benefit from a more well-rounded education,  NAMM generously donated $10,000 to Horace Mann Elementary, a predominately Latino school, a gift specifically intended to enhance the grade school’s music education curriculum.

One of the most anticipated acknowledgements of the evening went to a “true renaissance woman,” a description offered by Foundations Executive Director Michael Braunstein about Les Paul Innovation Award recipient Joni Mitchell. The prestigious award was presented to the legendary singer-songwriter by equally renowned jazz composer and virtuoso musician Herbie Hancock.

So there we were on Thursday, January 16th, in a fast-moving line for the official convention participant badge for the first day of the event. This year, the trade show was arguably the most captivating if the several I’ve been able to attend over the course of several years. Upon entering the Anaheim Convention Center and exploring its various levels, elaborate exhibitor booths, stands and full-on stages equipped for live performances and special hotels exhibition suites, our senses were pushed into overdrive, and I felt that euphoric sensation that can only come from a world of over-stimulation.

Due to the amplification, each booth must maintain a certain decibel or risk being shut down since there are three levels of pure sound coming from a wide range of musical instrumentation and demonstrations grouped according to the larger instrument families such percussion, woodwinds, string, brass and keyboards, while being complimented by various other showcases featuring electronic gear including but no limited to audio, concert stage lighting, amplification and technology.

Music by nature creates inclusion and NAMM offers inclusivity, neither of which can be effective without the other. Just stroll through the exhibitor booths and you’ll see a variety of cultural instruments. Deepak Ramapriyan, an Indian composer, multi-instrumentalist and multi-genre vocalist performed at the Wood Violins booth where he took their latest model Viper seven-string electric violin. In his opinion, “music is a universal language…everyone in the world does music, I think because of that, this is automatically an inclusive festival.” He was also quick to point himself as an example of NAMM’s efforts to ensure people of diverse ethnic backgrounds felt welcomed.
Several other professional musicians shared the same sentiment. Rudy Sarzo, Cuban bassist for Ozzy Osbourne, Quiet Riot, DIO and Whitesnake spoke in his native tongue and felt “La música no tiene color. Lo que tenemos es corazón y poquito accento que sale en la música también” East L.A.’s own Sin Quirín, Mexican-American guitarist for Ministry, Lords of Acid and Revolting Cocks just had two words to say about diversity at NAMM, “Not enough.”

Dino Cázares, guitarist for Fear Factory, Asesino and Brujería has been attending NAMM since the ’90s and is very pro-mexicano, “I’ve been lucky because I haven’t experienced any kind of racism towards me cause I’m Latino.” Solo recording artist, Ronny North is a Mexican/Spanish guitarist who feels “the Hispanic community is well represented. They have a whole room of Hispanic instrumentation and singing.” 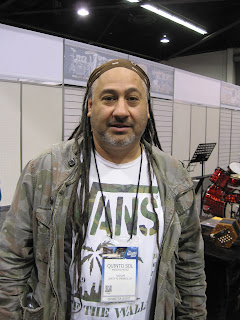 Some musicians had a slightly different take. Martin “Limón” Pérez from Chicano Reggae band Quinto Sol feels that Latino and Mexican cultures are very underrepresented “due to the fact that some of the companies out there can’t really afford to be here and they’re still struggling out in the neighborhoods building their craft and building their instruments in the hood.” But he still encourages those companies to come and mingle even if they don’t feel accepted. (Pictured left: Martín Pérez. Photo by Lori Gonzales) 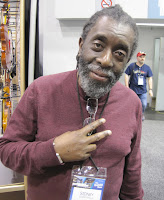 Sidney Mills is a British Jamaican keyboardist for Steel Pulse feels strongly about NAMM reaching out to underprivileged areas in different countries because they cannot afford to be here. He mentioned that “there needs to be a format or forum where they can be reached cause there’s a lot of schools that could use this company to help in a school program with instruments.” (Pictured right: Sidney Mills. Photo by Lori Gonzales)


Many companies do try to be inclusive. Bullet Cable has been a vendor for 22 years. They showcased their latest Bullet Cable 30’ Gearmanndude signature white Coily Cable of Love and sponsor a few Hispanic artists such as Bass Player Juan Alderete (Marilyn Manson, Mars Volta) and Marco Mendoza (Thin Lizzy, Ted Nugent). When asked if they had an opportunity to sign any Hispanic musicians  this year, according to Jason Parriott (sales), he mentioned “We had four different groups come through last 2-3 days. They’ve taken the information and will get in touch with the CEO.”

This event is not open to the general public. Attendees must be active members or pre-qualified non-members invited by a member or sponsored by an exhibiting company. Hmm… Don’t you think it’s time to call in that overdue favor?
Anaheim Convention Center Music Industry Trade Show NAMM Show 2020