Meet the OG Aunt Bea of Boyle Heights, Young at 97! 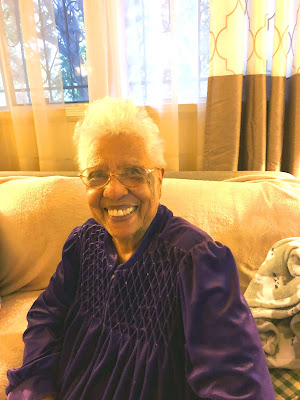 
Boyle Heights - African Americans Were There, our organization, seeks to develop a historical perspective documenting the early arrivals and the continuous influx of our elders into this vibrant and multicultural community.

Through stories, pictures and more, we work to present the facts surrounding our existence. We work to restore our history. And equally as important, we work to educate the public.

Please contact us (626) 296-2777 with stories or other information regarding African Americans in Boyle Heights.

The stories of Black families in Boyle Heights have a common thread—moving from Boyle Heights but coming back to the “home place,” race relations, and the unique ability to never be too far away from their local relatives.

African Americans N Boyle Heights - We Were There stories focus on where they worked, where they came from, their hopes and dreams.

All African Americans who lived in Boyle Heights didn’t necessarily grow up there. Many of the “Old Timers,” like 97-year-old Beatrice McBride (pictured above, photo courtesy of Shirlee Smith), came when they were older to join family members. Beatrice came from New York in 1945, when she was 23. She came to live with her mother, Edith Williams, on North Savannah Street in the close-knit neighborhood where many of our people settled.

“It was way different” from life in The Big Apple, says Aunt Bea, as she’s called. Unlike New York, “Boyle Heights,” she says, “was slow and friendly. People knew their neighbors. Everybody knew everybody. If you passed someone on the street, you stopped to say a few words.”

“People had time for each other,” she says.

Back then, there were no refrigerators or freezers, and the ice man brought ice for the ice box. Walking to Currie’s Ice Cream shop on the corner of Soto Street and Brooklyn Avenue was considered a real treat—nobody dreamed of a day when ice cream could be kept at home.

With a flair for reminiscing, Aunt Bea says life was simple, with the Helms man bringing the bakery goods and the vegetable man bringing the produce right to your street. The milkman delivered milk, in glass bottles, right to everyone’s front porch.

Those, she says, were the days when all these people knew their customers and took the time to talk with them.

Aunt Bea’s quick to recognize what she calls “turning back in time” to today’s home deliveries of groceries and even cooked meals.

Aunt Bea keeps up with current times, but isn’t quite ready to trade in her memories of the Helms Bakery truck man for a Grub Hub scooter kid, she says.

Boyle Heights lifestyle was so different that Aunt Bea says she longed for the hustle and bustle of New York—the comfort of a familiar place, where, she says, “everybody was in a hurry to get somewhere.” So like many other African Americans who settled in Boyle Heights, she left.

Living may have been slow and relaxed but Aunt Bea says the African American elders were fast to keep the young adults in line.

A dress code? Yes, it was unwritten but strictly enforced.

Once and only once did twenty-something Aunt Bea try wearing shorts in public.

“I only went across the street to Miss Marshall’s, who had a small church on Savannah Street, and I was in shorts,” she remembers. “Boy, was that risqué. You bet I didn’t do that anymore. The grown folks got on me about that. You had to cover yourself up.”

But the elders did more than just execute and expect adherence to a dress code; they also expected manners and correct speech—this meant profanity was not tolerated.

A common practice in the neighborhood, back then, was the caretaking of relatives old and young. Aunt Bea married twice but had no children of her own. She took on the care of her niece, Carolyn, and still provides care for her.

“Of course I still do,” she says. “I promised my sister that I would, as long as I lived, care for her child—well, she’s very much not still a child.”

There are many constant threads I hear in the stories of Boyle Heights and one of those threads is Evergreen Cemetery.

Some tell stories of the cemetery as a picnic ground, a lover’s lane or place to procure flowers (from graves) to sell on the corners in downtown Los Angeles, Aunt Bea remembers being taught to drive (shifting and clutching) on the nar­row winding roads.

Seldom discussed are the wealth of social activities Evergreen burial grounds were used for.
On the traditional side, Aunt Bea continually visits the cemetery to place flowers at the grave sites of her family members.