It's Time to Form the People's Councils and Empower the Streets 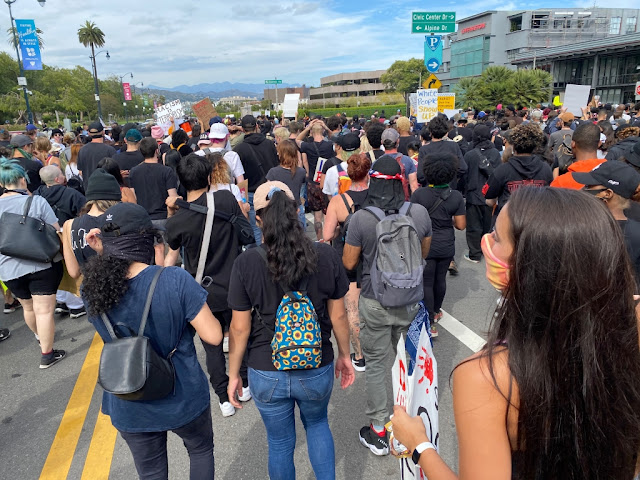 “Now is the time of the furnaces, and only the light can be seen”-- Jose Martí

The death of George Floyd in Minnesota as the result of nine asphyxiating minutes underneath the knee of a police officer has again lit the spark of popular rage across the imperial United States. From east to west the republic has seen in city after city the bonfires of tensions stemming not only from the country’s violent and complex racial history, but its class divisions as well. Inevitably Los Angeles has seen its streets swell with the justly angered.

More than any other great American city, the greater L.A. metropolitan area is a microcosm of the social forces that have shaped this country and are in constant clash. Its wealth and poverty, its cosmopolitan character, its mixture of U.S. gringo culture and scores of municipalities as well as countless streets bearing Spanish names, all define us as one of the key American hot zones.

We have known police corruption and violence for decades. African Americans, Latinos and Asians have all lived under the shadow of Big Brother’s baton. Journalists like Ruben Salazar remain iconic martyrs from social unrest of years past. So the question we must pose is, what will we do this time after the smoke has cleared? What actions will we take as communities once the fires are put out and we return to avoiding illness in this year of the plague?

While the issue of race understandably dominates the headlines in this latest chapter of American insurgency, the mainstream media and capitalist press quickly ignore the other great elephant in the room: class. Just look at the figures in the economic fallout of the Covid-19 pandemic. Latinos have been the hardest by the unemployment wave following the virus’s arrival. 1 in 5 Latinos are now unemployed for a staggering 18.9 percent. Poverty and inequality are killing faster than the police. Every major study reveals that African-Americans and Latinos are the communities most impacted by the new coronavirus strain.

Meanwhile, before this weekend's stunning mass demonstration in the upscale Fairfax/Wilshire shopping district, all was calm and relaxed on the west side of Los Angeles, where the well-to-do strolled down Rodeo Drive, confidently weathering the viral storm with their cache of stock and savings. In the farther reaches of Ventura County, you wouldn’t even know the world was on the brink of social and economic implosion.

Instead of sneering at our silk-dressed neighbors however, what we must do is apply new pressure on the political ruling class. Only when we have power over the structure and funding of our communities can we truly begin to advance. To do this we must begin to think beyond mere electoral politics where two parties dominated by corporate and Machiavellian habits keep the ballot boxes to themselves. The Democrats will not save us and neither of course will the Republicans with the blonde emperor, obsessed in the evenings with walls and Twitter, at the helm.

Even the most honest and committed among our representatives in state government can only do so much within the halls of government bureaucracy. And while California prides itself on a “liberal” government, even Gavin Newsom is forced to pull funding from school programs to fund other social necessities, all because the centers of power cower before truly demanding that the billionaire class contribute to society.

In essence what we must rediscover is the art of the council system. Here in East Los Angeles we are not incompetent or incapable of self-organizing when necessary. Once lockdown commenced it was inspiring to see local businesses form their own safety procedures such as the distribution of hand sanitizer and gloves, or demanding patrons wear masks for service. Now we must go further and form a local people’s council. As Hannah Arendt once described it, the council system is the oldest and purest form of revolutionary power, beyond the slogans of parties or ideologues.

Organizers and all locals should take part in the formation of a new form of popular government. The council must hold local elections where the people choose from among themselves its members. Candidates can declare themselves at an organized assembly. Any venue is viable, including the public libraries which are closed anyway. The people’s council must designate seats for various sections overseeing culture, public safety and the formation of new social programs for students, the homeless and the poor. These councils, if instituted, would function as truly organic and equitable bases of power in any community choosing to adopt them.

And these would, naturally, then link to City Hall to organize the distribution of funds and aid, which we must demand the right to secure. Only when we begin to form people’s councils and similar structures of organized governance, will our communities not only cease feeling abandoned by the central powers that be, they will in essence be empowered. The councils must include a diverse selection of community members, defined by merit and not by social class or status. This can give a voice to artists, economists, doctors, and also the builder, the handyman, the librarian. All are eligible to run for a space in the people’s council, and if a member fails in their duties, their tenure can be revoked and new elections called.

In times such as these, it would be undoubtedly essential for the council to have a people’s safety branch, which can help with local security and coordinate with police yet also function as a watchdog against police brutality. The councils must also unite with communities from the entire, diverse patchwork of our city, be they Middle Eastern, Asian, European, etc. This is an international city and requires an internationalist spirit to survive.

These are mere sketches for what could be accomplished if we come together after these nights of blazing streets and shattered glass. Progress must come from channeling our righteous rage towards real empowerment, where communities need not feel helpless before the iron fist and jackboot of authority, because they will be their own authority. James Baldwin once warned of “the fire next time.” Now that it dawns as a spontaneous, beautiful revolutionary flame, we would do well to give it the focus needed to create a legacy of lasting progressive change.