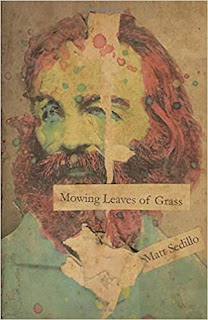 In Mowing Leaves of Grass Matt Sedillo gives us something special. More than a book of poetry about a lived experience, more than a powerful insight into life as a Chicano growing up in the barrio, Sedillo combines a unique awareness of the Chicano experience, rooted in race and class, with an intellectual critique of American society and history. And the poet pulls no punches. We quickly learn from his verse that he is servant to no master; he is an iconoclast willing and ready to pull the curtain away from any Oz America might be shrouding in its past.

“And I didn’t come to make friends; And I didn’t come to hold hands; I came to talk shit,” Sedillo writes in the poem “Raise the Red Flag.” His honesty is not latent. We don’t need to muse over a cappuccino while wondering what his verse means—it is clear and often brutal.

If you know your ancient poetry, this is like Catullus calling out the poser poets in his time. Poems like these will likely cause some academics to squirm. Too honest? I don’t think so. We are living through a dangerous and pivotal moment in US history, where racism is in our faces and flat-out violent.

If Trump is a constant and unapologetic liar, we know that the untruths he spews arise from a warped sense of elitist entitlement and an unequivocal belief in white supremacy. We need historians and poets in our time to stand as a bulwark against lies and the historically latent fascism that now thrive in the open. In my estimation, Sedillo is at the vanguard, as both poet and historian. Whitman heralds “Poets to come! orators, singers, musicians to come!” in his now classic Leaves of Grass with a poem titled “Poets to Come.” With Mowing Leaves of Grass, Sedillo assumes his rightful place among them.

Charging through the front door symbolically, he arrives to let the gatekeepers know the groundskeepers are on their way, and like him, we are pissed. We have sharpened our literary lawnmower blades, and it won't matter whether we're on the guest list or not. Our labor as essential workers, poets and college professors will no longer be taken for granted, minimized or exploited to enrich the oligarchy. Our cultural and historical contributions will be celebrated and recalled. And we are willing, as the title cleverly implies, to take down statues or remove the occasional sacred cow to make way for brighter, healthier public gardens destined to replace them.

Like Virgil leading Dante through the levels of Hades, Sedillo guides you on a tour of hellish American history—from the perspective of the oppressed, silenced, lynched and deported. A visceral satisfaction accompanies a reading of Sedillo’s verses, one rooted in their implicit revelations. A reader's journey can be likened to that of John receiving the vision of the Apocalypse on Patmos but enlightened by a glimpse of the glorious rebuilding that will follow the destruction. You must pass through Purgatorio and Inferno on your way to Paradiso. I do not say this lightly—like John, Matt is a prophet. Werd.

Sedillo fills his poems with allusions to the American past. Indeed, Mowing Leaves of Grass would work well in any class dedicated to real history, taught by professors with social justice in mind. History is political. The teaching of history is a political act. Even the old White Guard who pretends that they are unbiased in their approach to teaching history, willingly leave out the contributions and stories of Black and Brown men and women. The simple omission of history is a political act on their part.

As historians, poets and educators it falls upon us to unearth the histories of colored and marginalized people in this nation and include them in American history, not as a footnote or as an addendum but as major threads woven into the American tapestry, as vital elements of the greater American story. Sedillo realizes this and his passion for the task is rife throughout this collection. It is virtually impossible to read Mowing Leaves of Grass without feeling the enthusiastic stridency embodied by the author ablaze on every page.

As a historian who also identifies as a Chicano, I cannot help but be reminded of “I am Joaquin” by the late Corky Gonzales. The epic poem dedicated to the Chicano experience sparked a revolution and provided the foundation for an emerging sense of identity among tens of thousands of Brown youth during El Movimiento. I wish Corky were here to read Mowing Leaves of Grass. I imagine Corky and Matt sitting down in East LA at some corner bar working their lines, back and forth over shots of tequila, rhyming, rapping, their voices rising and spilling out into the street.

Corky: I am Joaquín, lost in a world of confusion,/caught up in the whirl of a gringo society,/confused by the rules, scorned by attitudes

Matt: I am the as yet unwritten vengeance of Elvira Valdez/The best laid plans of Modesta/The reckoning of Santa Cruz

Corky: I am Cuauhtémoc, proud and noble,/leader of men, king of an empire civilized/beyond the dreams of the gachupín Cortés,/who also is the blood, the image of myself./I am the Maya prince.

Patrick Fontes, PhD, is a professor of American History.