Tranquil and dotted with the tall trees from which it takes its name, Sycamore Grove Park greets visitors with a quiet peace and a pleasant stillness. The park appears to offer more wide-open space than it really has, a result of its proximity to Debs Park, which stretches over the crest of the highest nearby hilltop visible directly across the 110 North. Until recently, more than half of Highland Park residents were children, grandchildren or great-grandchildren of either U.S.-born Mexican Americans or Mexican immigrants. These often gathered their families on warm summer weekends under the shade of a Sycamore or at a picnic table for birthday parties, baptismal celebrations, ball games, and carne asadas.

Others came in pairs on missions of courtship and romance. Some drove in from neighboring East Side neighborhoods or rode public transit to the park on pilgrimages to the big blue “lonchera,” a husband and wife operated food truck that has served up legendary Mexican-style seafood to park guests and walk-up clientele at the same curbside spot for 26 years. Running through it all like a radiant cultural thread linking all our parks and our neighborhoods and our lives with a shimmering arc of sound has been the music, a soundtrack with Mexican Ranchera, American Rock & Pop, urban Hip-Hop and Latin Jazz on heavy rotation.

Los Angeles City Councilmember Gil Cedillo has been a life-long aficionado of Latin Jazz. But as a representative of the First District--which includes the community of Highland Park--and a staunch advocate for the arts, he has cultivated an appreciation for an eclectic range of musical styles. The Boyle Heights-bred former labor union organizer turned elected official regularly features artwork by local school children on the walls of his field offices. When he was asked to do a walk on cameo in the film version of Water & Power by playwright and Culture Clash comedy trio member Richard Montoya, Cedillo agreed because, for him, the arts matter. 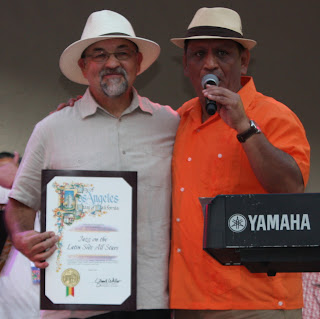 Yet despite all the proverbial “slings and arrows,” it is evident that Cedillo hears and understands the soundtrack, registers it as a musical melange or medley capable of delivering us to places where we will see our humanity restored or propelling us headlong into beautifully challenging yet ultimately inspiring and rewarding experiences and situations we hadn’t realized we were prepared for already. In my case it was literal. I wrote about music for the alternative weekly in Austin. That took me to Mexico City and Chiapas where I wrote about Mexican rock and Zapatismo, which led to a story about a Texas band that had successfully effected a reverse-crossover, becoming huge in Mexico, despite humble beginnings in a north side Houston beer joint. That band later hired me as their publicist, a move which eventually led me to L.A. From photo to left: José Rizo (l.) accepts a commendation from Councilmember Cedillo.

Cedillo, meanwhile, was busy broaching the idea for a Latin Jazz and music festival with his staff and community leaders such as Sandra Figueroa, Executive Director at El Centro del Pueblo as well as composer, band leader, and music producer José Rizo. Creator and host of the “Jazz on the Latin Side” radio program airing Friday and Saturday nights on KJAZZ (KKJZ 88.1 FM), Rizo was in regular contact with a vast network of world-class Latin Jazz masters and eventually agreed to begin producing the two-day event. Featuring luminary artists such five-time Grammy-nominated and Grammy-winning West Coast percussionist and vocalist Poncho Sánchez, former Santana lead-singer Andy Vargas, Susie Hansen and Chicano Batman, along with many others, the inaugural Latin Jazz & Music Festival was held in late August, 2014 at Sycamore Grove Park. And it got progressively better each consecutive year after that.

In response to the global pandemic and the measures being taken to minimize health risks and possible spread of the COVID-19 infection, the 7th Annual Latin Jazz & Music Festival will be livestreamed online tonight from 6 p.m. to 8 p.m. Please make note of the time change. The event Councilmember Gil Cedillo, the live event will feature performances by Jose Rizo’s MONGORAMA, a big band named in honor of legendary percussionist Mongo Santamaría and a performance by the Gilbert Castellanos Latin Jazz Ensemble, as well as interviews with individual artists. The following list includes all the platforms on which the livestream Latin Jazz concert can be viewed: