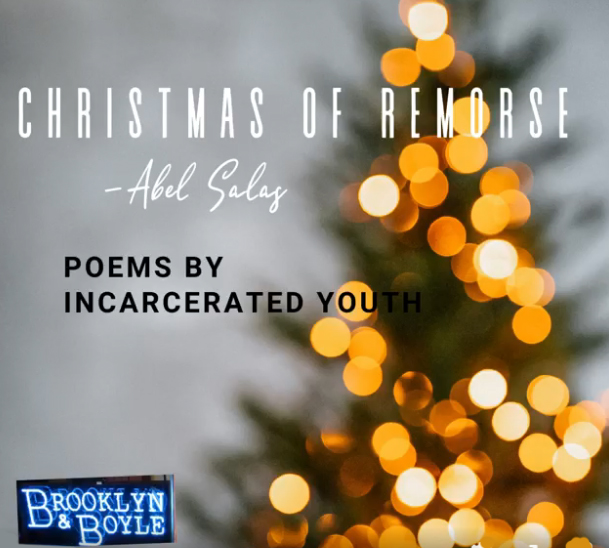 A Christmas of Remorse

An audio story for the holiday season by Abel Salas

Once in a while, I like to remind myself that poetry can and does changes lives. It also saves them. This radio piece, artfully produced and edited by Queen Kim, aired originally on "Pacific Drift," a KPCC-FM program highlighting unique aspects of So-Cal life and culture. It was re-broadcast on a subsequent, even cooler program called "Off-Ramp," a uniquely inspiring show created by local public radio luminary John Rabe. Roughly 16 years ago, the young man whose poem you'll hear at the start of the piece asked me to be a witness at his confirmation, a Catholic rite of passage, which would take place in a gymnasium at a detention center for minors in Lincoln Park.

At only 14 years old, Edderic AKA Erick, had been incarcerated there, a much more severe facility than the one in which which the holiday visit recorded for this audio story occurred. We'd met during that early first stretch in a juvenile detention facility to which he's been remanded for tagging, charged with destruction of public property and criminal vandalism. By agreeing to add my signature to the formal document acknowledging his completion of the Catechism classes in advance of his confirmation and vouching for his successful efforts to study and learn Catholic doctrine, I assumed a role reserved for a godparent or godparents. By agreeing to present myself as a sworn witness and attend his confirmation, I assumed a role generally reserved for a child's godparent or a godparents. These are normally selected by a child's biological parents soon after birth and they accompany a godchild's birth parents to a baptismal ceremony wherein a toddler is blessed with holy water by a priest and welcomed into the Catholic religion.

Although Edderic and I don't make reference to it in the radio story, I had become his godfather roughly three years prior to visiting him Yucaipa youth reform camp because he had not been baptized as a baby.  Brought to the U.S. as a three-year-old, he  voluntarily  consigned himself to a life in Mexico when he reach legal age rather than face inevitable prosecution and deportation as the result of infractions committed while was still a minor, infractions which have since been declared designated misdemeanor offenses rather than felony crimes. He continues to thrive, however, as the father of two young children in Baja California. I was proud to publish some of his more recent poetry in the December, 2018 print edition of Brooklyn & Boyle. And I was able to finally, in 2020, hand deliver him one of the only two remaining copies of the issue in which his Spanish-language poem, "Aquí todo está oscuro (Here Everything is Darkness)" appeared.